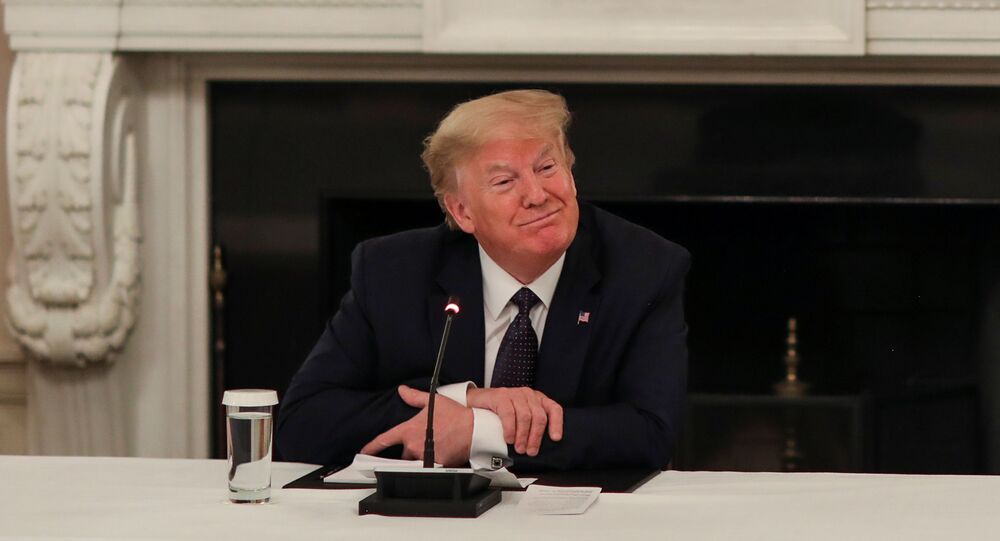 The mainstream media in the US has mainly questioned the Trump team's recent call to "trust" POTUS to restore the economy after the pandemic ends, yet few outlets have bothered to dissect what the administration has already done to prevent the economy from collapsing.

The coronavirus pandemic has ruined Trump's perceived strong point in this year's presidential election, that POTUS greatly boosted the country's economy over the last four years. Even the most optimistic of forecasts do not foresee the restoration of the economy to pre-2020 levels by the end of the year, apparently forcing the campaign to switch tactics - it's now urging people to "trust" that Trump can make the American economy "great again".

While with this new call Trump is essentially requesting a credit of "trust" from voters, yet is there something that can serve as collateral in this case? Trump's handling the coronavirus-induced economic crisis may be such collateral. Here is what the president's administration has done so far in that regard:

Possibly one of the Trump team's biggest achievements is that it went to great lengths to prevent as many businesses as possible from going bankrupt due to the drop in economic activity. The administration requested several relief packages from Congress that not only received bipartisan support, but even a $1 trillion boost during the discussions.

The first relief package handled one of the most vulnerable areas of the economy - small companies that were getting squashed by falling profits. On 11 March, Trump announced that small business would be receiving low-percentage loans and would be able to defer their tax payments in some cases, if they had been affected by the pandemic.

Jonathan Ernst
The sidewalk is seen empty during dinner hour at Ben's Chili Bowl, whose founders Ben and Virginia Ali famously kept the restaurant running through very difficult times in the past, as the eatery navigates the coronavirus disease (COVID-19) outbreak with no seating, limited hours and help from a federal Payroll Protection Program Loan in Washington, U.S. April 30, 2020.

These relief efforts received a major boost on 27 March, when the Trump administration extended them to all businesses and threw in direct payments for companies that risked going bankrupt in a $2 trillion bill. American airlines and cargo carriers, which were one of the primary economic victims of the pandemic, were essentially bailed out by the government because air traffic fell by 90%, according to some estimates.

Trump raised the issue of reopening the economy as early as 24 March, less than two weeks after introducing a state of emergency, despite harsh criticism from his opponents. While the consequences of this approach are yet to be evaluated, one thing is certain, the US was among the first countries to work on reviving the economy in the wake of the crisis.

POTUS released his guidelines on restarting the economy on 16 April, giving state governors carte blanche to make a decision on the issue by evaluating the situation in each state individually.

Apart from aiding and bailing out businesses, the relief bills signed on 11 and 27 March also eased the economic burden on ordinary citizens, allowing them to defer taxes and making them eligible for $1,200 payments if they met certain conditions.

© REUTERS / Carlos Barria
FILE PHOTO: A woman looks for information on the application for unemployment support at the New Orleans Office of Workforce Development, as the spread of coronavirus disease (COVID-19) continues, in New Orleans, Louisiana U.S., April 13, 2020

While these efforts had no direct effect on businesses, they supported US citizens' spending thus providing functioning companies with extra cash flow, desperately needed at such a tumultuous time.

President Trump also announced a major shift in White House strategy on 5 May saying that the pandemic response team would be gradually winding down its operations by 1 June, if all goes well in terms of new cases. At the same time, he stated that the group would be replaced by another one - this time specialising not on fighting the coronavirus per se, but its economic consequences.

The new team is expected to focus on reopening business instead of keeping them closed - a measure that could potentially give a jump start to returning to economic growth instead of the almost 5% decline registered in the first quarter of 2020.

While it's not entirely clear how much the Trump administration influenced this move, the Federal Reserve on 15 March announced that it was slashing its key interest rates to 0-0.25 and that it would be buying hundreds of billions of dollars in bonds in a bid to aid the American economy as much as possible. The Fed noted that the new tactic will be in effect until the economy starts to recover from the pandemic without setting a specified or approximate date.

The move received high praise from Trump, who said it was "really great [news] for [the] country". Prior to that, however, POTUS had put a lot of pressure on the Fed, mulling removing its chief from office for allegedly not doing enough to help the economy.

#WalkAway Founder: It's Time to Open Up & Let Trump Get US Economy Back on Track