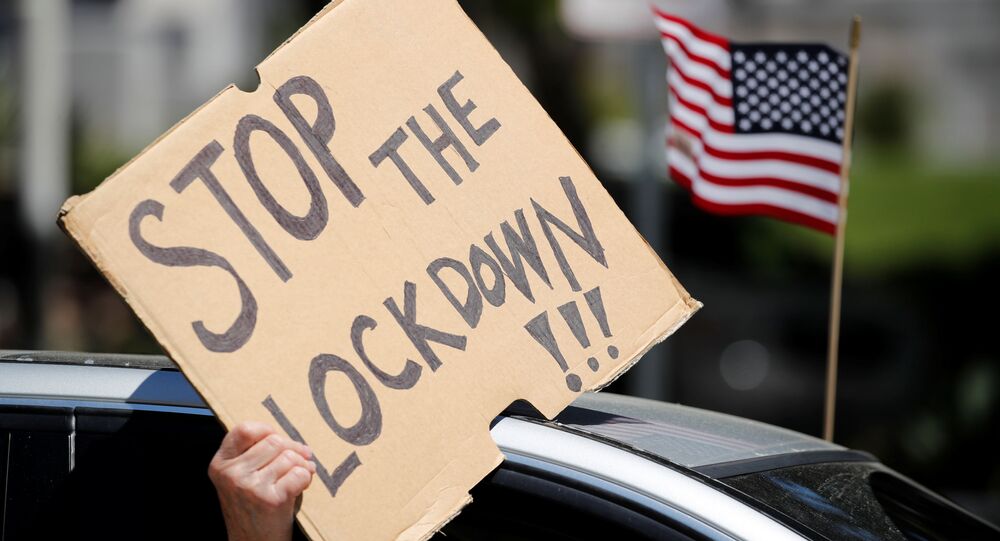 #WalkAway Founder: It's Time to Open Up & Let Trump Get US Economy Back on Track

The figures for COVID-19 cases and deaths in the US are soaring, but so is the unemployment rate, which threatens to hit 20% in the second quarter. Being caught between a rock and a hard place, Americans are taking to the streets demanding to lift the lockdown. WalkAway movement founder Brandon Straka has explained why it's time to open up.

Protesters in California have been denied the right to demonstrate against coronavirus lockdown laws on 1 May even if the participants practice social distancing. According to the authorities, the ban will remain in place until health officials decide it’s safe for people to rally.

Protests are on the rise, as roughly two dozen states have either begun re-opening or are ready to. They are being cheered by President Donald Trump, while others, like Democrat-governed California, Oregon, and Washington are biding their time, citing the spreading COVID-19 infection.

The main purpose of the nationwide lockdown to flatten the COVID-19 curve has largely been reached and now the time has come to let people breathe and get the economy back on track, argues Brandon Straka, a former liberal and founder of the WalkAway movement, which is taking part in anti-lockdown protests.

Sputnik: Why are you against the lockdown measures that have been imposed in California?

Brandon Straka: I’m against lockdown measures as they are, across the entire country. Some of these measures have led to people being fined, people are being threatened legally for either going outside of their house, not wearing a mask; it would depend on which measure you are speaking about.

I think clearly it infringes upon people’s civil rights in this country, number one; and number two, the whole purpose of the lockdown, as it were, was to flatten the curve in this country. In other words, to reduce the number of cases so that we could get to a manageable level, which we essentially have done at this point.

I think the measures that have been taken by certain governors of certain states in the country are reaching far beyond what the intended goal was. Now we are at this point where people need to get back to work, people are really suffering economically, and in many others ways. We can’t just stay in a state where people are not allowed to go outside of their house, or are being fined a thousand-dollar fine for not wearing a face mask.

Sputnik: How important is it, in your opinion, to have the right to protest against these lockdown measures?

Brandon Straka: I think that our constitutional rights as Americans must always be preserved, and in many cases must supersede anything else. Americans, I think, for the most part - it’s pretty remarkable how the vast majority of Americans have adhered to the rules, policies, and the guidelines that were put forward, that we were to stay inside, maintain social distancing, not leave our houses, and the vast majority of Americans did that.

Sputnik: Could police crack down on protesters if they attempt to defy the coronavirus lockdown once again?

Brandon Straka: I don’t think it would have a good result if that is what they try to do. The American people cherish their freedom; the American people cherish their constitutional rights and they are not going to allow a police state to take over and dictate to them what they are and are not allowed to do - particularly when the science is not clear on the actual danger is of being allowed to go outside and doing these demonstrations.

Not to mention the fact that we have an election coming up at the end of the year in November, and I think that any public officials or governors who are siding with police who would be cracking down on people and infringing upon people’s rights, are probably going to be out of a job in November, if this is how they are going to treat their own constituents.

Dems are maligning re-open protesters, the messaging is confusing at best: congregating at Walmart is fine, church is unacceptable, &small businesses should stay closed.

They have a vested interest in seeing economy & businesses suffer-for them, it’s political bait for November.

​Sputnik: How will the coronavirus pandemic affect the outcome of this year’s US presidential election?

Brandon Straka: I really don’t think that Joe Biden poses a credible threat to Donald Trump, and I think that even the Democrats know that. There is much speculation that Biden will not, in the end, be the Democratic candidate, and in the end the Democrats might try and pull something else out of their hat, because even they recognise that he is not a strong contender and that he, with all due respect, does not seem to be very mentally fit right now. I think that people are seeing that on both sides.

The real tale is going to be how the economy bounces back, when we start to re-open everything - which is beginning to happen right now. And Trump has been really great on the economy, he’s been great on bringing back American jobs and I have no doubt that he will knock that out of the park as well once the economy re-opens. That, I think, is what people are going to really pay attention to, how the economy bounces back, and how Trump handles getting people back to work, and I have no doubt that he will nail it. So I think that in the end it will work in his favour.

Brandon Straka: If they were to try to do something like that in the US, I think that it would spark a revolt unlike anything we’ve ever seen before. Living in a country where we have free speech, where we have guaranteed freedoms, as we do in the US, the types of freedoms that don’t exist in any countries besides right here; Americans are born and bred with a sense of individualism and a zest and a fight for their individual liberties.

When those are infringed upon in any way, Americans don’t take it lightly, and they will not ever take it sitting down. So if the government try to introduce any kind of tracking or tracing app, or anything... there have been rumours that something like that might be part of how they are going to contain the virus - Americans would never in a million years stand for it. The reaction that anybody who tried to impose this would get, well they better be prepared, because it is not going to be pretty.

Sputnik: How will society change in the US after the coronavirus pandemic?

Newsflash: Trump is your government right now. There is scepticism that already exists, but what I do think is that, like so many things have happened since Donald Trump was elected, the media in this country have really shown their hand.

They have shown time and time again just how dishonest and divisive they are, but now I think they are really messing with people’s jobs, their businesses, their income, the economy; it’s hitting home for every single person in this country. So I think that people are seeing now when it’s affecting their wallets, their dollars and their bottom line, they are going to start seeing that the media that they have been trusting for so long has been running a scam on them in many ways.

For a lot of people on the right, Donald Trump is one of the few people who we see as somebody who is not a typical politician, certainly not a typical part of the system and the machinery, and that’s why the media attacks him in the way that it does. But this is the reason that so many of us trust him, and look to him for our messaging and for our guidance.

US Stock Futures Rise Pointing to Gains in Morning Trade