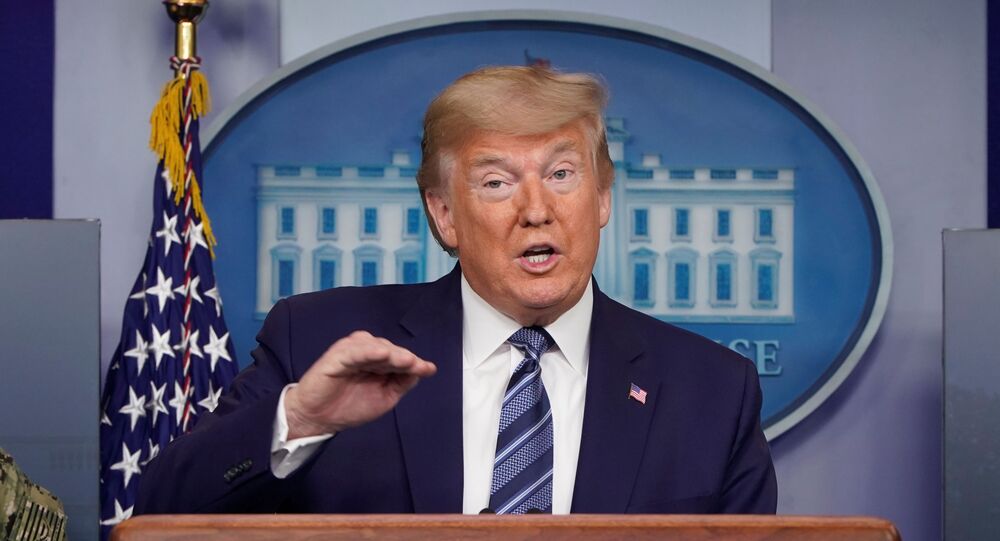 ‘We’re Not Opening Up All at Once’: Trump Announces New Measures to Restart US Economy

US President Donald Trump announced Thursday the presentation of a phased guide for steadily lowering restrictions on movement and social interaction in US states as the COVID-19 novel coronavirus outbreak recedes.

Trump told reporters at the White House on Thursday that his administration had produced a three-stage set of guidelines for US states to individually judge when it is appropriate to reopen their societies and economies from the stringent rules intended to prevent the spread of COVID-19.

"We are not opening all at once, but one careful step at a time," Trump said.

“Healthy Americans will now be able to return to work” as conditions allow, Trump said. He noted the plan will protect the highest-risk Americans while increasingly allowing the military and others to go about their business.

"Every state is very different," Trump said. States can tailor their reopening plans "depending on what they want to do," but "if they need to remain closed, we will allow them to do that."

The plan contains three phases, each with a series of requirements that a given state must meet before it can proceed to the next phase.

​Trump noted that doctors have warned the novel coronavirus might return toward the end of the year, and they would deal with the problem at that time.

Earlier on Thursday, Johns Hopkins University reported that more than 650,000 cases of COVID-19 had been detected in the United States and that more than 30,000 Americans had died.

Trump lamented that the virus had "decimated" many communities, even among his personal friends. "Some are dead, right now. They're dead."

US Vice President Mike Pence, who heads the president's Coronavirus Task Force, noted that guidelines can be implemented by governors either statewide or county-by-county.

Three-Phase Return to 'Our New Normal'

Dr. Deborah Birx, a medical expert on Trump's task force, explained briefly to reporters what each stage of the process entails.

Each stage includes "gating criteria" - that is, qualifying parameters that all states and regions must meet over a 14-day period. This includes a "downward trajectory" of reported cases of influenza-like illnesses, "COVID-like syndromic cases" and "documented cases" or "positive tests as a percent of total tests." Hospitals must also demonstrate their ability to "treat all patients without crisis care" and have a "robust testing program in place for at-risk healthcare workers, including emerging antibody testing."

Phase 1 is not too different from the lockdown period.

In this phase, some employees can return to work in phases, and some specific social venues, such as gyms, may reopen, provided they can maintain social distancing guidelines. However, schools remain closed, and nonessential travel is forbidden, as are large gatherings. Visits to vulnerable groups such as senior centers also remain prohibited.

In Phase 2, states must see a similar 14-day decline in those same "gating criteria."

At that time, nonessential travel can resume, and schools, day cares and camps can reopen, but social gatherings of more than 50 persons are prohibited. Visits to senior centers are also still prohibited. Social distancing must continue as well. Elective surgeries, including inpatient and outpatient procedures, can also resume.

In Phase 3, following the meeting of gating criteria once again, the country returns to "our new normal," as Birx called it.

While maintaining a strong emphasis on personal and public hygiene and a respect for spaces between individuals, people must remain wary of asymptomatic spread. She noted the specific need for "sentinel surveillance" for people infected with COVID-19 around the most vulnerable populations, who she said included the elderly as well as Native communities and multi-generational families in urban communities.

Trump said that an estimated 29 states that retroactively meet the criteria for going to Phase 1 may proceed immediately. "If we see something wrong, we’ll be expressing ourselves very strongly," he warned.

"The White House’s vague and inconsistent document does nothing to make up for the president’s failure to listen to the scientists and produce and distribute national rapid testing," Rep. Pelosi (D-CA) wrote. “The president’s continued insistence on moving forward without testing, contact tracing, demographic data collection and a respect for science and the facts risks further death and economic disaster."

“On March 4th, the House passed our first bipartisan coronavirus response bill focusing on testing, testing, testing.  Six weeks later, we still do not have adequate testing. Sadly, the president continues his assault on the truth and says that we have more testing than any other country, when just one percent of Americans have been tested," Pelosi's statement continued.

“For the good of the lives and livelihoods of the American people, we must insist on the truth.”