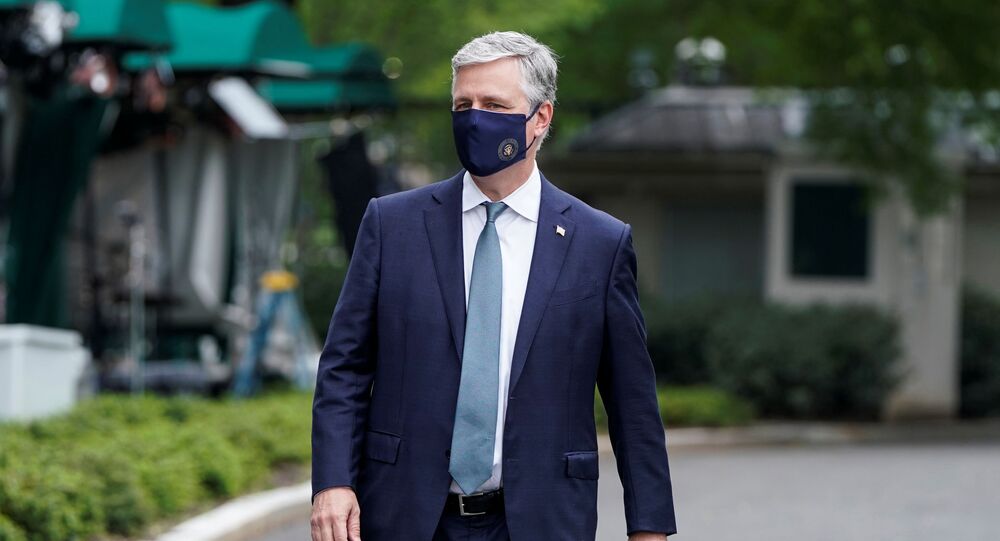 The official’s comments come as the administration of US President Donald Trump has accused the Chinese government of “covering up” an unproven story that the coronavirus (COVID-19) disease originated in a laboratory in the city of Wuhan.

US National Security Adviser Robert O'Brien, during an interview on CBS’ “Face the Nation” on Sunday, compared the response of the Chinese government to the April 1986 Chernobyl nuclear disaster, claiming that "a cover-up" behind the COVID-19 outbreak will be revealed in the future in a some sort of TV-series similar to HBO's "Chernobyl".

“This was a virus that was unleashed by China. There was a cover-up that someday they’re going to do an HBO show like they did with Chernobyl on this virus,” O’Brien told host Margaret Brennan, referring to a 2019 drama television miniseries, produced by HBO and Sky UK, that revolve around the historic Chernobyl tragedy.

In response to a question on whether he was accusing the Chinese government as a whole or local officials in China’s Wuhan province, where the coronavirus first appeared, of the alleged cover-up, the adviser said that the White House does not know, but that they will “get to the bottom of it eventually”.

“We don’t know, because they kicked out all reporters and they wouldn’t let [the Centers for Disease Control and Prevention] investigators come in and they’re still stonewalling investigators,” O'Brien said. “It doesn’t matter if it was local officials or the Chinese Communist Party, it was a cover-up and we’ll get to the bottom of it eventually”.

Asked whether, in case China develops a vaccine against COVID-19, it would be made available to Americans, the official accused Beijing of spying on US efforts in developing a vaccine and treatment for the infectious disease.

“I think we’re going to develop a vaccine first,” O’Brien said. “There’s a chance, and it’s been reported, that the Chinese have been engaged in espionage to try to find the research and the technologies that we’re working on both for a vaccine and a therapy”.

He claimed that Beijing has “a many-year history of stealing American intellectual property and knocking off American technology,” adding that he would not be surprised “if they did that with the vaccines”.

On 14 May, US President Donald Trump announced that Washington might completely cut off diplomatic relations with Beijing over the ongoing coronavirus crisis. He also accused China of attempting to hide coronavirus-related information, and claimed that he had seen evidence that COVID-19 originated at a Wuhan virology laboratory.

Beijing has repeatedly refuted Trump's allegations, with the Chinese Foreign Ministry urging the US to focus on its domestic affairs rather than point the finger at China.

One of worst manmade disasters in history, an explosion took place at the No. 4 reactor in the Chernobyl Nuclear Power Plant in the Soviet Union in the early hours of 26 April 1986.

Although the accident directly claimed fewer than 100 lives, nearly 3,000 square miles of territory in northern Ukraine and parts of Belarus have been depopulated, with 1,000 square miles considered an exclusion zone due to elevated levels of radiation.

O'Brien Says US Ready to Reach Deal With Taliban, Reduce Contingent in Afghanistan This Year

What Do We Know About New US National Security Advisor Robert O'Brien?