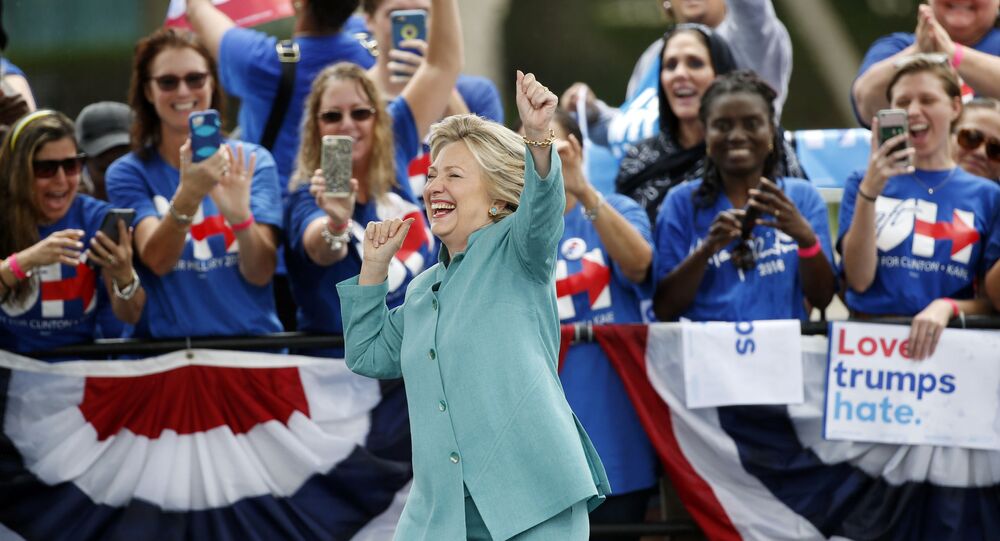 Two one-time rivals for the Democratic presidential nomination in 2016, Hillary Clinton and Bernie Sanders, exchanged some barbed remarks on Tuesday, as the former Secretary of State claimed that "nobody" liked Sanders, while the Vermont Senator pushed back, noting that the former first lady was entitled to her point of view.

Former secretary of state Hillary Clinton offered some clarification on Tuesday night regarding her previously-made remarks slamming Democratic presidential hopeful Sen. Bernie Sanders, I-Vt., seeming to suggest she was ready to aid the Democratic Party ahead of the presidential election.

"I thought everyone wanted my authentic, unvarnished views! But to be serious, the number one priority for our country and world is retiring Trump, and, as I always have, I will do whatever I can to support our nominee," Clinton tweeted.

I thought everyone wanted my authentic, unvarnished views!

But to be serious, the number one priority for our country and world is retiring Trump, and, as I always have, I will do whatever I can to support our nominee.

​Earlier, while promoting a four-part Hulu documentary series about her life and career, the former First Lady stoked up some heat as she fired a barrage of criticism at the Vermont Senator - her 2016 rival - when asked if she would "endorse and campaign for him" if he were to win the Democratic nomination in 2020.

During an interview published by The Hollywood Reporter (THR), Hillary Clinton said that she was "not going to go there yet" as the "very vigorous" primary season is still underway, adding:

"I will say, however, that it's not only him, it's the culture around him. It's his leadership team…It's his online Bernie Bros and their relentless attacks on lots of his competitors, particularly the women. And I really hope people are paying attention to that because it should be worrisome that he has permitted this culture -- not only permitted, [he] seems to really be very much supporting it.”

During the interview for the media outlet, Hillary Clinton was reminded that in the aforementioned documentary, "Hillary", set to premiere on 6 March, she had also targeted Sanders, claiming that despite being in Congress for years, he “had one senator support him”.

“Nobody likes him, nobody wants to work with him, he got nothing done," says Clinton in the series.

When asked by The Hollywood Reporter if that statement still holds, Clinton responded:

Democratic 2020 US presidential candidate Sen. Bernie Sanders was quick to push back at Hillary Clinton after her statements, while noting that the former secretary of state was entitled to her point of view.

ABC News quoted Sanders as saying that “on a good day, my wife likes me”, while underscoring that he’s currently focused on the Senate impeachment trial rather than on Clinton’s opinion about him.

Netizens were quick to weigh in on the verbal exchange between the two one-time presidential rivals. Some took to social media to post their agreement with Hillary Clinton’s criticism of Sanders.

Thank you Madam President...and I agree with all you said pic.twitter.com/tmxKKSp4K6

Completely agree. And I do value your unvarnished views.

Sincerely, THANK YOU for your words today.

You said what needed to be said about the toxicity that surrounds some of Bernie's staff and supporters. It's a real problem and it won't go away by ignoring it.

And no one currently running for office dares to say it out loud.

Your graciousness knows no bounds. After the way you have been treated it baffles me how much you still want to help us.
Millions of us are blessed to know and understand the real you and we are so grateful to have you Madam President!

Everyone knows you will support the Democratic nominee. Bernie bros enjoy feigning outrage. They didn't care when Bernie Sanders refused to endorse you in June 2016 as the presumptive nominee. You merely stated facts. https://t.co/jBHrWSEPLo

​Other fans on social media were outraged at Hillary Clinton’s “attack” on Sanders ahead of the primaries.

you're trying to kneecap Bernie three weeks before the primary starts after he worked his ass off to get you elected, just go away

​Some users took the opportunity to call out the 2016 presidential candidate on the controversial e-mail scandal surrounding her name.

We would have loved to see your authentic, unvarnished views, in the 33,000 emails you destroyed

It's too bad we weren't so lucky

​Many users sarcastically dismissed the Former Secretary of State as a “has-been”.

When you didn’t win.

We want you to go away.