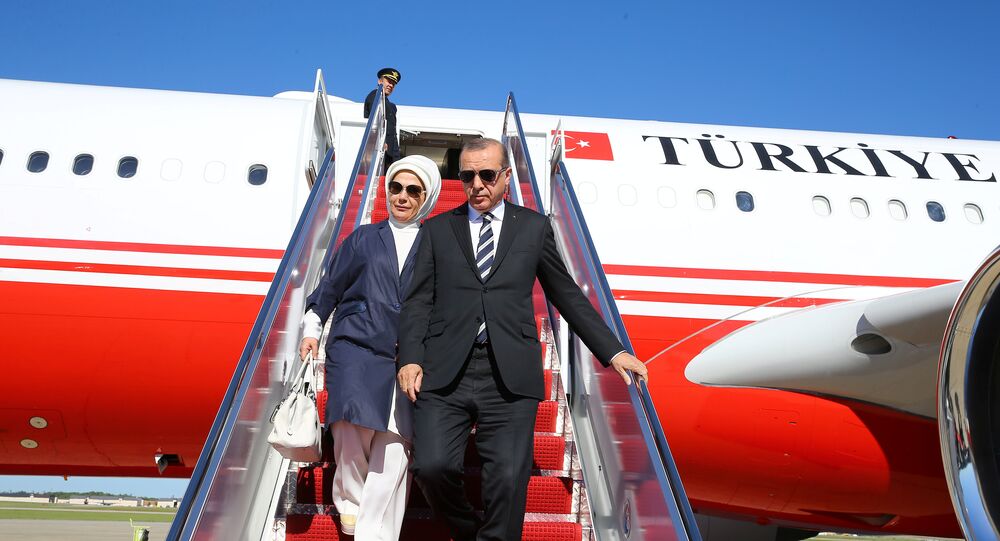 Turkish President Recep Tayyip Erdogan ordered the arrest of 85 energy and education ministry staff as part of an investigation allegedly targeting a "network" of allies linked to a US-based cleric that Ankara accuses of plotting the 2016 coup attempt.

Since the attempted coup, approximately 50,000 people have been arrested and taken to court on suspicion of working in cahoots with or being supporters of cleric Fethullah Gulen. Suspects have ranged in professional positions from judges and lawyers to journalists and even civilians.

Few details have emerged on the latest wave of arrests which followed on the heels of a court on Monday that jailed the online editor of the opposition newspaper Cumhuriyet on charges of spreading "terrorist propaganda." A clear definition for which the court is yet to outline.

In #WashingtonDC for the visit of President @RT_Erdogan to the #US. Our citizens welcomed President Erdogan with great joy. pic.twitter.com/AfhE2AF9ba

The editor, Oguz Guven, will likely languish behind bars with a number of his fellow Cumhuriyet journalists who are already facing serious jail time of up to 43 years in prison, allegedly for the same offense and being ardent supporters of the Gulen. Moreover, a total of upward of 150,000 people, predominantly civil servants and security personal as well as academics have been indefinitely suspended or sacked as part of the wider post-coup crackdowns.

The intensification of the post-putsch crackdown comes during the same week that Erdogan is to travel to the Unites States and hold a bilateral meeting with his US counterpart, president Donald Trump. An agenda of their meeting has been leaked by Turkish media, and it is set to be a packed day for both leaders.

Trump will host a welcoming ceremony for Erdogan and the two leaders will subsequently regret to the Oval Office after posing for cameras. Discussions will center around the calamitous conflict in Syria, but reports suggest that Erdogan's main interests will be focused on the US's recent decision to arm the Kurdish YPG in Syria.

Erdogan is expected to try and pressure Trump to agree to extraditing the Pennsylvania-based Turkish cleric Fethullah Gulen, who Erdogan causes of masterminding the failed coup last July.

#Turkish President #Erdogan was welcomed in Washington. On the agenda with #Trump:

It was no more than two months ago that Erdogan was one of President Trump's biggest cheerleaders. Erdogan saw the Obama administration as indecisive on Syria, and took major issue with its second-term decision to arm the Syrian Kurdish YPG, which is allied with the Kurdish PKK based in Turkey, who the Erdogan government accuses of terrorism.

© AP Photo / Emrah Gurel
Erdogan Wants to Change Trump’s Mind on Arming Kurds, But Will it Work?
However, the Trump-Erdogan honeymoon was short-lived. Last week, Erdogan has some of his top intelligence and military brass travel to Washington to try and convince the Trump administration to sideline its policy of arming Syrian Kurds for the upcoming Raqqa offensive against Daesh, but to no avail.

Erdogan's justice minister also propounded "new" evidence to support the request for the extradition of Mr. Gulen from the US to Turkey. According to reports, the US Justice Department thanked him for providing the evidence but gave him no news of what was going to happen next, if anything.

A Turkish official said that the purpose of the visits was to "pave the ground for fruitful discussions between the two presidents."

"We were hopeful; now we are in a crisis period," he said, alluding to a widening rift in US-Turkish relations.

However on Friday, May 12, Mr. Erdogan appeared optimistic, saying that "we have sent a delegation ahead to the US and they have held meetings with officials. However the highest level of discussions will be held between President Trump and me." He added that their face-to-face meeting would be a "milestone."

Analysts are holding out little expectation that President Trump will press Erdogan to change his ways on the post-putsch mass incarcerations and muzzling the press. After Erdogan's success in the recent referendum that grants him with executive powers, Trump said that he will be "respectful" of the domestic actions of other governments.

© REUTERS / Charles Mostoller
US based cleric Fethullah Gulen at his home in Saylorsburg, Pennsylvania
It is likely that from Erdogan's perspective, a chief objective of the talks with Trump will be to try and secure the extradition of Mr. Gulen to Turkey, which Erdogan would be able to sell at home as a major victory against coup-plotters and subversives. It is expected that Erdogan will ask Trump to heed some requests already made by the Turkish government, such as the questioning of Mr. Gulen by the US Justice Department and to block weekly videos that Gulen uploads to the internet for his supporters in Turkey to see.

For Erdogan, the Trump administration's position on the fate of Gulen will be the acid test that will in part determine the future of Turkey-US relations.