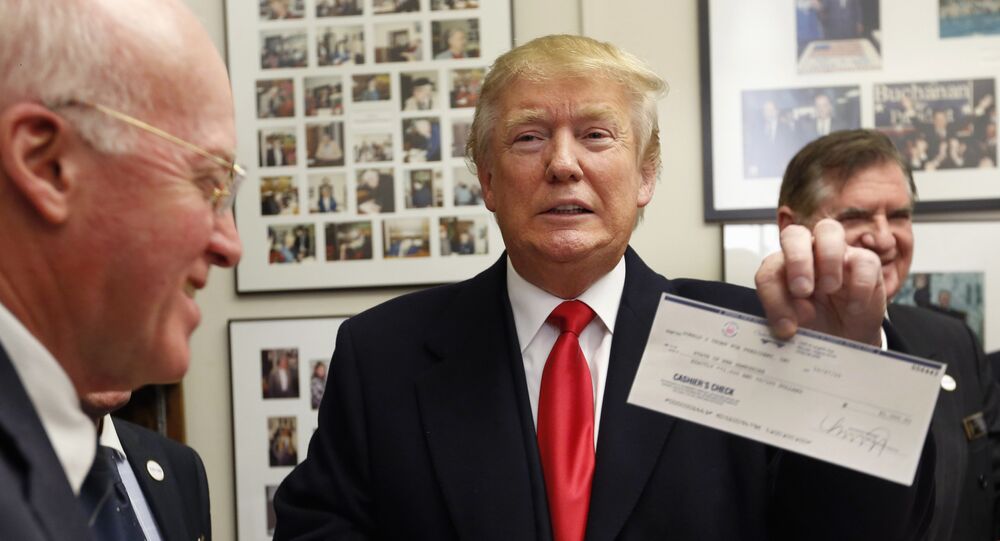 Trump Sues Panamanians for Millions on Grounds of 'Criminal Conspiracy'

US Republican presidential hopeful Donald Trump is no stranger to lawyers. Soon after he made comments about Mexican immigrants being "rapists," Spanish-language network Univision severed ties with the billionaire. Trump’s response? Lawsuit.

In what is becoming a familiar trend, Trump has now filed a claim against hundreds of condo owners in Panama City’s Trump Ocean Club for criminal conspiracy.

According to the Associated Press, the claim seeks $75 million in damages on the grounds that the condo’s directors had wrongfully terminated Trump’s company from its position managing the complex.

The owner’s board of directors maintain that the termination was due to Trump’s managers consistently going over budget and giving themselves bonuses without permission from the board.

While Trump had previously indicated that his company had no interest in filing claims against the hundreds who live in the building – the tallest in Central America – he has apparently had a change of heart.

"Unfortunately, the only way for Trump to exercise its rights was to take the action that it did," said Alan Garten, the Trump Organization’s general counsel, according to the AP.

Garten also said that the claim was supposed to have been confidential, and whoever blew the lid would be liable "for substantial damages over and above what is claimed in the statement of claim."

Needless to say, those who live in the Trump Ocean Club aren’t exactly thrilled about becoming embroiled in a $75 million suit.

"I never thought this would happen," said Al Monstavicius, a retiree who bought a unit in the building, according to CBS News. "I thought it was pretty safe, because we had Trump involved."

Given that Trump is essentially suing his own building, the case can seem a little confusing. But it’s actually the third time Trump has taken Trump to court.

In the 1990s, he sued his ex-wife Ivana Trump for $25 million. The claim accused her of "willful, deliberate and surreptitious disclosure" of details about the couple’s finances. She had allegedly signed an agreement not to speak publically about their relationship.

Even more bizarre was litigation Trump filed in the 1980s. After discovering the existence of a pair of small business owners named Julius and Edmond Trump, Donald went on the defensive.

"Plaintiffs have used the Trump family name for 40-50 years in the New York area. More recently, the Trump Organization has come to stand for respectability and success across the United States," the complaint read, according to Fortune magazine.

"The defendants are South Africans whose recent entrance in the New York area utilizing the name 'the Trump Group' can only be viewed as a poorly veiled attempt at trading on the goodwill, reputation and financial credibility of the plaintiff."

That case was eventually thrown out.