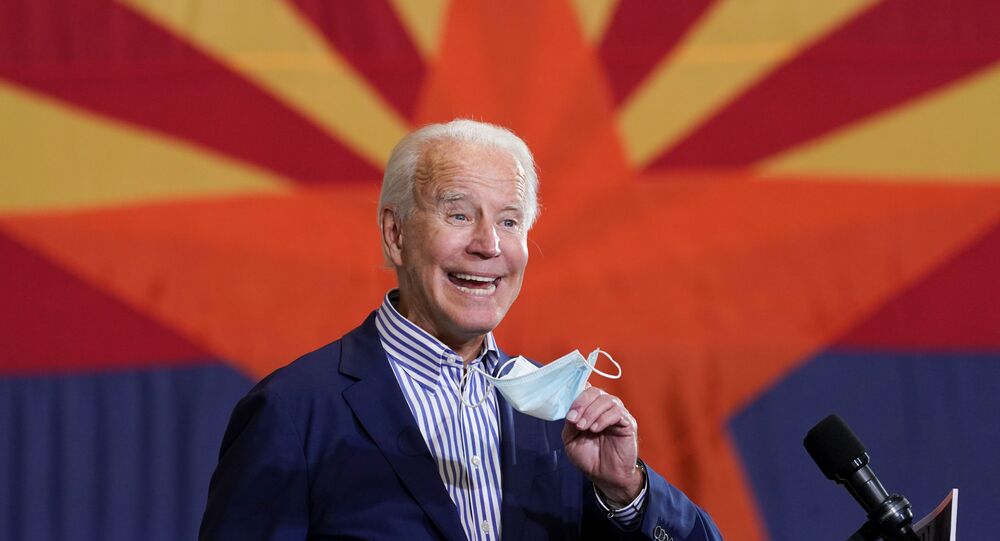 The development comes as the Trump campaign filed a lawsuit in the most Democratic-leaning county in Nevada, accusing local officials of restricting election observers and changing the tolerance level in ballot sorting machines, which it is feared may result in fraudulent ballots being counted.

Democratic presidential candidate Joe Biden has apparently made another embarrassing gaffe. Speaking on the Pod Save America podcast, the former vice president was asked to address people who haven’t voted or do not plan to vote in the upcoming presidential election. Among other things, Biden said the following:

"We're in a situation where we have put together – and you guys did it for our admi ... the president, Obama's administration before this – we have put together, I think, the most extensive and inclusive voter fraud organisation in the history of American politics".

​The snippet from the interview was posted online and immediately went viral. Many social media users raised alarm over the Democratic candidate’s statement and said they feared that voter fraud may occur during the 3 November vote.

This is very serious. Concerning.🤬

I'm afraid of this really happening

​Others said that the former vice president had checkmated himself and expressed concern over how Biden would communicate with foreign leaders if he wins the upcoming election.

He’s gonna be such a great international negotiator. I can imagine the interpreter’s expression when he/she has to translate verbatim.

​Many users said they felt sorry for the Democrat and contended that the 77-year-old is physically and mentally unwell.

Damn. I feel sorry for him. The democrats should be ashamed for putting this man through this.

I watched the last debate last night on YouTube, and I noticed Biden's mouth did the same thing in the debate; like it spasmed or something - almost stroke like for sudden down turn. This poor man is so not well physically as well as mentally for this job.

​Other users said that statements like this explain why Donald Trump and the Republicans have been repeatedly speaking about the risk of voter fraud in the upcoming elections.

People ask why the President fights so hard in court for ballot integrity? Why we have such an extensive Election Day Operations team? This is why👇 https://t.co/O1VSRuCekk

​Still others joked about how other Democrats reacted to Biden’s statement and wondered what implications it will have for the party.

Every democrat when they hear this man speak pic.twitter.com/hTqTjPRd6r

​Joe Biden is no stranger to making gaffes. He has previously mixed up Iraq with Iran and promised to put 720 million American women back into the workforce, when the entire population of the United States is just 321 million. Recently, the Democrat raised eyebrows when he said that he is running for the Senate and that he got into the upper chamber of the US Congress 180 years ago.