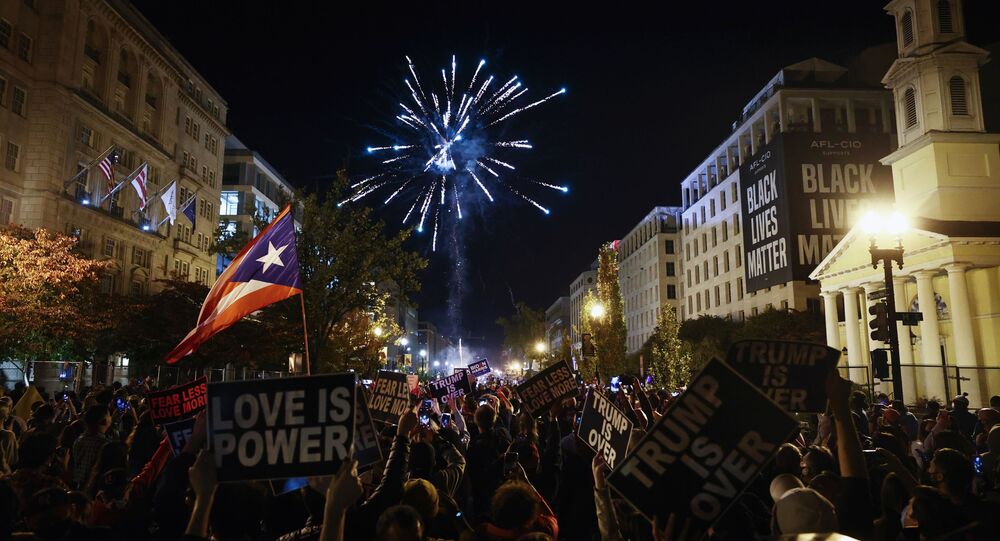 On Satuday, Joe Biden and his running mate Kamala Harris addressed the nation from Wilmington, Delaware. They were presented as "president-elect" and "vice president-elect", after being projected to win the 2020 presidential election.

Residents of multiple American cities took to the streets on Saturday as the media, along with world leaders and celebrities, congratulated Joe Biden and his running mate Kamala Harris on their projected victory in the US presidential election.

While some gatherings erupted into dance parties and celebrations, others appeared to be more tense, sometimes involving standoffs of opposing activists. In other cases, groups of demonstrators were pushed back by the police.

Even though a handful of votes remains to be counted and no official results were unveiled, many have referred to Democrats Joe Biden and Kamala Harris as "president-elect" and "vice president-elect", including the heads of countries like Canada, Spain, the UK, the UAE, and many others.

Some people, according to social media users, took to the streets of New York City to "celebrate the election results", along with apparently burning Trump-Pence flags in New York City.

Some have just set fire to a Trump 2020 flag; others splashing in a fountain.

​In Washington, DC, Black Lives Matter activists also took to the streets with black umbrellas - although forecasts did not anticipate rain, according to social media users.

#Washington #DC
Very large crowd of Antifa-BLM demonstrators moving away from the White House, several of which are dressed in all black ‘bloc’ attire, have umbrella, and several shields spotted.

No rain in the forecast, per locals.

The area around the White House also saw some demonstrations.

​​Videos allegedly filmed in Salem, Oregon, showed Biden and Trump supporters "going on the offensive", and police officers pushing the protesters back.

Tensions are rising at a rally in Salem, Oregon as #Trump supporters go on the offensive against left-wing activists #USElection2020 pic.twitter.com/83x3GaAudM

​Other protests, according to the footage shared on social media, looked more like parties, some apparently Christmas-themed.

this was the first time i heard this song in 2020 and it was absolutely the best possible occasion 🎁 pic.twitter.com/Fb5fd2cDCH

The crowd is dancing and singing to Mariah Carey's “All I Want For Christmas Is You.” @npr @TBowmanNPR pic.twitter.com/BqTIVIi2Lh

Who knew Joe Biden would put and end to social distancing so soon? pic.twitter.com/2I93jPaY10

​On Saturday, Joe Biden and his running mate Kamala Harris, presented as "president-elect" and "vice president-elect", delivered remarks in Wilmington, Delaware, proclaiming victory in the presidential election and thanking Americans for their support, even though official results in the race for the White House have yet to be announced.

Joe Biden Speaks to Nation After Being Projected US Election Winner