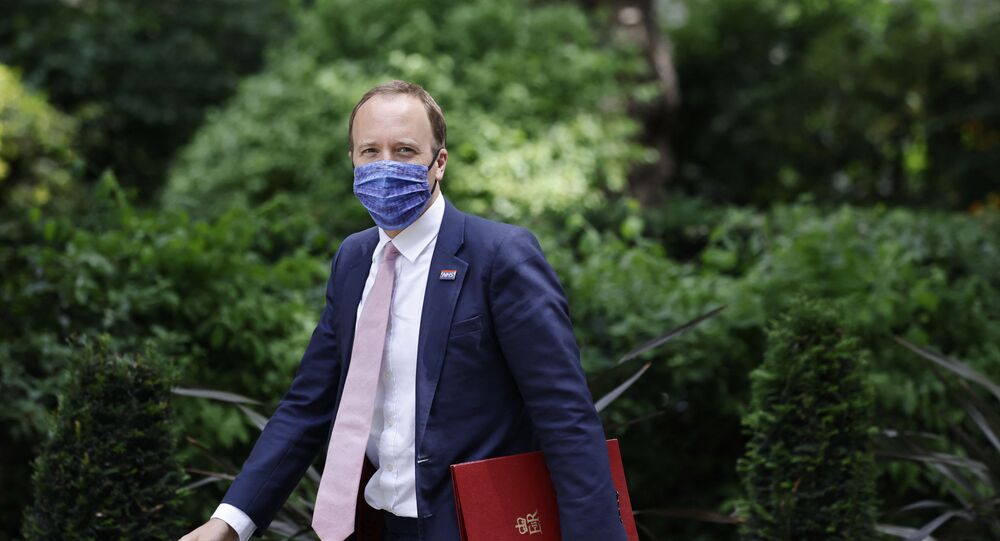 Former UK health secretary Matt Hancock resigned following The Sun’s publication of footage showing him and Gina Coladangelo, both married, violating COVID-19 restrictions that were devised by his ministry, kissing each other at his Whitehall office. Former Chancellor of the Exchequer Sajid Javid was appointed to replace him.

Leaked CCTV footage exposing Matt Hancock’s extramarital affair with aide Gina Coladangelo could have been part of a deliberate plot to oust him by someone motivated by opposition to his stance on COVID-19, reported the Daily Mail.

Images believed to be from a camera inside the former UK Health Secretary’s private Department of Health office and published by The Sun showed Matt Hancock and Gina Coladangelo, both married and with three children, kissing each other at his Whitehall office.

The incident reportedly took place in early May. The smooching was captured at a time when hugging anyone from outside your household was banned, in line with pandemic guidelines.

As Hancock resigned amid the furore triggered by the incident, there have been speculations that the images came from a “rogue” security guard or “whistleblower” staff member at the department.

Now it has transpired that a ‘highly successful’ anti-lockdown entrepreneur allegedly offered the scoop to a prominent political journalist five days before they were published and went viral.

Political journalist and broadcaster Isabel Oakeshott has written in The Spectator to deplore how she missed “the scoop” on Hancock.

According to Oakeshott, she had been sent a compromising picture of the-then health secretary and his aide days before the Sun dropped the bombshell leaked images. A message from a contact of hers - a “highly successful entrepreneur” - had suggested that a “guy” had incriminating footage of Matt Hancock.

Accompanying the text was a “grainy image, no bigger than a postage stamp, of a man in a suit, leaning forward to embrace a raven-haired woman in a figure-hugging dress.” The picture had been sent via an untraceable ProtonMail account. According to the journalist, the image looked “nothing like Matt Hancock”.

Also, the journalist noticed there was something dodgy about the image, which appeared to show an extra hand on the woman’s back. Oakeshott decided the image looked as if it had been doctored, and asked to see more footage of the alleged incident.

While her contact agreed that his source was “probably a chancer”, the original supplier of the video ostensibly discussed arrangements for sending the full video, but instead turned to the Sun.

Isabel Oakeshott was left nursing the fact she had “let down” her contact - an “anti-establishment figure with a dim view of politicians in general and a particular disdain for the architects of the lockdown policy”. She claims the source would have “relished his part in exposing Hancock’s hypocrisy.” She also had to reconcile herself with the fact that this “political scalp” was one that got away from her.

Meanwhile, Emcor UK, the company responsible for security in the building on Victoria Street, confirmed on Wednesday that it was helping the Department of Health and Social Care with its probe into the leak.

It is believed there is a digital record of anyone from among security staff who had access to the CCTV footage in the Department of Health, and might have surreptitiously recorded it on their phone. MPs and security experts have called for a police inquiry into the security breach.

On 26 June the then-UK Health Minister Matt Hancock resigned after he found himself in the centre of an adultery scandal involving his close aide, Gina Coladangelo.

​After British media leaked a photo and video of the pair, both married, kissing in his office and breaching coronavirus guidelines, Hancock was under immense pressure to quit.

In May, when the captured incident ostensibly occurred, England was at Stage 2 of the restrictions, which did not allow gatherings of two people indoors except for work purposes, but only if a gathering was "reasonably necessary".

One senior member of the Conservative Party was cited by UK media as saying it "beggared belief" that the former health secretary, who had prohibited casual meetings during the pandemic for a year, was himself caught violating his rules.

Coladangelo’s appointment in November 2020 had also sparked criticisms of ‘chumocracy’, as Hancock failed to declare he had given the role to his close university friend. She was initially recruited as an unpaid adviser in the DHSC on a six-month contract last year. Subsequently, the woman was appointed as a non-executive director at the department.

Earlier, the embattled Hancock was "targeted" by former top Downing Street aide, Dominic Cummings, who accused him of "criminal, disgraceful behaviour" at the start of the coronavirus pandemic.

Cummings also claimed that PM Johnson had called Hancock "hopeless" over his handling of the first wave of the pandemic.

Since the revelation of the romance between the pair, who have been friends for decades, Gina Coladangelo has reportedly left her husband, Oliver Tress, founder of British retailer Oliver Bonas, to move in with the ex-Health Secretary. Hancock is also alleged to have left his wife.