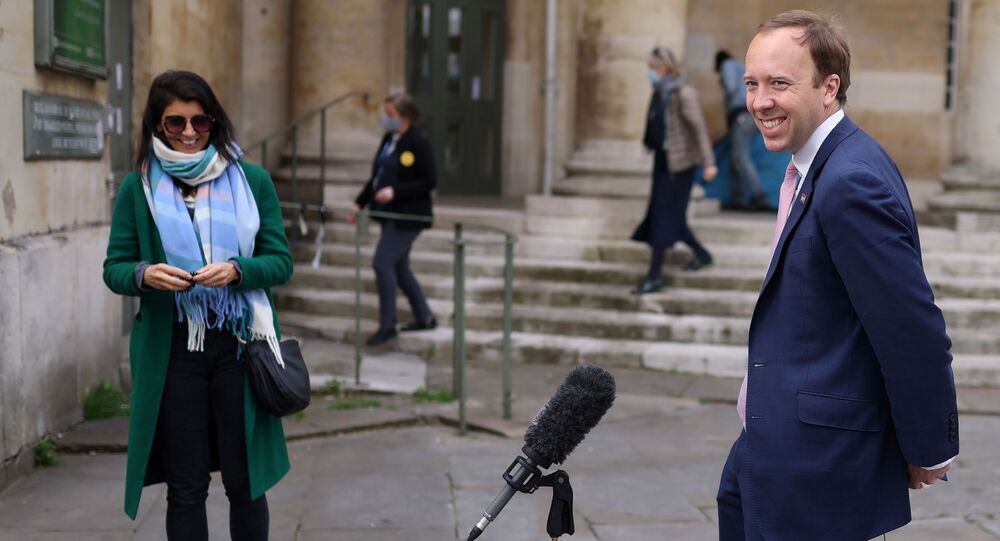 Last week, The Sun published footage showing Hancock kissing Gina Coladangelo, both married, at his office. The report caused a furore as it showed the official violating the coronavirus safety restrictions he himself had devised. Following pressure from fellow MPs the official stepped down.

Matt Hancock's lover Gina Coladangelo has left her millionaire husband as the pair will try to turn their affair into a proper relationship, The Sun has reported, citing the businesswoman's friends. According to the newspaper, she ended her relationship with millionaire Oliver Tress, founder of fashion brand Oliver Bonas, hours after her affair with Matt Hancock was exposed.

Coladangelo was seen loading her car with bags outside their $6.2 million mansion in southwest London. Her husband Oliver is said to be "devastated" by the unexpected split, The Sun writes. The couple has three children.

"Gina and Matt are giving it a proper go and Olly was left reeling. They had lots of friends here so we are all trying to help look after Olly", a neighbour of Oliver Tress told the newspaper.

Matt Hancock's wife Martha is said to be dumbfounded by the recent revelations too. Per The Sunday Times, she had no idea about the affair until the official told her about it the night before The Sun released footage of Hancock and Coladangelo kissing each other. Hancock told her that the affair was serious and reportedly split from her after 15 years of marriage. The couple too has three kids.

British media outlets reported that Hancock and Coladangelo have moved in together.

The publication of the ССTV footage, showing Hancock and Coladangelo kissing prompted concern among Cabinet ministers, who demanded to know if there are cameras in their offices. Since the scandal emerged there have been rumours that the camera recording Hancock's extramarital affair was hidden or planted by a detective and even a rogue state.

However, Cabinet Office Minister Julia Lopez has dismissed these allegations, stressing that the camera in Matt Hancock's office was "not covert" and that the official knew about it.

It appears the statement didn't appease the fears of ministers, who are concerned that government discussions, including on such crucial issues as national security, could be leaked. Northern Ireland Secretary Brandon Lewis said a commission will look into the issue "across government".

Some MPs questioned Ms Lopez's statement that the camera was not hidden.

"Something really doesn't add up here... The secretary of state knew it was there. And yet, we've all seen the video. If that's true, he must be the stupidest man on Earth", said Labour MP Chris Bryant.

Although Matt Hancock resigned as health secretary, the backlash over the scandal continues, with more details coming to light. Several MPs questioned the official's decision to personally hand Gina Coladangelo, who he had known since university, the role of non-executive director at the Department of Health and Social Care.

Senior government figures raised concerns that the couple used taxpayer money during their extramarital affair, The Sunday Times writes. Coladangelo accompanied Hancock to the recent G7 summit in England and the two reportedly stayed at a luxury hotel.

"The role of a non-executive director is to challenge and scrutinise the minister. We need to know if the nature of their relationship was declared and whether the recruitment process was carried out in a fair and transparent way", said Labour Shadow Cabinet Office Minister Fleur Anderson, commenting on the allegations.

Hancock is already facing accusations of cronyism after the Daily Mail reported that he allegedly helped his friend procure a government contract during the pandemic.