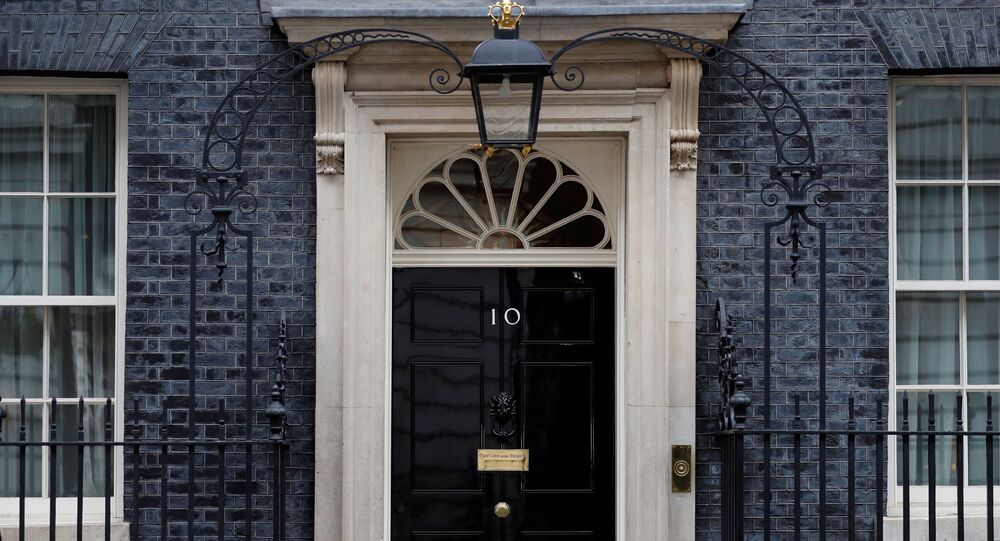 A COVID-19 lockdown was imposed on the United Kingdom in March in a bid to stem the spread of the coronavirus pandemic and relieve the overwhelmed National Health Service, with government minister Michael Gove on Sunday dismissing reports the country was looking to lift restrictions.

While some advocate reopening the economy to mitigate the fallout from the coronavirus epidemic, others insist the respiratory virus needs to be firmly stamped out first.

Cabinet office minister Michael Gove and Chancellor Rishi Sunak are suggested as leading the team calling for ending procrastination and easing restrictions sooner, with cabinet secretary Mark Sedwill more inclined to side with them.

© AFP 2021 / ISABEL INFANTES
An image of Britain's Queen Elizabeth II making her her address to the UK and the Commonwealth in relation to the coronavirus epidemic is displayed on the advertising boards at Piccadilly Circus in central London on April 9, 2020, as Britain continues to battle the outbreak of Coronavirus Covid-19 and warm weather tests the nationwide lockdown as the long Easter weekend approaches. - The disease has struck at the heart of the British government, infected more than 60,000 people nationwide and killed over 7,000, with a daily death toll in England of 765 reported on April 9.

With concerns raised that prospects for a swift rebound after the lockdown are slim, the Chancellor of the Exchequer is cited as having ordered the Treasury to prepare for a possible “U-shaped” economic recovery.

Fears exist that even once restrictions are lifted, those who lost jobs in the pandemic will be hard pressed to find new employment quickly, while still others might not rush immediately back to work.

Debates around the exit strategy centre around the COVID-19 R number, which reflects the reproduction rate of the virus.

Those urging a swifter reopening, like Gove and Sunak, are suggested by government officials as believing if the R number is sustainably below 1 and means the number of new infections is no longer rising, then a relaxing of restrictions can begin to be implemented.

Michael Gove reportedly told ministers “we need to run this hot”, so that new COVID-19 cases would not overtax the NHS’s capacity, according to The Sunday Times.

Insisting that the UK cannot afford another peak of the virus, the opposing team, led by Hancock, is believed to argue for an R number close to zero before any easing of the lockdown.

COVID-19 testing has dominated the arguments, as coupled with tracing of contacts it is key to the exit strategy.

The heated arguments come amid testing capacity shortcomings, as currently the government is able to provide for only 38,000 a day.

On Sunday, though, Gove announced that they were “on course to be able to test 100,000 a day by the end of the month”.

The extended lockdown policy is broadly supported by the public, according to opinion polls, as people fear the stance proposed by Gove and Sunak is too risky.

“Do you take it to zero or do you start to end the lockdown? It’s the biggest policy issue facing the country,” a government adviser was cited as saying.

Advice from the Scientific Advisory Group for Emergencies (SAGE) which is anticipated to weigh in on the pros and cons of diverse exit strategies next week, will guide the government’s timetable for lifting the lockdown.

Cabinet ministers are reported as having “read with interest” a University College London paper co-authored by economists Paul Ormerod and Gerard Lyons, formerly a member of Boris Johnson's informal panel of economic and business advisers.

The paper suggests a “traffic light” exit, with a red phase, during which some shops could open with social distancing, potentially implemented in early May.

An amber phase in late May would allow for people to use public transport while wearing masks, while restaurants could reopen with social distancing.

A full release of lockdown could be anticipated by the time of the green phase, in mid-June, with sporting events, mass gatherings, and perhaps even international travel back on track.

Amidst the divisions in the cabinet, UK Prime Minister Boris Johnson, who is recuperating from COVID-19 at Chequers, will have a challenging mission ahead of him once he resumes work against the backdrop of claims he was conspicuously absent during the worst of the pandemic.

Earlier, the Sunday Times Insight team revealed that Johnson had failed to attend five successive Cobra emergency meetings on the COVID-19 in January and February. Jonathan Ashworth, shadow health secretary, claimed the Prime Minister appeared to have been “missing in action” as the virus spread.

However, Michael Gove told the BBC’s Andrew Marr programme that prime ministers did not always attend Cobra meetings and that Johnson had been kept fully briefed by Britain's Health Secretary Matt Hancock.

“It’s grotesque the idea our prime minister should be portrayed as not caring about this,” said Gove.

According to the World Health Organisation, the UK currently has 114,221 registered cases of the coronavirus, with the death toll at 15,464.