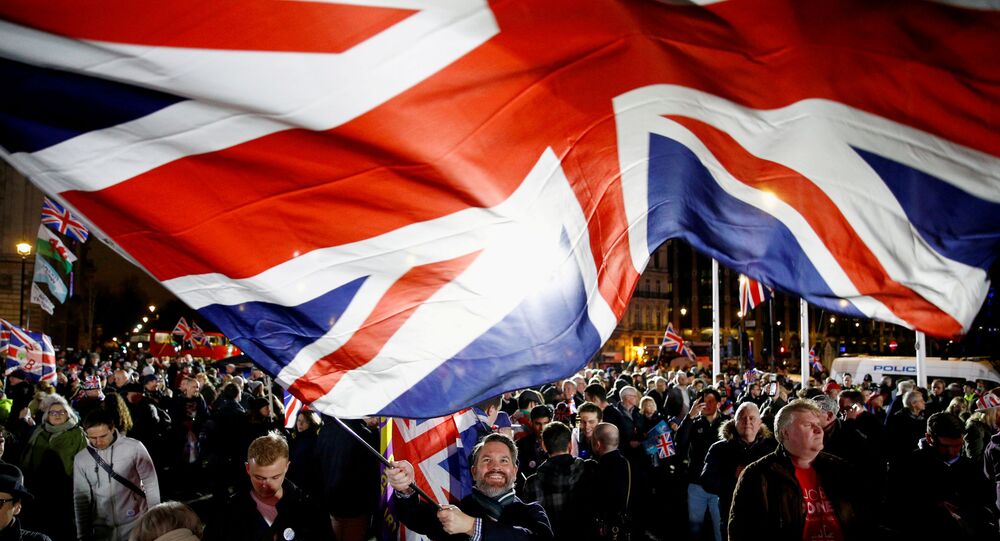 On 16 April David Frost, the UK's chief negotiator, re-iterated Downing Street's stance that Britain would refuse to extend the Brexit transition period beyond 31 December 2020 even if Brussels requested a delay.

The UK government has been deflecting mounting calls to agree to an extension to the Brexit transition period, slated to end on 31 December, with Downing Street basing its refusal to comply in part due to concerns that it would entail "massive" payments to the EU as part of COVID-19 relief aid, The Telegraph reported.

According to a source in the know, paying into an EU budget inflated by the fallout from the coronavirus pandemic was "clearly not in the national interest".

"We need to spend money on our own needs in our own way," the outlet quotes the source as saying.

On 15 April, EU commission president Ursula von der Leyen said the next seven-year EU budget should offer a basis for European economic recovery from the COVID-19 pandemic, adding that the budget needs to "be completely different than how normally European budgets work", including paying larger grants in the first few years of the seven-year cycle.

© REUTERS / POOL New
Start of the first round of post-Brexit trade deal talks between the EU and the United Kingdom, in Brussels, Belgium March 2, 2020

A source close to UK-EU post-Brexit talks was quoted by the outlet as saying:

“It’s clear the EU will be increasing their budget, and bringing in all kinds of packages to deal with the consequences of the Covid 19 crisis. Paying into this new budget when we are no longer a member state and without a say is clearly not in the national interest. We need to spend money on our own needs, in our own way."

"For the British government to agree to pay in to the EU's Covid-19 budget would be political suicide", says ex-member of the European Parliament Nick Griffin, adding that "there simply will not be the money for Britain to hand to Brussels even if [Boris] Johnson surrendered to the EU's outrageous demands" due to the "economic, social and health catastrophe" amid corona lockdown.

Professor of Economic Law at the University of Bristol Law School Albert Sanchez-Graells, meanwhile, believes that the UK’s potential contribution to the EU budget in case of an extension to the transition period "needs to be negotiated and agreed by both parties in the context of the Joint Committee".

"Presumably, the UK’s contribution would be commensurate to the benefits of the extension to the UK and its participation in EU programmes to mitigate the impact of COVID-19 across the EU economy. A rejection by the UK Government to seek a negotiated extension on the assumption that it would be making a net contribution (that is, funding more than it benefits from the extension) ignores that the contribution needs to be agreed by the UK and, perhaps, presumes a weak negotiating position on the UK’s side of the table", Sanchez-Graells elaborates.

According to Chris Stafford, a doctoral researcher at the University of Nottingham in the Politics and International Relations Department, there is no official source that suggests if the UK will subsidise the EU's COVID-19 response while it remains in the transition period, how much it would have to contribute and what benefits it may gain from doing so.

"My suspicion would be that this is still an attempt by the government to not upset their Brexit-supporting voters, rather than a genuine interest in the national interest. Even with the pandemic they worry that delaying the UK’s full departure from the EU might lose them support. They are already under heavy criticism for their response to the coronavirus, so they cannot really afford to make a ‘mistake’ with Brexit here. The act of extending the transition period may be unpopular some voters, and so would having to pay into the EU’s Coronavirus fund, regardless of whether or not this may be beneficial to do", Stafford reflects.

On the contentious issue of fishing rights, as outlined in a future trade agreement between the UK and the European bloc, No 10 is suggested as refusing to publish detailed proposals due to the fact that UK negotiators currently believe there is "no common basis for discussion", while Brussels insists on using the Common Fisheries Policy as the basis for a deal.

The UK government would be reluctant to publish a formal text before the EU agrees to change its stance and acknowledges the need for a "science-based discussion about the future", sources are cited by the outlet as suggesting.

On 14 April the Financial Times reported that some in the EU were concerned that unless the fishing issue is hammered out to satisfy both sides, it might derail the chances of a trade deal being agreed upon by July.

Fishing rights, which are seen as one of the UK’s best areas of leverage in negotiations, were believed to have been omitted from the latest trove of texts sent from London to Brussels, as the sides seek to reignite talks on a post-Brexit future.

Brussels seeks to preserve as many of its existing rights as possible for over 70 types of fish in EU-UK waters, writes the Financial Times, while London would hope to scrap the existing model for dividing up quotas, with many issues open for annual review and debate.

Lack of specific progress on securing access for European boats to UK waters is an issue potentially threatening to undermine existing timelines, according to the report.

"The betrayal of Britain's fishermen would also come at a very heavy political price for Boris Johnson and the Conservative party, but given the already drastically shrunken state of the fishing industry, and the number of surviving fishermen being driven out of business every extra day of lockdown, it may be that giving EU states favourable access to UK waters is something that the government will use to secure some sort of final Brexit deal", Nick Griffin suggests.

COVID-19 Throws Spanner in the Works

Speculations have been rife in the EU that developments around the fishing issue might trigger a need for an extension to the post-Brexit transition period to avoid a no-deal scenario.

The two sides restarted talks after a break in the rounds generated by the coronavirus pandemic, with EU chief negotiator Michel Barnier and his UK counterpart David Frost speaking on 15 April through videoconferencing and agreeing to hold three further rounds of trade talks, starting on 20 April, 11 May and 1 June.

The UK will refuse to extend the Brexit transition period, even if the EU requests a delay, insisted Downing Street, adding that an extension would "prolong the delay and uncertainty" around Brexit.

A spokesman was cited by the BBC as saying that any extension would bind the UK to Brussels’ rules at a time when it "needs flexibility" to handle the coronavirus fallout.

Extending would simply prolong negotiations, create even more uncertainty, leave us liable to pay more to the EU in future, and keep us bound by evolving EU laws at a time when we need to control our own affairs. In short, it is not in the UK's interest to extend. 2/2

​The UK left the EU on 31 January 2020, entering a transition period that is set to end on 31 December 2020. In that time the two sides are to negotiate their future relationship.

Downing Street has consistently said it is committed to agreeing upon a deal by December 2020.

A political declaration on post-Brexit ties was agreed to by Prime Minister Boris Johnson and EU leaders last year, establishing the July deadline for ratifying an agreement on fishing rights.

4,000 Dead Estimate in UK Care Homes Due to COVID-19 Will Prove To Be Accurate, Chair of ICG Says