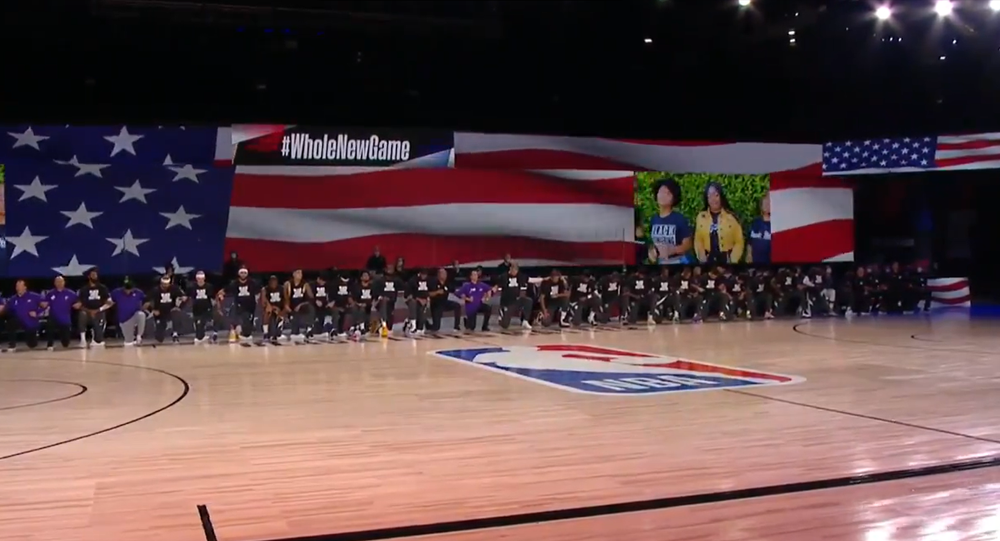 The National Basketball Association (NBA) resumed its season after it was shut down by coronavirus pandemic lockdowns four months ago. The 22 teams are currently based in a so-called 'secure bubble' at Disney World in Orlando, Florida.

The Los Angeles Lakers and the Los Angeles Clippers marked the relaunch of the coronavirus-hit NBA season by kneeling during the national anthem as it played before the game, showing solidarity with Black Lives Matter movement.

Dropping to one knee and wearing black t-shirts emblazoned with "BLACK LIVES MATTER", the players appeared to go against the traditional custom of standing during the national anthem. League Commissioner Adam Silver reportedly stated that the players will not be penalized for their show of support to the anti-racist movement.

"I respect our teams' unified act of peaceful protest for social justice and under these unique circumstances will not enforce our long-standing rule requiring standing during the playing of our national anthem," Silver said.

The @Lakers and @LAClippers kneel during the National Anthem. pic.twitter.com/A0OdsXNKm3

​The words "BLACK LIVES MATTER" are painted on each NBA court, and players are also permitted to wear jerseys with phrases including "I Can't Breathe", "Education Reform" and "Justice Now" to increase the potency of their message.

Many athletes expressed solidarity with the anti-racism and anti-police-brutality movement sparked, in part, by the death of George Floyd, with quarterback Colin Kaepernick kneeling in support for Black Lives Matter for the first time in 2016. Kaepernick was strongly criticized by many and saw his contract cancelled following the season. He has not played in the NFL since 2017.

The human rights protest move by the Lakers and Clippers marked the restart of the NBA season after four months of coronavirus-related lockdown restrictions. To prevent a re-occurrence of the outbreak, a safe "bubble" was designed in the Orlando Disney World for the 22 teams.