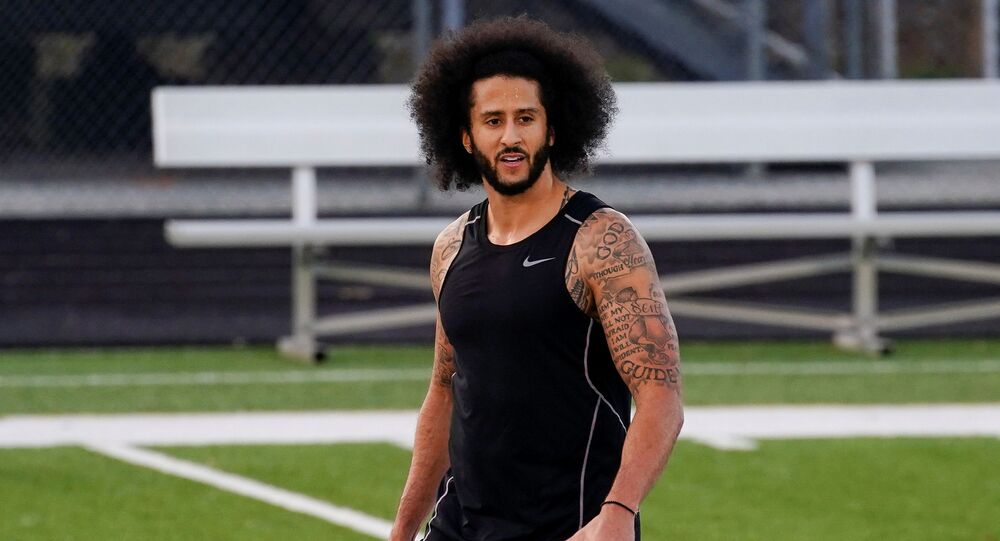 Colin Kaepernick is an American free-agent football quarterback and political activist who first openly supported the ongoing protests in the US against police brutality and racial injustice by kneeling during the national anthem.

Colin Kaepernick, an American footballer and civil rights activist, in his Twitter account expresed his opposition to the celebration of the US Independence Day, saying that "we reject your celebration of white supremacy & look forward to liberation for all".

Kaepernick noted that black people in the US "have been dehumanized, brutalized, criminalized and terrorized". He said that blacks are expected to join the "commemoration of 'independence' while you enslaved our ancestors".

He backed his remarks with a short video showing images of enslaved black people, the Declaration of Independence, Ku Klux Klan members, lynchings, violence and police brutality with a narration of the iconic Frederick Douglass speech "What to the Slave is the Fourth of July".

"Fellow-citizens, pardon me, allow me to ask, why am I called upon to speak here today? What have I, or those I represent, to do with your national independence? Are the great principles of political freedom and of natural justice, embodied in that Declaration of Independence, extended to us?", actor James Earl Jones narrates in the video, voicing the Douglass speech.

Black ppl have been dehumanized, brutalized, criminalized + terrorized by America for centuries, & are expected to join your commemoration of “independence”, while you enslaved our ancestors. We reject your celebration of white supremacy & look forward to liberation for all. ✊🏾 pic.twitter.com/YCD2SYlgv4

​His comments come as the Black Lives Matter movement, sparked by the death of George Floyd - a Black man - killed in the custody of white police, continues to rock the United States, impacting many areas of life and questioning many conventional symbols, such as the role of Confederate personalities and the degree of "racism" in names and brands.

Against this background, some universities have striped their schools of Confederate names, while initiatives to rename streets, airports, military bases and other assets are emerging, with some sports teams pressured or making a decision to change "racist" names, including Washington Redskins or Cleveland Indians.

Is Fourth of July Truly Independence Day for US Blacks, Latinos?