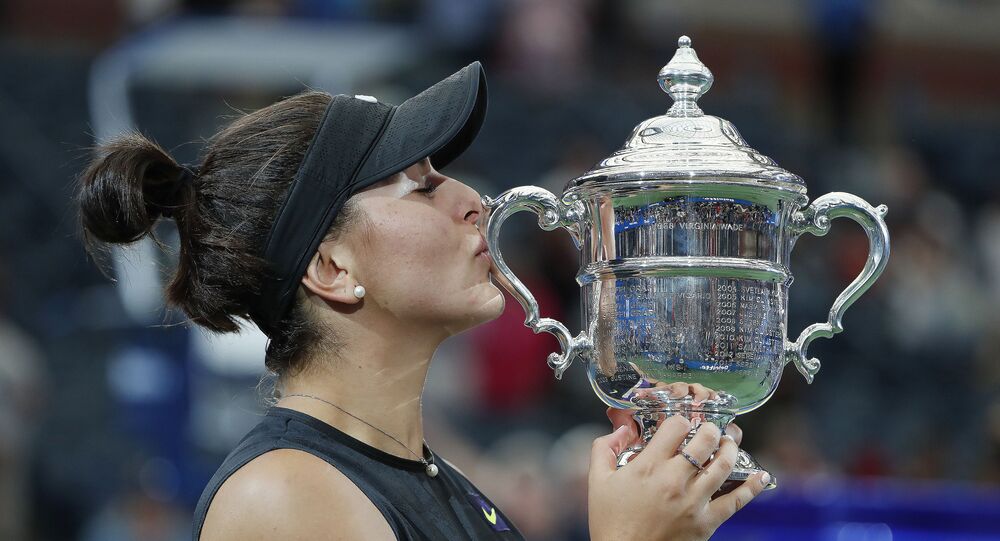 Bianca Andreescu: Top-5 Things to Know About the Canadian Tennis Sensation After Her US Open Triumph

Canadian tennis player Bianca Andreescu had only participated in four majors during her brief career before the 2019 US Open, bowing out a year ago during the opening round of qualifying in all four slams.

Canadian teen Bianca Andreescu has stamped her name in tennis history as she claimed the year’s last Grand Slam at the US Open in a stunning victory over her illustrious rival Serena Williams.

Andreescu upstaged the seasoned American player, who has 23 Grand Slam titles to her credit, in an emphatic 6-3 7-5 final triumph in Flushing Meadows, New York on Saturday.

"I've been dreaming of this moment for the longest time. I really believed that I could be at this stage. Honestly I've been visualising it almost every single day. For it to become a reality is just so crazy," the emotional player is quoted by AAP as saying.

Here's what you need to know about tennis' rising star:

Andreescu, who ranked 15th in the world by the Women's Tennis Association going into the US Open Final, was at number 208 just over a year ago.

The teen had appeared in four majors in her as-yet brief career before the 2019 US Open. Last year Bianca was unable to make it past the qualifying rounds at all of the four slams, winding up the year ranked 178 in the world.

The 19-year-old has since improved her record over top-10 rivals in 2019 to an astonishing eight out of eight.

Earlier this year she had an eye-catching win at Indian Wells, the first time a wildcard has won the tournament.

Canada’s first singles Grand Slam champion, the teenager will shoot up to No. 5 on Monday courtesy of her three titles, winning 45 from 49 matches and now a maiden major.

Andreescu, who credits her mental resilience to a daily ritual of meditation, was born in Toronto to Romanian parents. She spent her early life in Romania, where she first picked up a racquet at the age of seven.

She returned to Toronto, and at 11 was selected for Tennis Canada's national training programme, turning pro at 17.

The two players were pitted against each other before last month at the Rogers Cup, with Serena Williams forced to retire early in the game due to injury.

Andreescu says she has enormous respect for Williams, whom she has idolised almost from the moment she first picked up a racket.
But she is intent on being her own player.

"I think there are some similarities. We like to keep the points short with our aggressive game style. We like to use our serve to our advantage. We fight really, really hard. But at the same time I want to make a name for myself. I'm sure I'm not the only person that's looked up to her. She's truly a champion. Who knows? Maybe I can be even better," said Andreescu.

Andreecsu’s family (including her beloved dog Coco) are her biggest fans.

​Andreescu's mother and father have been cheering her on for years, but recently Coco has also been spotted at her matches.
The teen’s stunning triumph has sent twitter into a frenzy, with users rushing to congratulate following the impressive result.

To think that she’s just 19 and she achieved this feat at her first auditions of the US open.
Watch out world!!!

Hometown hero as "Romanians are everywhere"

Andreescu has a large fan base in both Canada and Romania.

"Romanians are everywhere," she told WTA Tennis. "I've definitely got a lot of love from all the Romanian media, which is nice. It's nice to have two fan bases."

In Canada, her fans have been cheering her with the hashtag #ShetheNorth, in a nod to another Canadian champion, the Toronto Raptors', whose slogan is We The North.

Congratulations Bianca, your play was amazing and you've made all of Canada proud!#SheTheNorth

🇨🇦 Oooooh Canada 🎼🎵🎶 🇨🇦
🇨🇦 Congratulations!! We are so proud of you!! 🇨🇦