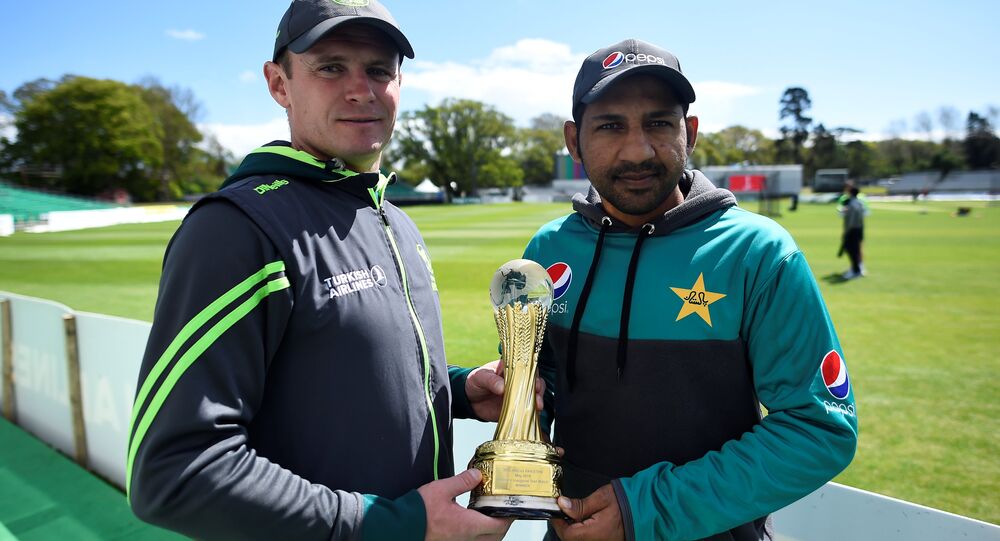 On Friday Ireland's cricketers play their first Test match against Pakistan and next month Afghanistan will also join the elite of world cricket. Sputnik spoke to Irish cricket fan Anthony Kelly about the significance of this moment.

The number of countries playing Test cricket has just gone up to 12 with Ireland making their debut against Pakistan on Friday, May 11, and Afghanistan joining them with a match against India next month.

Anthony Kelly, an Ireland cricket follower who lives in London, said it was a great moment for the two countries but he expected them to be the "whipping boys" of Test cricket for some years.

"Ireland are the 'country cousins' to the English when it comes to cricket. Whipping boys maybe, but there may be some surprises along the way," Mr. Kelly told Sputnik.

History in the making!

Test Debut for each Nation

He said Ireland and Afghanistan would both make ideal opponents for three-game Test series for countries like England, India and Australia who want to "blood new players" and try out new bowlers before sending them out to take on the world's best teams.

Irish cricket has been on the rise for several years.

In 2007 they beat Pakistan in the World Cup — on St. Patrick's Day — in Jamaica and the following day Pakistan's British coach, Bob Woolmer, was found dead in the bath, sparking suspicions he may have been murdered to cover up a match-fixing and betting conspiracy.

Indian skipper Virat Kohli has elected to play for Surrey instead of the one-off Test against Afghanistan. @AmritMathur1 with some pertinent questions that need answers. https://t.co/sIYgQ5slba

Then in 2011 Ireland — which includes players from Northern Ireland — beat England in a one-day international at the World Cup in India, with Kevin O'Brien hitting a century off just 50 balls as Ireland won by three wickets.

In June last year the International Cricket Council agreed to let Ireland and Afghanistan join the elite club of nations which play Test cricket — the long version of the game, as opposed to one-day internationals.

In the Beginning There Were Only Two Test Nations

Originally, in the 19th century, England and Australia were the only teams who played Test matches and that series is still known as The Ashes.

But South Africa, the West Indies, New Zealand, India and Pakistan later joined and they remain the powerhouses of Test cricket.

In 1982 Sri Lanka were added to the roster and 10 years later Zimbabwe, followed in 2000 by Bangladesh.

Mr. Kelly said those three countries had had varying success without challenging the big boys.

"Sri Lanka won a World Cup in 1996 and had a very good batting line-up. They were a good one-day side but are not a good Test team and haven't won a Test series away from home," Mr. Kelly told Sputnik.

"Zimbabwe have done alright. They aren't very good any more but that is because of the economic situation. Any decent Zimbabwean cricketer will invariably have an English granddad and go abroad, like Gary Ballance," Mr. Kelly told Sputnik.

"Bangladesh have come on a lot since the IPL (Indian Premier League) and have their own T20 league. They have come a long way in the last five or six years," Mr. Kelly told Sputnik.

He said there were many reasons why cricket had risen in stature in Ireland.

"It's partly to do with immigration back and forth. There are now lots of Asian players playing cricket in Ireland. Indian-Irish players will be in the team, just like you have an Indian-Irish prime minister, and there has been a growth of the middle class in Ireland. Although working-class games like Gaelic football, hurling and soccer remain popular there has been a rise in cricket and rugby, which are seen as more middle class games," Mr. Kelly told Sputnik.

40 shades of green! Bit of sun on the Test strip at Malahide for historic Ireland v Pakistan Test Match. "Just take the dirty look off it please barber!" pic.twitter.com/58UyvPDc5L

Afghanistan's love of cricket came from its proximity to British India.

When the British Empire left the Indian sub-continent in 1947 it left a legacy of love for cricket.

Kabul Not Safe For Cricket

But because of the threat of terrorism Afghanistan are unlikely to be able to play matches in Kabul or Kandahar any time soon.

Even Pakistan is considered too dangerous for international Test cricket — Pakistan currently play in Dubai — and Afghanistan are expected to play their "home" games in Uttar Pradesh, India.

So now there are 12 Test cricket nations but could there soon be more?

"Possibly the Netherlands, Kenya or Namibia, or even Scotland. They probably won't but they may become Test playing countries," Mr. Kelly told Sputnik.