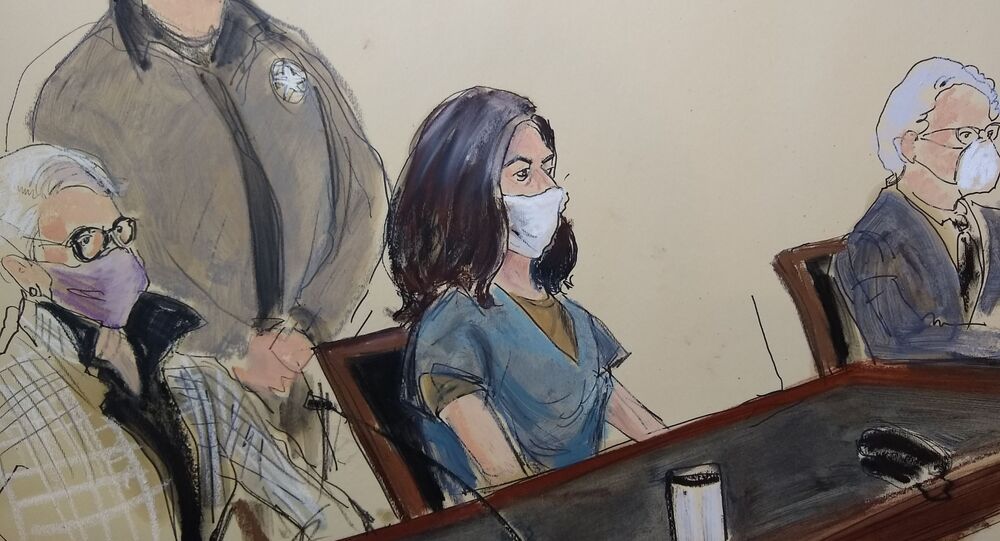 Maxwell, who is often referred to as convicted pedophile Epstein's "madam," is currently awaiting her trial in New York, postponed to late November because of new charges added to the case. The former socialite has pleaded not guilty to charges including sex trafficking of a minor and perjury.

Ghislaine Maxwell taught a British socialite who had dated the UK's Prince Andrew how to perform oral sex, the Daily Mail reported on Monday, citing a new documentary about Jeffrey Epstein's alleged accomplice.

According to the report, Lady Victoria Hervey, once a love interest of the Duke of York and the daughter of the 6th Marquess of Bristol, claims Maxwell "demonstrated certain things to her" at social occasions in the 1990s.

She also reportedly called the decade "debauchery," and claimed that everyone she knew, including herself, had a "wild time" in those days.

According to the outlet, Victoria Hervey participated in the British reality TV show Love Island and was involved in several sex scandals.

Anna Pasternak, a journalist and author who attended Oxford University with Maxwell, is also appearing in the documentary. She claimed that Epstein's former girlfriend "came across as this raunchy extrovert and you got the feeling she would have done anything to please a man."

The new three-hour film Epstein's Shadow: Ghislaine Maxwell will premiere on NBC streaming service Peacock on June 24. The documentary is one of several upcoming movies scrutinizing the story of 59-year-old Maxwell and the late pedophile Epstein.

Among the participants in the documentary is former CIA officer John Kiriakou, who reportedly predicted that Maxwell will end up accepting a plea agreement owing to her and Epstein's connections to "too many important people" when facing court.

Moreover, following Epstein's release from prison in 2009 after getting a plea deal on charges of performing sexual acts on minors, the British socialite sought to "cultivate" a friendship with the Clintons in order to clean up her act and distance herself from her ex-boyfriend, according to the report's review of the documentary.

"[Maxwell] really began focusing on cultivating the Clintons to try and forge her own path as an environmental campaigner through her Epstein-financed nonprofit, Terramar," journalist Barry Levine is quoted as saying. "Ghislaine was trying to legitimize herself, she was trying to move herself away from the Jeffrey Epstein world and this [Terramar] was going to be her way out."

As can be seen on the photos obtained by the outlet, Maxwell was spotted at Chelsea Clinton's wedding in Rhinebeck, New York, in 2010.

"She was very pally with Bill Clinton. Ghislaine and Bill just looked very at ease with each other," Levine added.

© Photo : YouTube/ Westchester Digital Summit
Maxwell Tricked Into Apparently Admitting Epstein's Tapes of Trump, Clintons Do Exist, Book Claims
According to the documentary, people allegedly familiar with the situation claimed that Maxwell will possibly try to portray herself as one of Epstein's victims during the trial. She will "likely" state before the jury that she was "under the influence of this very powerful, wealthy man," according to Kiriakou.

"Epstein had a hold over her psychologically and he abused her as much as he abused those girls," the former CIA agent said while describing Maxwell's lawyers' defense strategy.

According to the documentary, the possibility of Maxwell going on trial has heightened the likelihood that affluent and powerful men she associated with may be mentioned during the proceedings.

"If it goes to trial the tapes are going to have to come out and too many important people don't want that to happen so the Justice Department will offer Ghislaine Maxwell something she can live with," Kiriakou suggested while referring to the alleged Epstein tapes, which are allegedly full of dirt on his influential acquaintances. "It won't be 30 years, it will be 10 or 15 years. It won't be in a maximum security prison, she will go to a low security prison."

Since her arrest last July, Maxwell has been held in detention and has been denied bail five times having been deemed a flight risk. Her lawyers have stated that she has been held in the dreadful Metropolitan Detention Center in Brooklyn, New York, under "uniquely onerous conditions."

The alleged madam is facing an eight-count indictment for allegedly assisting her ex-boyfriend Epstein in sex trafficking and sexual abuse of women nearly two decades ago. She denies the charges and is seeking bail so that she can better prepare for her trial, although her request has been repeatedly rejected.