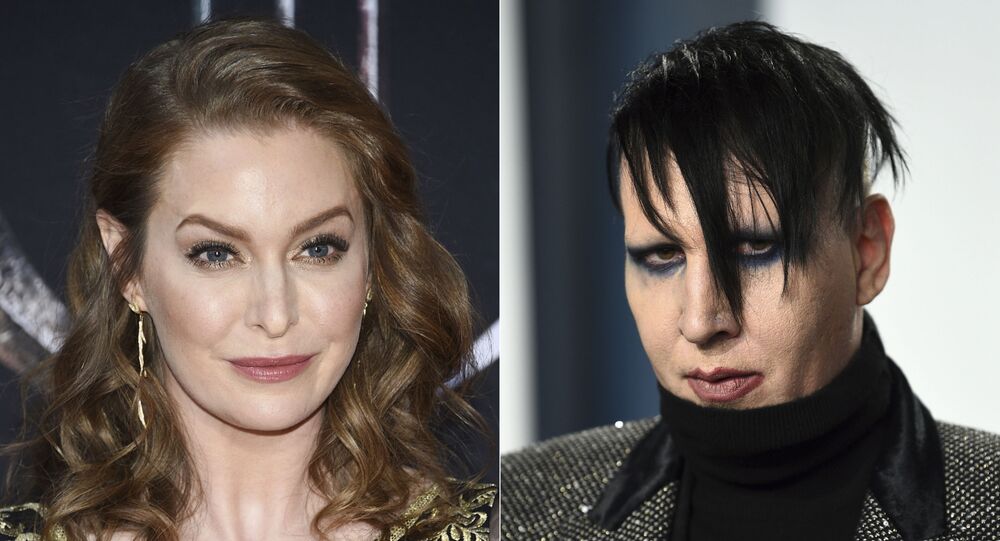 In February, actress Evan Rachel Wood, 33, issued a statement accusing Marilyn Manson of a slew of crimes, including sexual and psychological abuse, extortion, and grooming. Since then, several other women have made similar claims against the 52-year-old Grammy nominee.

Esme Bianco, who played the prostitute Ros in the Game of Thrones series, has filed a lawsuit against Marilyn Manson, alleging physical, sexual, psychological, and emotional harassment and abuse over the course of a relationship that lasted several years, after publicly accusing him of doing so.

The 38-years-old actress claims in her lawsuit, published by Deadline on Friday, that Brian Warner, which is Manson's real name, "used drugs, force, and threats of force to coerce sexual acts from Ms. Bianco on multiple occasions" and "raped Ms. Bianco in or around May 2011."

"Ms. Bianco was threatened and physically beaten," the suit alleges. "Mr. Warner repeatedly told Ms. Bianco that he would come to her room and rape her during the night ...  He attempted to force her to perform sexual acts on camera with another woman who was present throughout the shoot. Perhaps most horrifyingly, Mr. Warner locked Ms. Bianco in the bedroom, tied her to a prayer kneeler, and beat her with a whip that Mr. Warner said was utilized by the Nazis. He also electrocuted her."

The document states that the singer committed these actions against Bianco when the woman was unconscious or could not give her consent. The acts reported include slapping, biting, cutting, and whipping on various parts of the body.

"He also supplied drugs to Ms. Bianco and deprived her of sleep and food in order to weaken her physically and mentally and decrease her ability to refuse him. Mr. Warner committed sexual acts with Ms. Bianco when she was unconscious or otherwise unable to consent," the document reads.

© Sputnik / Vladimir Astapkovich
Admission of Guilt? Marilyn Manson Wrote in Biography He Had Exploited and Humiliated Girls
According to the filing, Manson and Bianco started a consensual sexual relationship in 2009. The two maintained their long-distance relationship until Manson persuaded Bianco to move to Los Angeles and live with him in 2011. Manson is accused of defrauding Bianco by falsely telling her she would star in his upcoming feature film Phantasmagoria, controlling her movements and who she was allowed to see, and verbally abusing her in front of others, according to the lawsuit.

According to the lawsuit, Manson used a mixture of violence and coercion, as well as empty promises of work and threats to her career, to cause her to lose her job and suffer long-term trauma. Bianco is seeking a jury trial and undisclosed compensatory damages.

"It took Ms. Bianco years to understand the extent of Mr. Warner’s physical, sexual, psychological, and emotional abuse," Bianco's lawyers claim in the filing. "Her career suffered due to the deterioration of her mental health caused by Mr. Warner. She deals with complex Post-Traumatic Stress Disorder, anxiety, depression, and panic attacks to this day as a result."

The actress also sued Manson's old manager, Tony Ciulla, claiming that he violated the Trafficking Victims Protection Reauthorization Act when "Manson employed fraud to bring Bianco to the US," and that he served as Bianco's "babysitter" when Manson was not present.

Evan Rachel Wood, who is known for the series Westworld, was the first to publicly accused Manson of violence, saying that for years he "horrifically abused" her, and after all those years she chose to "expose this dangerous man and call out the many industries that have enabled him, before he ruins any more lives."

As US media reported, at least four other women shared their experiences in solidarity, accusing Manson of sexual and psychological abuse, as well as various forms of coercion and intimidation. Manson called the allegations of violence "horrible distortions of reality." He has since disappeared from the public eye after being dropped by his long-term music label and losing some jobs in TV and film.