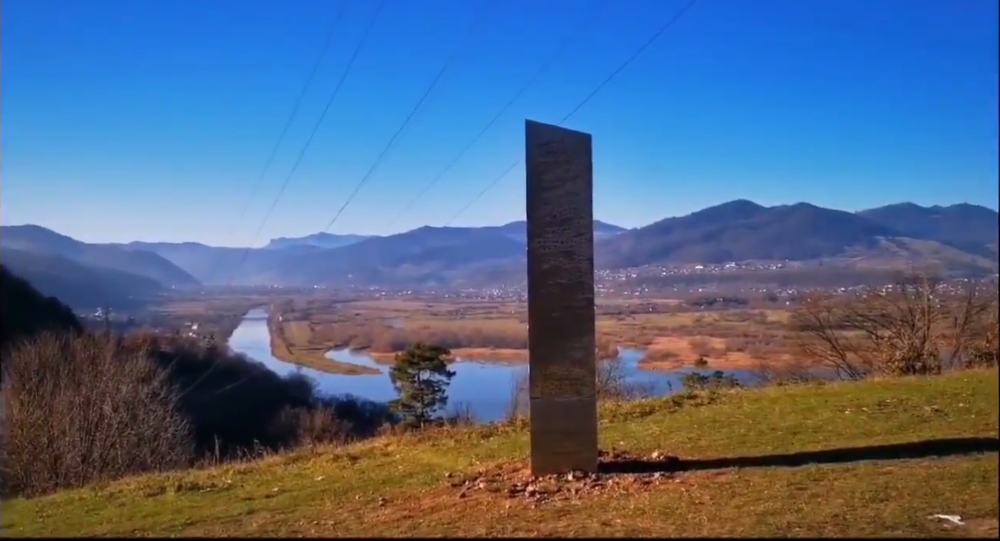 An almost identical metal monolith was discovered in the Utah desert in the US last week, drawing huge attention to a structure of "unknown origin". Although it vanished shortly after, the monolith was quickly compared to Arthur C. Clarke's famous alien structure that helped the evolution of the apes on Earth in his classic 2001: A Space Odyssey.

A shiny triangular metal structure was discovered on the Batca Doamnei Hill in the city of Piatra Neamt in northern Romania last week. The pillar, similar to a monolith from Stanley Kubrick's movie 2001: A Space Odyssey, based on English author Arthur C. Clarke's book, is approximately 4 meters (13ft) tall, the Daily Mail reported Monday.

Reportedly found a short distance from a famous archaeological landmark, the Petrodava Dacian Fortress, built between 1st century BC to 1st century AD, one side of the triangular Romanian monolith faces Mount Ceahlau, known locally as a holy place and one of the most famous mountains in Romania.

Because the #reptilians didn't want to bring us in Romania a steel #monolith like the one in #Utah, we built one 🤷🏻‍♂️👽 #UtahMonolith pic.twitter.com/q0KEShlHI0

Romanian authorities reportedly do not know who is responsible for erecting the structure on top of the hill and have initiated a probe into the matter.

"We have started looking into the strange appearance of the monolith. It is on private property, but we still don't know who the monolith's owner is yet. It is in a protected area on an archaeological site", the Daily Mail quoted Neamt Culture and Heritage official Rocsana Josanu.

So the #Monolith first appeared in #Utah and then disappeared yesterday. Then seemingly instantly appeared on the other side of the globe in less than 24 hours in #Romania ?!?!? pic.twitter.com/MrgG3La5vE

Officials say that government permission is needed to place any object on the hill's area.

"Before installing something there, they needed permission from our institution, one that must then be approved by the Ministry of Culture", Josanu pointed out.

The finding comes after a monolith similar in design, 3.6 meters (12 ft) tall, was discovered earlier among red rocks in the Utah desert in the US by local officials who were reportedly counting bighorn sheep from a helicopter. The video and photos of the unexplained finding sparked theories online, with some suggesting that it might be the work of aliens, as in the Clarke's sci-fi story, though it is more likely an object erected by someone in homage to the 1968 classic work of speculative fiction.

© Photo : Utah Department of Public Safety Aero Bureau
A monolith spotted in the Utah desert by public officials who were counting sheep from a helicopter

Although local authorities tried to conceal the location of the Utah monolith, its coordinates were quickly tracked down and many traveled to the remote place in the desert to take a look at the mysterious object. Conspiracy theories on the origins of the pillar quickly sparked across the internet.

Shortly after, on Friday evening, the monolith disappeared, as state officials claimed it was removed by an "unknown party".

In the book by Clarke and in the subsequent movie by Stanley Kubrick the same looking structures were used by aliens as their tools to discover the world across the universe and to boost the development of intelligent life on the worlds found. The tribe of pre-historic apes approached the monolith, which studied their minds and took control of their actions, as the human predecessors learned to use the tools to kill animals for meat to end their starvation and to fight a rival tribe of apes, awakening the intelligence and the development of modern humans.