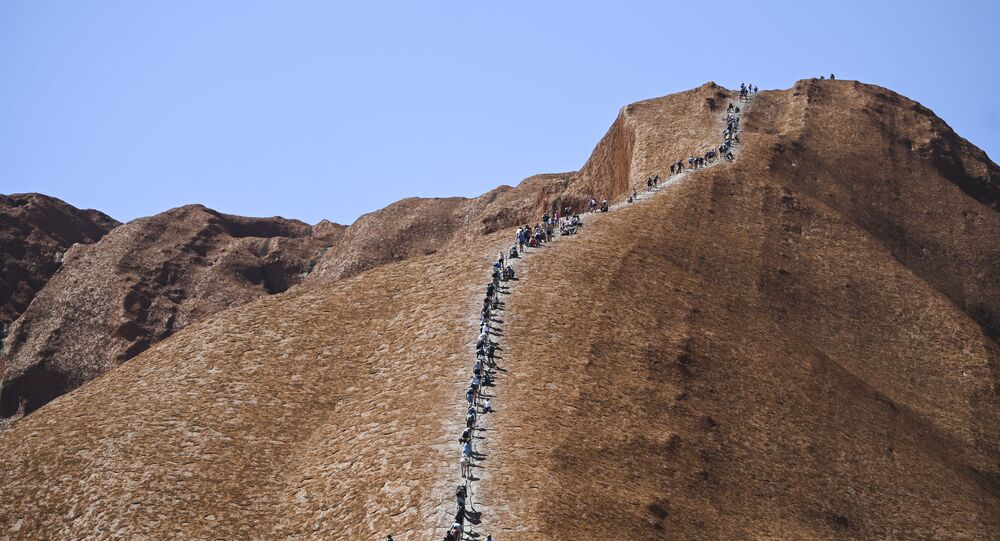 Saturday marked the start of the Australian government’s permanent ban on the climbing of Uluru, the sacred red rock of the Aṉangu. Despite the sandstone monolith’s known cultural importance, hundreds of tourists and other visitors participated in a final climb on Friday.

Australia’s Uluru, also known as Ayers Rock by those outside of the Aboriginal community, may be a UNESCO World Heritage Site, but the 1,142-foot sacred stone drew a particularly large crowd on Friday, as visitors of the sandstone monolith attempted to get in one more climb before the act was permanently banned.

The climbing ban, which was announced back in 2017, was approved unanimously by Uluru-Kata Tjuta National Park board members out of respect for the Aṉangu.

Prior to the ban, a large advisory board was located at the foot of Uluru, which included heartfelt personal safety advisories referencing past climbing-related fatalities and an explanation of the rock’s importance.

“This is our home,” the sign read. “As custodians, we are responsible for your safety and behavior. Too many people do not listen to our message. Too many people have died or been hurt causing great sadness. We worry about you and your family.”

The sign invited people to refuse the temptation to climb and instead walk around the sacred sandstone monolith’s base, as “Uluru is sacred in our culture. It is a place of great knowledge. Under our traditional law climbing is not permitted.”

'Please don't climb' - This is the sign that currently greets visitors to Uluru considering the climb. Pic: @RickHind pic.twitter.com/YpGFkfAIMX

Nevertheless, hundreds of climbers from near and far assembled at Uluru’s base on Friday and ignored the “please don’t climb” plea from the Aṉangu.

"The feeling you get from standing at the top is just indescribable," one tourist who scaled Uluru, but did not want to be identified, told the BBC. "I felt a sense of reverence for the rock afterwards."

At the same time, Rameth Thomas, who is Aṉangu, did not seem to care one bit about the “indescribable” feeling felt by those who chose to knowingly disrespect what is considered to be like a “church” for his people.

"I've been telling them since I was a little boy: 'We don't want you to climb the rock,'" he said to the outlet. "All of our stories are on the rock. People right around the world ... they just come and climb it. They've got no respect."

Stefica Bikes
A new permanent closure sign is installed at Uluru, formerly known as Ayers Rock, the day before a permanent ban on climbing the monolith takes effect following a decades-long fight by indigenous people to close the trek, near Yulara, Australia

As of October 26, however, a new sign has been placed at the bottom of the monolith to accompany the climbing ban.

‘Is That Normal?!’: Shark Shows Off Belly During Aussie Charter Tour