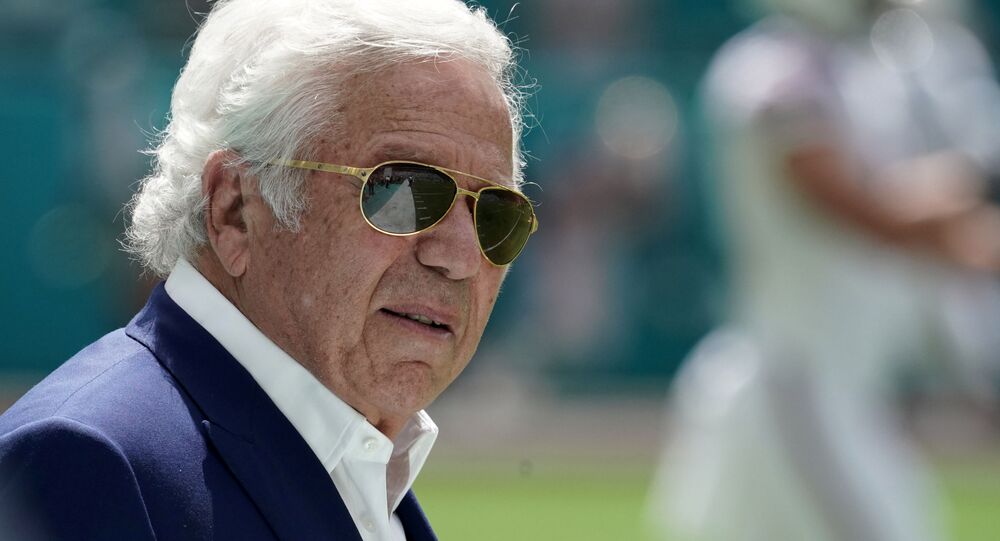 In February 2019, US billionaire Robert Kraft, owner of the top-ranked American football team, the New England Patriots, was charged with soliciting prostitution following a month-long investigation by Jupiter county police in Florida into sex trafficking that included installing hidden cameras at a massage parlor visited by the investor.

Two misdemeanor charges for “soliciting another to commit prostitution” against New England Patriots’ owner, Robert Kraft, were dropped on Thursday after a Florida court of appeal blocked the use of video evidence provided by the Jupiter county police department.

“Without these videos we cannot move forward with our prosecution,” Palm Beach County State Attorney Dave Aronberg said during a press conference, adding that he was “disappointed” by the court's decision. “It is not a lack of will that caused us to drop the charges in the spa cases. But our hands were tied”.

On 19 August, the Florida 4th District Court of Appeal ruled that a secretly-recorded video that allegedly shows the billionaire investor engaging and paying for sex acts with women at a massage parlor could not be used against Kraft and other suspects in the soliciting prostitution case.

On Monday, the office of Florida Attorney General Ashley Moody announced their decision not to seek another appeal of the solicitation case.

“We were disappointed by the Fourth District's decision,” Kylie Mason, the attorney general’s press secretary said in a statement to CNN.

On the same day, Kraft’s legal team filed a motion requesting that the recordings be destroyed. The lawyers also said that their client would be ready to pay the state’s cost if anyone challenges a file destruction order, according to Fox News.

On 22 February 2019, Robert Kraft, 79, received two misdemeanor charges for “soliciting another to commit prostitution” with links to an alleged sex trafficking ring in Jupiter, Florida. Among 25 suspects, Kraft was accused of forcing women to perform sex acts at a local massage parlor. Prosecutors provided the court with video recordings from cameras installed secretly at the spa by police.

In March of 2019, Kraft’s attorneys took legal action against the use of the recordings as evidence in the case. In May 2019, the court ruled the videos could be used. Prosecutors challenged the court’s ruling to suppress video evidence, filing an appeal in October of that year.

In March 2019, the Patriots’ owner issued a statement apologizing to the public and refuting accusations against him.

“I am truly sorry. I know I have hurt and disappointed my family, my close friends, my co-workers, our fans and many others who rightfully hold me to a higher standard,” Kraft said. “Throughout my life, I have always tried to do the right thing. The last thing I would ever want to do is disrespect another human being. I have extraordinary respect for women.. I expect to be judged not by my words, but by my actions. And through those actions, I hope to regain your confidence and respect.”

Trump on Colin Kaepernick’s Potential Return to NFL: If He Deserves it, He Should Play