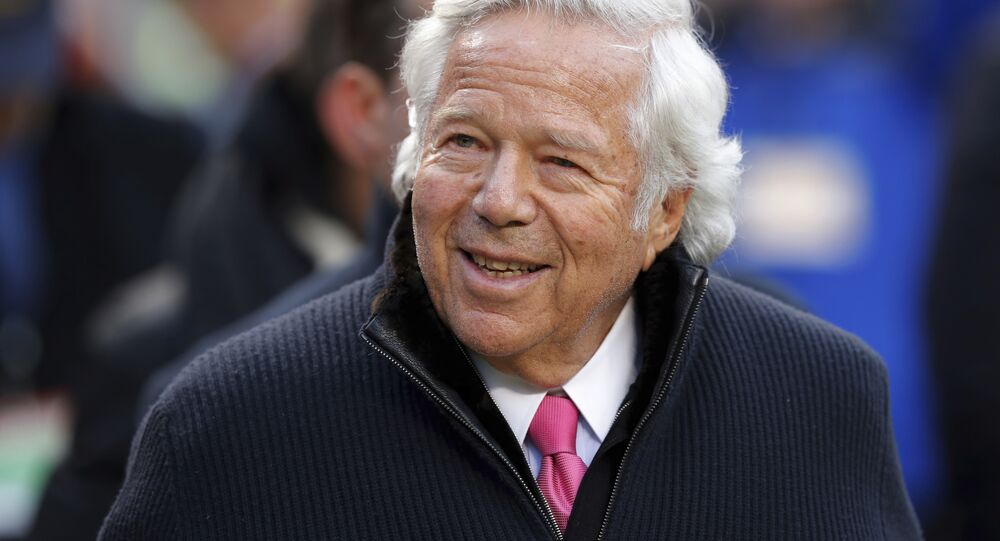 New England Patriots owner Robert Kraft was charged this week with two counts of soliciting someone to commit prostitution in connection to a months-long investigation by Florida police into an international human trafficking ring.

Florida's Jupiter Police Department made the Friday announcement during a news conference in which they discussed their ongoing investigation into several massage parlours across the Sunshine State that were offering sex acts to clients.

Kraft is just one of 25 individuals facing charges in connection to the undercover investigation that zeroed in on the Orchids of Asia Day Spa in Jupiter, Florida. This particular spa had been surveilled by law enforcement officials since November 2018.

​Jupiter Police Chief Daniel Kerr told reporters at the conference that Kraft's charges relate specifically to "two different visits" that the Massachusetts native made to the spa.

"He is being charged with the same offense as the others, and that is soliciting another to commit prostitution," Kerr said. "We're as equally stunned as anyone else."

Officials have indicated that they are also in possession of video recordings that show charged individuals, including Kraft, partaking in sexual exchanges at the establishment. Police noted that the average fees for sexual services ranged between $59 for a half-hour to $79 for a full hour.

Police have not yet indicated how much money or time in total Kraft himself spent at the parlour, or what services he requested. However, they did communicate that officials are in possession of video showing Kraft being driven to the site. Officials remarked that Kraft appeared to be a "regular."

Law enforcement officials are presently in the process of issuing an arrest warrant in the case. Kristin Rightler, a spokesperson for the Jupiter police, told CNN that "charges have been filed, but [Kraft] has not been arrested."

Following the news, Kraft issued a statement on the charges through a spokesperson. "We categorically deny that Mr. Kraft engaged in any illegal activity. Because it is a judicial matter, we will not be commenting further," it reads.

CBS Sports reported that Kraft was in Palm Beach on Saturday for a fundraiser at the Dana-Farber Cancer Institute, and that he left for Charlotte, North Carolina, on Sunday to attend the NBA All-Star Game.

A sting operation earlier this week resulted in the arrests of four women linked to the Orchids spa, which was described as a "rub and tug" establishment on online forums, police said. Those individuals were identified as Hua Zhang, Lei Wang, Ruimei Li and Lixia Zhu.

​The Orchids of Asia Day Spa was among 10 businesses that were shuttered in the Orlando area, Palm Beach County and the Treasure Coast. Detectives involved in the case have noted that many of the women working at those establishments, who were from China, lived at the business and were not permitted to leave.

The Treasure Coast Palm reported that investigators believe the women at the spas were supplied by human traffickers with ties to China and New York. An estimated 300 arrest warrants were issued in connection to all 10 spas.

'Nothing Like Live Television!' WATCH NFL Reporter Hit by Ball Ahead of Match