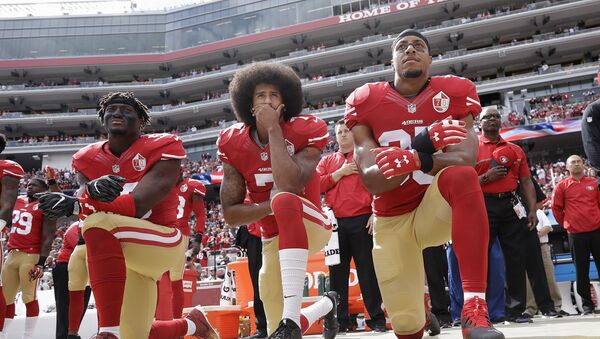 © AP Photo / Marcio Jose Sanchez, File
Subscribe
International
India
Africa
Colin Kaepernick, who leapt into the spotlight by taking a knee during the national anthem at a pre-season game to protest against racial injustice and police brutality in 2016, got sidelined and filed a collusion claim against the NFL in 2017. It was announced that the parties had agreed to settlement terms, including confidentiality provisions.

The announcement about the settlement between Colin Kaepernick and the NFL over his filed grievance, alleging that the league and teams colluded to leave him sidelined, has prompted heated debates on social networks in the US media. While some celebrated it as a victory over “oppressors” acting against a man who kneeled in protest against racism, others slammed Kaepernick for what they called a “sellout”.

Ex-NFL star Larry Johnson was among those who took the news rather bitterly, saying the undisclosed deal with the NFL he signed was "corrupted and diluted his message”. In a comment to TMZ Sports, he accused Kapernick of betraying those following him over taking money from the “oppressor”.

"If your backdrop is going to be the African American civil rights presence that it brought from the '60s and you're going to use that for your own causes, you don't sell out…You don't turn your message into a Nike hoodie", he said, referring to Kaepernick’s contract with the manufacturer.

The former athlete blamed him for giving the league a way-out for money.

Many netizens were left disappointed and livid over Kaepernick’s move as well.

This is complicated and I'm conflicted. Let's give it some time? #Kaepernick #nfl pic.twitter.com/Yg8DxxGv0G

Honestly, I believe that Kaepernick is a HUGE sellout. You should stick up for your purpose and prove that this is a racial issue (WHICH IT IS). Not take the money and run. Your a face of racial injustice, should’ve acted like it https://t.co/yBBB3Ss4Ya

Colin Kaepernick mustnhave made a hell of a lot of money under the confidentiality agreement that he just signed…sellout?

Some referred to him as “Judas”.

@JohnKincade I think Kaepernick sold out the NFLPA, which Tedy Bruschi said as much without calling him a sellout like same. By not continuing the case and exposing more evidience, the NFL owners can continue business as usual. Like Judas, he took his 30 pieces of silver and left

Others pointed out that he had employment opportunities but passed on them.

LOL don't ever compare Kaepernick to those men. Kaepernick is a sellout and was only it for the money. He's had opportunities to play fotball again but passed on them.

However, many applauded the move and defended Kaepernick from sell-out accusations.

If you say Colin Kaepernick is a sellout you're either a fool or a racist. Without a gag order the NFL never would've settled which would allow racist trash to say Keap wasn't good enough to play. This settlement proves he was. Much of that money will go to worthy causes! ❤️🏈

Those who are calling Colin Kaepernick a sellout don't know what the fuck sellout actually means. Sit down!

​Others just gave way to their happiness with numerous gifs.

How Kaepernick walking into the bank after settling his collusion case with NFL pic.twitter.com/Gk0G5rsLUH

How Colin Kaepernick left after reaching a settlement with the NFL: pic.twitter.com/wneN9tJuOs

Kaepernick has been sidelined from playing since March 2017, when he opted out of his contract with the San Francisco 49ers. Despite a reputation as a talentedserviceable quarterback, no NFL team has signed him since he took a knee. In October 2017, the quarterback sued the league accusing them and its members of collusion to deprive him of employment. However, on Friday, Kaepernick's lawyer, Mark Geragos, announced that the parties came to a settlement agreement with a gag order, meaning, information about its terms, including possible payment, cannot be made public.