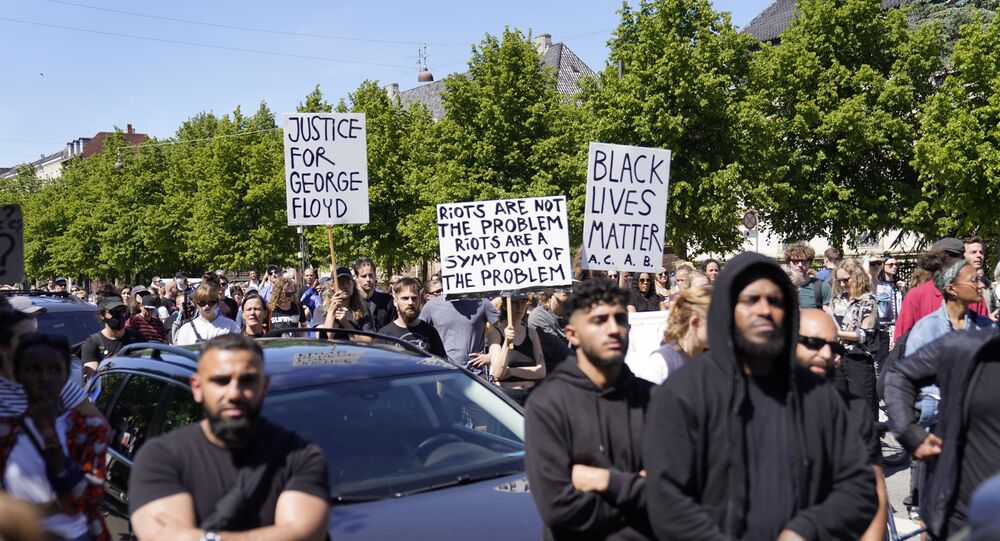 The death of black man George Floyd at the hands of US police triggered protests in the US that quickly turned violent, involving clashes with police officers, cars set on fire, and even looting. Since then, similar demonstrations, albeit peaceful, have been held in Europe.

Around 2,000 people have gathered on the streets of Copenhagen to protest against the killing of African American George Floyd by US police.

The demonstration in Copenhagen started outside the US Embassy in Østerbro and ended at Christiansborg, the seat of the Danish parliament. The demonstrators held signs saying “Justice for George Floyd”.

Thousands of people on the streets at the BLM-protest in Copenhagen #BlackLivesMatter #protests2020 pic.twitter.com/oqWiF4yaAz

Today's march outside the US embassy in Copenhagen, organized by #BlackLivesMatter Denmark.

People are saying this may be the biggest turnout to a protest in Denmark since the 2009 climate conference. pic.twitter.com/bgWVo71wAS

“I believe it's unfair that people around the world are treated so poorly, regardless of their skin colour. There is also racism in Denmark. After all, we are world citizens, so it's important to make it clear. I think what has happened is violent and unethical”, protester Lea Rejmers told Danish Radio.

America, the world is watching! And Denmark is not impressed. #BlackLivesMatter #GeorgeFloydProtests pic.twitter.com/3rzYa7vkS8

​The death of George Floyd earlier stirred demonstrations in the city of Minneapolis, Minnesota that later turned violent and culminated in looting, pillaging, and acts of vandalism. Cars were torched and businesses were damaged. Since then, similar demonstrations have mushroomed across the country, including near the White House itself, spurring the police into using tear gas.

A US Embassy spokesperson in Denmark told TV2: “Our Justice Department has made it clear that responsibility for [George Floyd's] death is being addressed through the legal system, both at the state and federal levels. We will always stand by the rights for all people to peacefully demonstrate and to have their voices heard, but we will also oppose anyone who exploits this tragedy to loot, rob, attack, and threaten”.

The protests flared up following a video of a police officer pressing his knee against George Floyd's neck going viral. Floyd repeatedly told the officers he couldn't breathe only to become unresponsive and later die at a local hospital. Since then four police officers involved have been sacked, and one charged with murder and manslaughter.

Demonstrations have also been held in other European capitals such as Berlin and London, also peaceful unlike the US version.