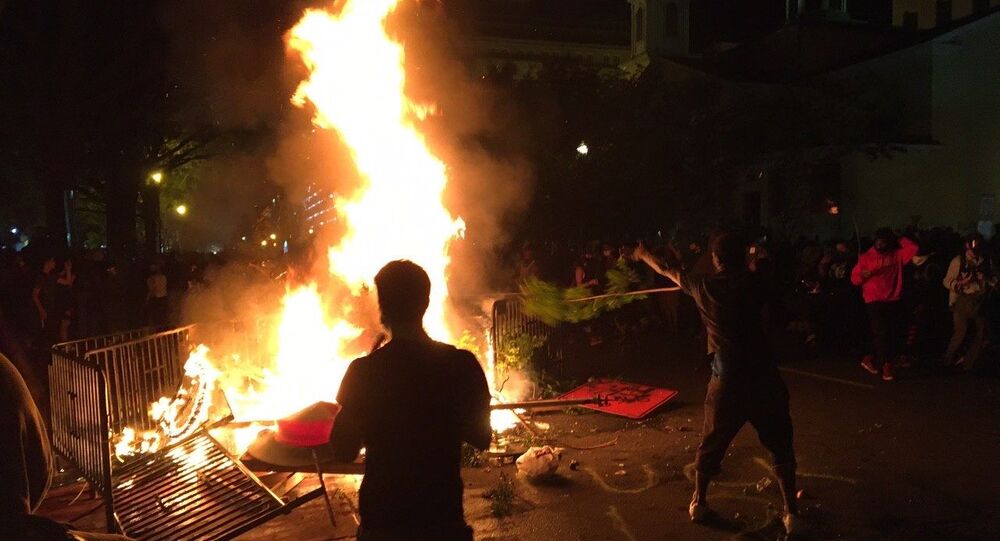 The Sunday evening protest in the US capital appears to be the largest George Floyd gathering in DC. The protesters have accumulated near the White House in front of a fence that separates them from a police cordon.

Police in Washington DC are trying to prevent protesters from getting to the White House again, with sporadic clashes between officers and demonstrators reported.

UPDATE: Protest activity is now completely concentrated on Lafayette Square and the 1600 block of H. 90 minutes until curfew. No sign of the guard on city streets, only next to Park PD @nbcwashington @erika_news pic.twitter.com/twFyoBEvie

Several people were injured in Washington DC when police pushed back protesters who threw water bottles and firecrackers at law enforcement officers. Police were trying to get protesters away from the White House as several fires were already burning along the fence that separated demonstrators from the police cordon.

Fires were set up in front of the White House just several minutes to curfew: the historic St. John's Episcopal Church, which was built in 1816, was also apparently set on fire.

Cars being set on fire in downtown DC. About two blocks from the White House. @CBSNews pic.twitter.com/id9j662MkU

Earlier in the day, demonstrators were heard chanting "let us march" as they were moving in towards the presidential residence.

The street is blocked by police at H and 15th, protestors are chanting “let us march”
Flash bangs continue to go off. #GeorgeFloydProtests #protests2020 @wusa9 pic.twitter.com/8pc9D5pIaG

Scene near Opaline near White House. We hear explosions (tear gas?). At least one protester was stomping on top the police car before law enforcement arrived. @wusa9 #GeorgeFloydProtests pic.twitter.com/z88VMTOYh2

As it became dark, someone was heard playing the saxophone.

Thousands in front of The White House protesting peacefully chanting:

Hear the saxophone? Protesting can be joyous too. A few young people described it as a “celebration of life.” pic.twitter.com/kXrFo8Cn0j

A curfew was imposed in DC and will come into force starting at 11:00 pm local time (03:00 GMT on Sunday). Mayor Bowser has also activated the DC National Guard to support the Metropolitan Police Department.

Washington has seen anti-police protests over George Floyd's death for the third day in a row. Hundreds of people were seen in the centre of DC on Sunday, most of them concentrated in Lafayette Square. Lafayette Square, a park located adjacent to the presidential residence, has been closed to the public, with representatives of various law-enforcement agencies visible on the premises on Sunday.