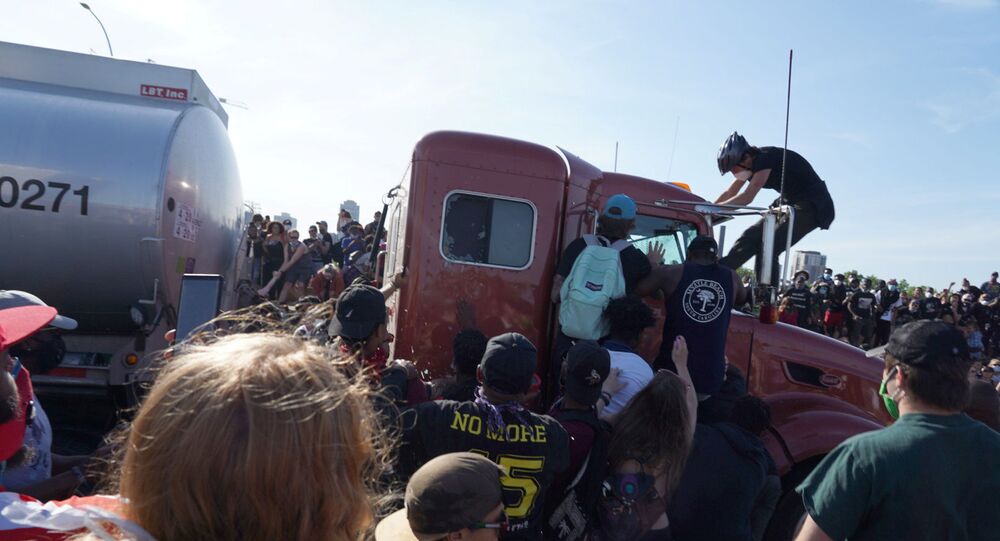 Tanker Truck Drives Into Crowd of Protesters in Minneapolis - Videos

Minneapolis citizens have been demonstrating non-stop following the death of black resident George Floyd. The protests turned violent at some point, with rioters engaging in clashes with police officers, smashing and setting vehicles on fire, and even stealing from local businesses.

A tanker truck has plowed into a crowd of protesters on a Minneapolis highway, footage from a helicopter shows.

Other footage moments later shows the truck getting swarmed by protesters after it slowed down. They are seen trying to pull the driver out of the cab, but it is not clear what happens to him next.

The Minnesota Department of Public Safety later tweeted the driver was arrested, adding that, apparently, no protester was injured in the incident.

Very disturbing actions by a truck driver on I-35W, inciting a crowd of peaceful demonstrators. The truck driver was injured & taken to a hospital with non-life threatening injuries. He is under arrest. It doesn’t appear any protesters were hit by the truck. #MACCMN

According to FOX9, medics rushed to the scene to help those who might have been hurt. It added it was not clear how the truck could have made it onto the highway, as it was closed down by the authorities at 5 p.m.

Demonstrations in connection with the death of George Floyd continued in Minneapolis for a sixth straight day. The National Guard later used tear gas and rubber bullets to disperse protesters on Saturday.