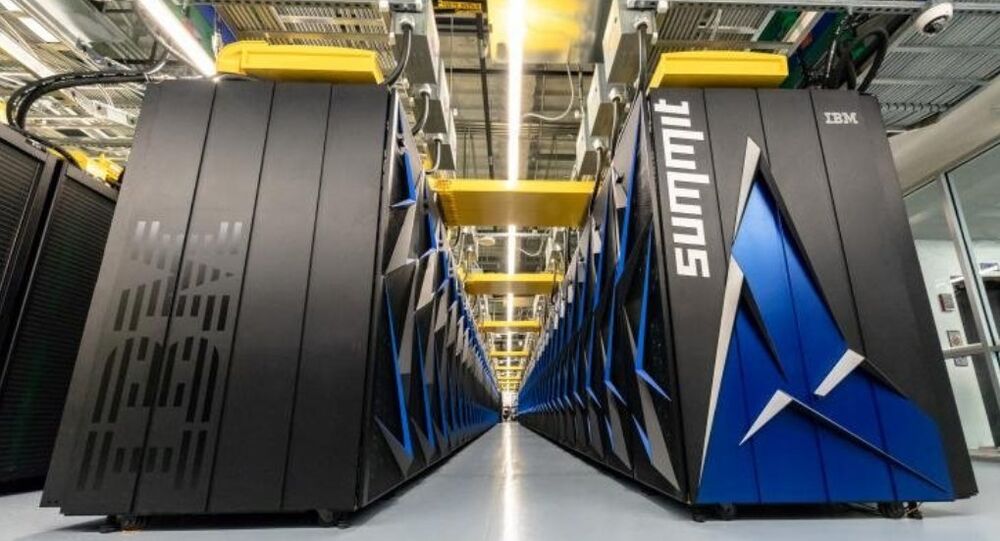 After switching on the 340-ton Summit, the US has clawed back its title to producing the world’s fastest supercomputer, an honorific held by China for the past five years.

Although the brag has come to be acknowledged as merely symbolic, the location of the world's fastest supercomputer has long been a topic of national pride among a certain kind of politically-motivated tech nerd, as well as a jumping-off point for dark predictions of machine hegemony through the use or abuse of artificial intelligence and surveillance-based data gathering.

© CC0 / Pixabay
Google Has Dropped Out for Now, But Lethal AI ‘Inevitable’

Housed in Tennessee hill country at the famed Oak Ridge Laboratory — where the first US atomic bombs were designed — Summit, technically referred to as OLCF-4, can crunch numbers at a rate of 200 petaflops (200 quadrillion computations per second), a new record, according to a Friday announcement from the US Department of Energy (DoE).

As helpfully defined by the New York Times, these kind of computing speeds would require a really smart — and long-lived — human performing one calculation each second to stay alive for over 6.3 billion years to do what Summit is capable of doing in a single second.

Of course the champion's reign is likely to be short-lived, as China is host to the largest number of supercomputers in the world and Beijing, Tokyo and Europe are currently rushing even faster machines clocking exaflop (1,000 petaflop) speeds into development.

Reportedly costing some $200 million to build, Summit and other supercomputers serve to push the boundaries of computing, notably including the development of artificial intelligence and the feasibility of manipulating enormous datasets, according to Nytimes.com.

Evangelists of cutting-edge tech note that medicine, materials development — including weapon and spacecraft design — energy technology, and many other branches of science gain from the use of machines like Summit.

"These are big data and artificial intelligence machines," according to IBM Research spokesman John Kelly, who added, "that's where the future lies," cited by Nytimes.com.

Summit consists of multiple rows of large black boxes housed in a 9,250 square-foot space and weighing in at some 340 tons overall. Powered by 9,216 IBM-built central-processing chips and an astonishing 27,648 Nvidia graphics processors, the disparate elements of the machine are bound together using an estimated 185 miles of fiber-optic cable.

It's not cheap to feed it and keep it functioning, as Summit reportedly eats as much electricity per day as 8,100 US-style homes and keeping the feverishly-thinking machine cool takes pumping some 4,000 gallons of water a minute though the network.

Summit is said to be over twice as fast as China's top-spot precursor Sunway TaihuLight, housed in the country's National Supercomputing Center in Wuxi.