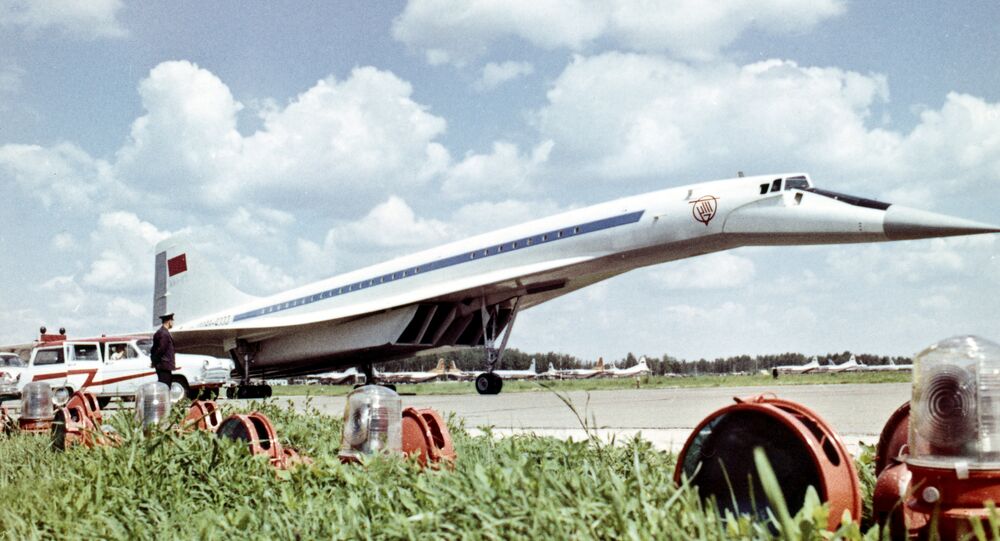 Past and Future of Supersonic Passenger Jets

Russia is planning to build its first (in modern history) supersonic business jet, which will be able to carry up to 50 passengers onboard, in 7-8 years. Sputnik examines previous experiences in building such planes, and prospects for the future.

After the start of the rapid development of turbojet aviation and the first successful attempts to reach the speed of sound, several countries switched their attention towards creating a supersonic passenger jet airliner for long distance flights without refueling stops.

The first two countries to start developing such aircraft were France and the UK, who later united their efforts, creating the Concorde supersonic jet. However, its rival from the USSR, the Tu-144, managed beat it, reaching Mach 1 (speed of sound) first. The US project for such an aircraft, the Boeing 2707, was canceled 2 years after start, due to a lack of funding.

Commercial use of the first supersonic passenger jets

Despite being first to liftoff and reach the speed of sound, and even Mach 2, the Tu-144 carrier in commercial flights was not very successful. Starting its flights in 1975 (1977 first passenger flight), the Soviet government wrapped up the project shortly after, in 1978. The Soviet plane’s Franco-British counterpart, however, lasted far longer, with 20 jets being built (5 of them sold for a symbolic price due to lack of demand and extremely high price), they spent in total over 240,000 hours in the air and were decommissioned in 2003.

However, neither of them was commercially profitable. The costs of both development and construction of each unit were enormous. The costs of maintaining them fit for operation and flightworthy were also higher than experts anticipated, not to mention the fact that they could carry fewer passengers due to constructional restrictions, thus wasting more fuel per passenger than normal jets. And if in Europe and the US (where Concordes often flew) there were plenty of wealthy businessmen who valued their time and were ready to pay more to cross the Atlantic ocean faster, there were none in the USSR, thus rendering the Tu-144 as a self-sustaining project  impossible. But even European and American airlines could not keep Concordes afloat financially, especially after the 1973 oil crisis occurred. The only Concorde flights that remained profitable were charter.

As technological progress moves forward, new solutions to old problems may be found, reviving the old dreams of passenger jets flying at Mach 2 speeds and over. Right now a joint Russian-EU project RUMBLE (Regulation and Norm for Low Supersonic Boom Levels) is tasked with solving another problem that faced both Concorde and Tu-144 – loud claps (which sound more like explosions) that supersonic jets produce when they reach Mach 1, and which prevented Concordes from flying to the US for almost half a year (a whole year for New York).

There are also other technological problems that hinder the economic attractiveness of such projects – for example, Concorde (Tu-144 had less strict requirements) needed special take off strips, longer than regular ones, which limited both the direction where the jets could fly and the number of landing options in case of emergency or bad weather. Moreover, use of aluminum alloys for fuselage limited their maximum speed to Mach 2, thus making them less effective.

The use of composite materials, the newest developments in aviation and limiting the maximum number of passengers as well as the overall size of new supersonic jets may be their salvation. In this regard, the decision to construct a new Russian jet capable of transporting 50 passengers can make it perfectly suitable for charter flights, which have already proven to be profitable in the past.