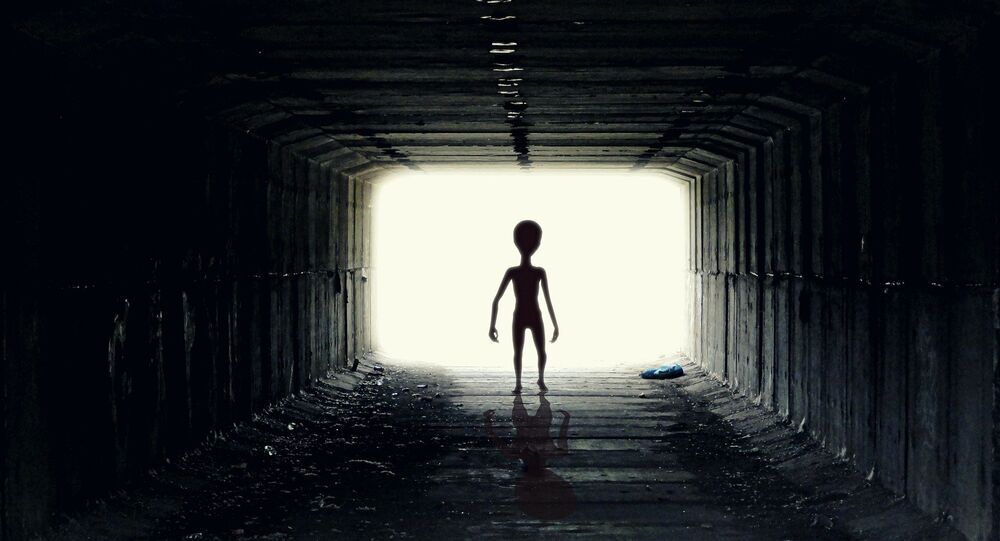 Footage has emerged of what leading UFO researchers believe to be an alien "mothership" – the mammoth craft was spotted on NASA's live feed of the space region adjacent to the International Space Station (ISS).

In the clip, a hazy object swims into view in the background of the ISS — while seemingly a mere line of burning orange orbs initially, quickly the shape of what appears to be a spacefaring vessel gains contour and colour.

However, almost as soon as the unexplained entity gains definition, it melts back into the infinite darkness of space.

The clip itself, the Cousins duo said, is sped up by 900 percent — the actual event lasted over nine minutes.

The pair enlisted the expertise of a UFO aficionado to shed some light on what the apparent craft — which they claimed was "tracking" the station — might actually be.

"First, when I was looking at it, I don't know exactly what I was looking at, but as the video progresses and you start to see things begin to move… you see these orange dots around it, and one in particular is above it, almost as if the light is going to the ISS. At the end of it, entire thing almost shrinks up a little bit. It could be a giant mothership, with those small orange balls being the Earth excursion ships that are always visiting us," the expert said.

He went on to explain the "discs" typically seen by humans on Earth are in fact "little scout ships" released by motherships such as the one depicted in the video.

The video attracted over 40,000 views in a mere two days following its upload date (July 17), with many viewers theorizing in the comments section as to what the incongruity could be.

One was unequivocal and resolute — the sight was an "interstellar mothership" keeping an eye on NASA's activities. They went on to say NASA had lied about aliens ever since their first encounter with a UFO.

"It's pretty obvious we're either a protected planet like a nature reserve or under the protection or rule of another alien race. People wonder how come so many different craft come here. It's like the aliens are not allowed to say 'hello.' Why? Because we have been ruled from day one and still are. Pretty simple logic. Other aliens probably visit us to look, but have an agreement to not contact us, hence crop circles, graffiti? They probably say, 'poor humans being slaves I wish we could tell them!' But it's much similar to the tribe that lives in the Andaman Islands, they have no contact with the rest of the world, they have no idea what's out there. Our governments won't let us say hello, and that's on Earth, so people don't be shocked that they are here but not allowed to speak to us, it's like the Earth is being run by Kim Jong-il," speculated user MrSonicseeds.

​However, some were more circumspect, if not outright cynical, suggesting the footage in fact, depicted a storm in the Earth's upper atmosphere.

Strange sights near the ISS are a common phenomenon. According to the channel chiefs, they have documented a panoply of similar, mysterious anomalies on many of the hundreds of occasions they have tuned in to the feeds — nonetheless, despite the apparent regularity of these incidents, NASA and other space agencies operating out of the ISS almost invariably refuse to address ufologists' claims directly, instead merely denying they have so far encountered aliens, or uncovered evidence of otherworldly visitations.

Footage of a glowing light hovering over the Station (ISS) ignited fears aliens were monitoring Earth.

NASA astronaut Scott Kelly and his ESA colleague Tim Peake jocularly announce they were "attacked" by aliens during their ISS mission.

Some commentators believed it may be a UFO attack — still others an orbital weapon of the kind frequently boasted of by North Korea.

ISS cameras captured an amazing scene — what appeared to be a large fireball streaking through space. UFO enthusiasts were convinced it was an alien craft, skeptics countered the fireball was simply a meteor entering Earth's atmosphere.

NASA sparked controversy after cutting off live video from the ISS after cameras spotted a bizarre unidentified flying object approaching the Earth.

UFO hunters spotted the mystery cube and uploaded it to the web, leading many to speculate that it was an unidentified flying object that latched onto the orbit of the solar system.

The footage was apparently missing from a subsequent NASA upload, leading some ufologists to suggest the agency deliberately edited the footage.

Strange lights were caught passing by the ISS, leading UFO expert Scott Waring to declare the footage proof aliens are monitoring the station.

A video grab from the live feed, depicting a small, white orb, was posted by popular YouTube ufologist Streetcap1.

"Unidentified object is brighter on the left side due to the light from the Sun, so not Lens Flare. NASA cut the camera feed so quickly even though this was very distant, but I still managed to get a couple of frames to enlarge," the video description read.

Skeptics suggested it was instead an "unidentified fluffy object" — a mere speck of dust on the ISS' camera lens.

A mysterious object again appeared on the live feed.

Extraterrestrial enthusiast John Craddick of Wolverhampton, England, said the object appeared "really small" at first, but then grew bigger over a period of 25 seconds, before NASA cut the feed.