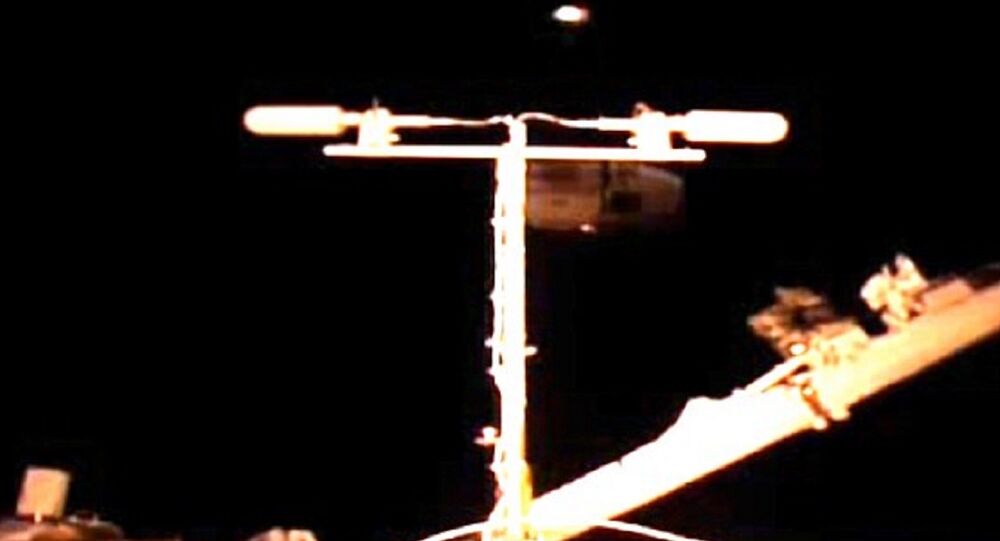 UFO enthusiasts are over the moon, after strange lights were caught on camera passing by the International Space Station.

The fascinating footage has lead UFO expert Scott Waring to declare that the lights are proof that aliens are monitoring the International Space Station (ISS).

“The first UFO is smaller… which tells me it's farther away than the second larger UFO,” he told the Daily Mail.

© Flickr / ⣫⣤⣇⣤
UFO Hunter Captures Footage of ‘Alien Mothership’ Whizzing Over London (VIDEO)
The lights are seen to vividly zoom past the Progress capsule of the ISS. Instead of continuing off camera, however, the lights disappear, leading some overheated commentators to speculate that NASA edited the footage in an attempted cover-up.

“It almost looks like a giant spaceship is passing by but the rest of it is being blocked by some kind of invisible wall perhaps using some kind of software,” one UFO hunter declaimed.

“Something is blocking that pic, to the left and top! NASA don't want you to see!” another user expostulated.

Claims that UFOs are monitoring the ISS are not new, and are usually accompanied by assertions that NASA systematically shuts off their feed anytime abnormal activity occurs.

Streetcap1
NASA Under Fire After Cutting ISS Stream Video Allegedly Showing UFO
In April, NASA commented on the theories for the first time.

"The station regularly passes out of range of the Tracking and Relay Data Satellites used to send and receive video, voice and telemetry from the station,” NASA spokesperson Tabatha Thompson, told ValueWalk.co.uk. “For video, whenever we lose signal video comes down on our higher bandwidth, called KU. The cameras will show a blue screen indicating no signal or a preset video slate, depending on where you are watching the feed.”

When asked if NASA ever shuts off the feed, she replied “No.”

As far as strange lights being spotted in the feed, she suggested that they are reflections from station windows.

"Reflections from station windows, the spacecraft structure itself or lights from Earth commonly appear as artifacts in photos and videos from the orbiting laboratory.”

Skeptics do not buy the explanation, and continue to closely monitor the ISS video stream, as sightings continue.