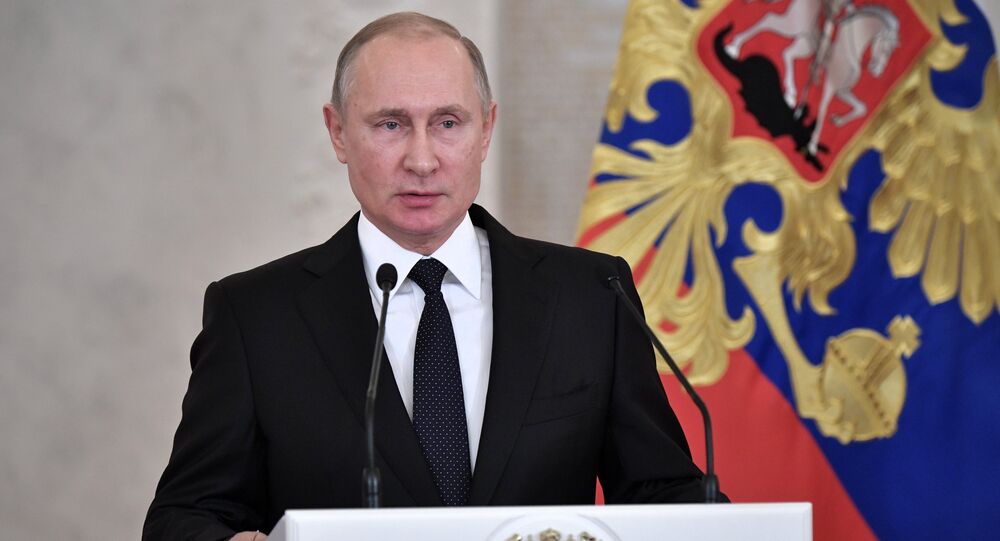 Russian President Vladimir Putin described the imposition of restrictions on Russia as a deadlock solution, which is likely to lead to losses for those who introduced them.

In his speech at the meeting of the Russian Union of Industrialists and Entrepreneurs, Putin expressed hope that the West would soon "get bored with sanctions policy" and the relations with Russia would normalize.

The president added that "the policy of artificially imposed restrictions in international business relations is a dead-end road that leads everyone, including the initiators of such a policy, to missed profits and direct losses."

© Sputnik / Vitaliy Belousov
US Sanctions Against Russian Businesses Unable to Divide Russia - LUKoil CEO
Putin stressed that colleagues of Russian entrepreneurs from other countries "share this point of view."

The president also mentioned his recent meeting with representatives of the French business, adding that he discussed its results on Friday with French President Emmanuel Macron.

In January, the US published the so-called "Kremlin report," which comprised 114 Russian politicians, including the Russian presidential administration and members of the government, and 96 business people. The inclusion in the list does not mean being targeted by sanctions by default, but implies that restrictive measures can be introduced in the future. Commenting on the release of the report, President Putin called it an "unfriendly step" by the US administration, which harms Moscow-Washington relations. In the wake of the publication, the Association of European Businesses (AEB) warned that the US Treasury’s "Kremlin Report" can affect the interests of European investors and European companies doing business in Russia. The "Kremlin Report" was drafted in accordance with the law called Countering America's Adversaries Through Sanction Act, signed by the US President Donald Trump in August.

© Sputnik / Vladimir Astapkovich
'Vain Effort': US' Kremlin Report by the Eyes of International Observers
The United States, the EU, and some other nations have imposed several rounds of sanctions targeting Russian individuals and entities, as well as key sectors of the economy, over Moscow's alleged meddling in the Ukrainian conflict that erupted in 2014 following the coup in the country.

The latest round of sanctions slapped on Russia in August 2017 targeted Russia's defense, intelligence, mining, shipping and railway industries and restricted dealings with Russian banks and energy companies. Russian Foreign Minister Sergei Lavrov called the law "outrageous" and stressed that new sanctions against Russia is a "shameless" attempt of the United States to promote its economic interests in Europe. Germany's top diplomat Sigmar Gabriel also criticized anti-Russian sanctions, as according to the minister, they can lead to dire consequences for energy supplies in Germany since sanctions affect Russian pipelines.