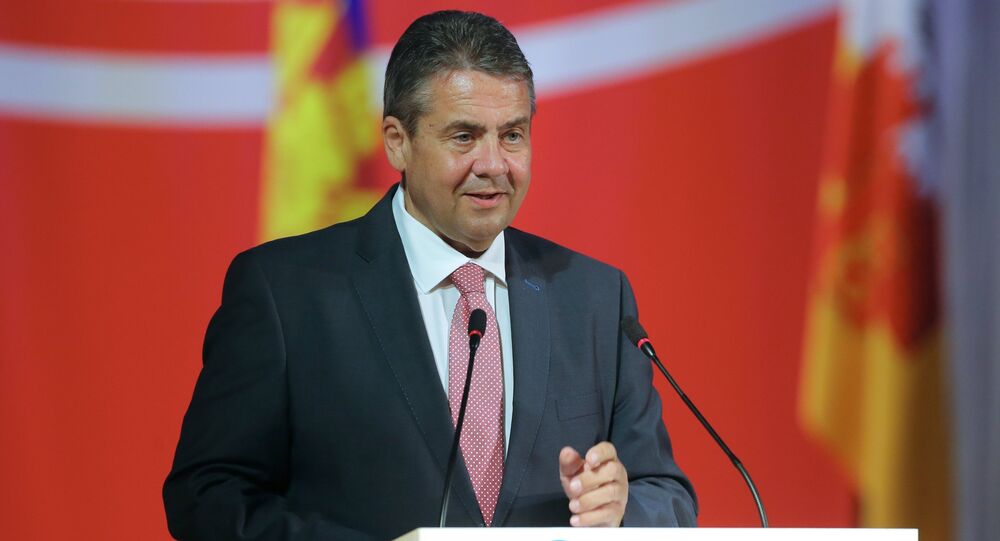 Sigmar Gabriel, Germany's top diplomat, has expressed his view on Moscow's role in the fate of Syria as Damascus, supported by Russia's humanitarian, political and military actions, is about to get the upper hand in the fight against terrorism in the six-year-long war.

"We see that Russia… will largely shape the post-war political future of Syria, as others have not done it," German Foreign Minister Sigmar Gabriel said speaking at the Berlin foreign policy forum on Tuesday.

Since September 30, 2015, Russia has been engaged in helping Damascus to wrestle down Daesh, al-Nusra Front and other terrorists, in parallel providing humanitarian aid and facilitating reconciliation dialogue within the state and on international platforms, such as that in Astana.

Syrian government forces with Russian aerial support have achieved a major breakthrough recently, with lifting a three-year-long Deir ez-Zor siege and liberating the last Daesh stronghold the city of Abu Kamal. Now the offensive in the Euphrates River Valley, where the remaining Daesh units are currently still active, continues.

© AP Photo / Hassan Ammar
Syrian Minister to Sputnik: Nation's Industry on Intensive Path to Recovery After Years of Strife
However, Russian efforts do not end here, as Moscow together with Iran and Turkey is actively engaged in peace settlement process. On November 22 Russian, Iranian and Turkish presidents Vladimir Putin, Hassan Rouhani and Recep Tayyip Erdogan held a meeting in Russia's Black Sea resort of Sochi, where they reaffirmed their commitment to continue de-escalation efforts in Syria within the framework of the Astana process. Three leaders also decided to hold a Syrian National Dialogue Congress, an event which will bring together a number of opposition and pro-governmental forces, as well as representatives of all Syrian ethnic and religious groups, scheduled for early December.

"Russia remains a neighbor of Europe and a very influential neighbor, as the example of Syria shows. Security and stability in the long term are possible only with Russia, and not against it," Sigmar Gabriel said.

The German foreign minister also stressed that "the threat of proliferation of nuclear weapons can be stopped only with the participation of the United States, Russia and China."

The situation around the North Korean nuclear program aggravated after Pyongyang's recent missile launch, the most powerful so far. The missile test was universally condemned as another dangerous provocation, however, there is no consensus amongst the international community about how to contain the threat.

Meanwhile, Russia is calling for the world's powers to refrain from further escalating tensions. In particular, Moscow suggested that that the US and South Korea cease conducting military exercises on the Korean Peninsula, whereas North Korea, in turn, stops the nuclear and missile tests.

Earlier, Russia and China proposed the so-called "double freeze" plan, which stipulates the simultaneous cessation of Pyongyang's nuclear tests and US-South Korea joint drills, however, Washington, has rejected the initiative.

At the Berlin foreign policy forum Sigmar Gabriel also urged Germany to pursue its foreign policy interests more assertively, adding that Berlin's perception of the US role has changed and Germany will view Washington "as one partner among many."

READ MORE: Russia, US Moving Away From Lowest Point in Bilateral Relations — Ambassador

© Sputnik
How Anti-Russia Sanctions Affect Global Trade
Gabriel cited an example of anti-Russian sanctions in this regard, which, according to the minister, can lead to dire consequences for energy supplies in Germany as sanctions affect Russian pipelines.

Amid growing anti-Russian sentiment in the US in the wake of accusations of Moscow's alleged interference in 2016 presidential election, in August, President Donald Trump signed into law a bill expanding anti-Russian sanctions, which particularly targets projects in the energy industry.

For its part, Moscow criticized the US move, saying that the sanctions are aimed at forcing Russia out of the EU energy market.

Russian Military Denies Claims of Airstrikes on Village in Syria