International observers have voiced their skepticism over the publication of the US Treasury's Kremlin Report in their interview with Sputnik. According to the analysts, the document contradicts the norms of international law and is likely to prove inefficient as an instrument of pressure on Russia's foreign partners and domestic elite.

The so-called Kremlin Report, released by the US Treasury Department on January 29, has stirred up a heated debate among international observers. Analysts from Iran, Italy and Turkey shared their views on the document with Sputnik.

"Instead of pursuing a policy of widening and strengthening friendly ties, peace and stability, the [Americans] have chosen the path of aggression, interference, scandal and conflict-mongering, confrontation and destabilization," Hossein Sheikholeslam, head of the Iranian social organization "Freedom to Holy Jerusalem" and a former adviser of Iran's minister of foreign affairs, told Sputnik, dubbing Washington's approach "stupid" and in contradiction to international laws and norms.

No Stress: US Treasury Justifies 'Copy-Pasting' of Kremlin Report
Drawing the parallel between the Kremlin Report and the anti-Iranian sanctions policy the former official noted that the US intimidating strategy has repeatedly failed: "If their sanctions were that effective, they would have been able to destroy Iran. But that did not happen. On the contrary, the sanctions stimulated the development of our country."

According to Sheikholeslam, "sanctions are for the weak, for those who cannot fairly face challenges."

Maryam Jalavand, an international law specialist and a teacher at Payame Noor University in Tehran, echoed Sheikholeslam by stating that the US' recent decision is illegal and violates international law.

The academic drew attention to the fact that to date the US has unilaterally introduced more than 61 types of sanctions against 35 countries. "And this is at least 40 percent of the world's population," Jalavand remarked.

Kremlin Report: Analysts Explain Why US Effort to Sap Russia Doomed to Failure
"In the meantime, from the point of view of international law, such unilateral actions by the US towards countries such as Russia are considered a violation and a direct intervention in the country's internal affairs. Because, according to international law, imposing sanctions is a measure that forces one's counterpart to abide by certain restrictions, which creates a number of problems," she stressed.

The academic explained that the inclusion of a large number of Russia's top ranking officials in the list directly violates international law as it envisages the potential freezing of their assets: "This, in turn, means freezing the assets and credits of the state," the specialist pointed out. "This is the reason why such a measure from the US is considered a violation of international law." 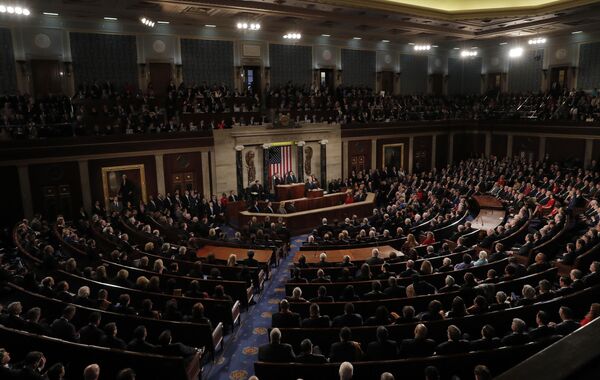 U.S. President Donald Trump delivers his State of the Union address to a joint session of the U.S. Congress on Capitol Hill in Washington, U.S. January 30, 2018
© REUTERS / Carlos Barria

Italy: It Looks Like a One-Sided Cold War of a New Type

Italian journalist and political analyst Giulietto Chiesa, a regular contributor to Sputnik, notes that the Kremlin Report includes officials "belonging to all political trends, from pro-Western to ardent patriots."

"This is not just an ominous gesture addressed to Russian influential figures," Chiesa noted, "I emphasize that the decree of the president of the United States dated December 21… gave the Treasury truly universal rights, granting it the capability to sequester all the assets of the persons mentioned in it, thus creating a kind of a new planetary legislation, under which the United States unilaterally obtains the right to decide the fate of political and economic figures of the rest of the world."

According to the Italian journalist the whole spectrum of relations between the two countries has been put at risk while all the existing opportunities for holding a dialogue have been undermined.

"So far, Moscow has no choice but to take a step towards a further deterioration of ties, which looks like a one-sided cold war of a new type which could lead to a complete severance of relations," he warned.

According to Soner, the Kremlin Report is nothing but a US attempt to maintain its hegemony amid the swift rise of Eurasian nations.

"The US actions are directed not only against Russia, but also against the countries of the Eurasian and Asian region interacting with Russia," Soner suggested, adding that "Washington is concerned that the Eurasian Economic Union is emerging as a real alternative to American dominance."

Kremlin Report: US Tries to Punish Russia for Success on Int'l Arena - Analyst
However, the politician assumed that the release of the report will produce little if any effect on the world affairs.

"This US step would once again demonstrate to the world the ineffectiveness of instruments of pressure used by the US since the Cold War," Soner said. "The United States should abandon the tools of imposing its will unilaterally and take its place in the modern multipolar world system."

For his part, Ozdemir suggested that Washington's major goal is to sow discord among the Russian elite which US politicians want to use as a bargaining chip in its game with Moscow.

According to the scholar, the White House is sending an unambiguous message to Russia's influential circles: "Either act against your leadership, or reap the fruits of inaction."

"We are witnessing how finance and economics are used as a political tool," Ozdemir noted warning that the US recent move may "lead to increased tensions in the relationship," and "even become a reason for financial war."

The Kremlin Report contains a list of persons related to Russia's leadership and are presented as potential targets for the US' new anti-Russia sanctions. The document which was created in compliance with the Countering America's Adversaries Through Sanctions Act (CAATSA) and signed into law by President Donald Trump on August 2 names 114 Russian politicians and 96 businessmen.