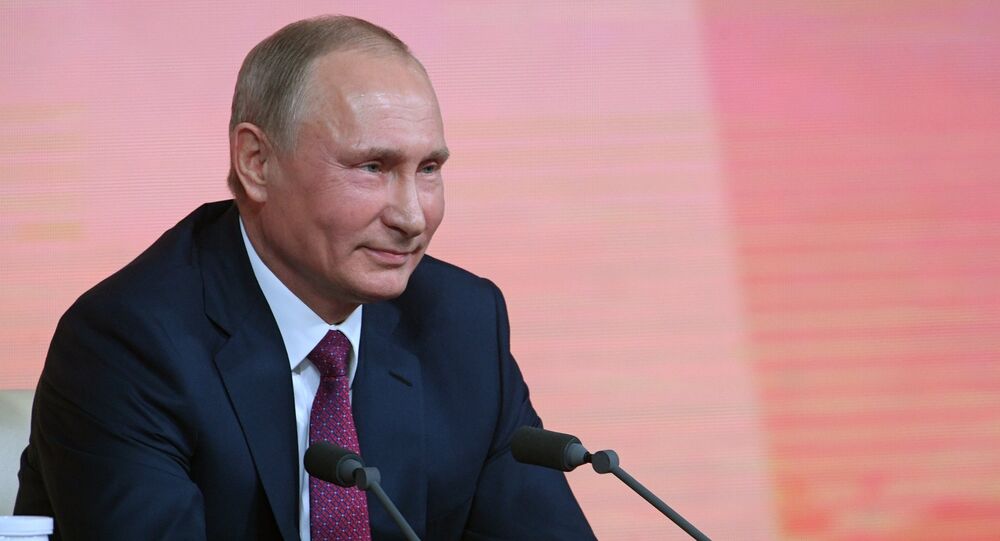 The Russian president has commented on the report, released by the US administration on Monday, which includes a list of 114 Russian politicians and 96 businessmen who may face new US sanctions in the future.

The US Treasury Department intends to impose new anti-Russian sanctions in "near future," within next several months, according to Treasury Secretary Steve Mnuchin. This comes after earlier in the day, Mnuchin said "there will be sanctions that come out" of the so-called "Kremlin report" that was released on Monday.

Commenting on the release of the report, President Putin joked he was "sad" that he hadn't been on the list, adding that he only heard of the document from his colleagues but hadn't seen it.

"We [Russia] need most of all to think about ourselves, we need to deal with our economy, agriculture, we need to support exports, health, education, defense," Putin noted, saying Russia needs to focus on its internal development rather than on a list prepared by foreign states. If Russia is fully developed, he added, there will be a common understanding there is no point "in compelling any lists, threatening [Russia] or trying to deter our development."

© AP Photo / J. Scott Applewhite
No Guarantees US Not to Introduce New Sanctions 'Tomorrow' - Russian Envoy
The Russian president went on to say that the report represents an unfriendly step by the US administration, saying that it harms Moscow-Washington relations. Putin pointed out that that people behind the report are attacking their own government, by pushing it toward confrontation with Moscow.

Despite that, Moscow will refrain from retaliatory measures and will act in accordance with the development of the situation, Putin added, saying that Russia is in favor of development of relations with the US.

While Peskov said that the inclusion of top Russian politicians and businessmen in the report was "unprecedented," Matvienko called the publication of the document a "flagrant interference" in Moscow's domestic affairs.

Medvedev jokingly said that non-inclusion to the reports is a reason to quit the Russian government, stressing that almost everyone put into an administrative position by President Putin has been added to the report.

What is the Kremlin Report About?

The US Treasury Department published the document, which has been dubbed by the media as "the Kremlin report," on Monday. It is a list of the most senior 114 Russian politicians and 96 businessmen who might be sanctioned by the US administration in the future. It includes ten Russian ministers, such as Prime Minister Dmitry Medvedev, Defense Minister Sergei Shoigu and Foreign Minister Sergey Lavrov among other high-profile officials.

Among the business people included in the list are Oleg Deripaska, Vladimir Bogdanov and Filaret Galchev, as well as Magnit retailer founder Sergey Galitsky and LUKoil Vice President Leonid Fedun.

The report was prepared on the request of the Countering America's Adversaries Through Sanctions Act (CAATSA), which was made by the US Congress last July and signed into law by President Trump in early August.

The document does not automatically stipulate the introduction of new restrictions:

"Inclusion in this report… does not constitute the determination by any agency that any of those individuals or entities meet the criteria for designation under any sanctions program. The inclusion… does not… imply, give rise to, or create any other restrictions, prohibitions, or limitations on dealings with such persons by either US or foreign persons," it reads.