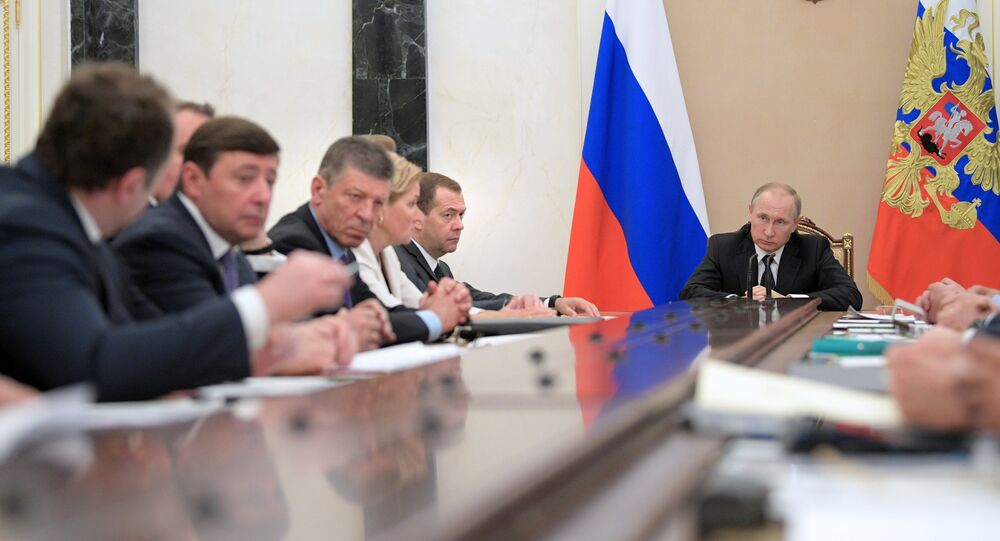 There are several "layers" to the EU's anti-Russia sanctions cake, but their main aim is to force political change in Russia, political scientist Konstantin Voronov told Radio Sputnik.

© Sputnik / Konstantin Chalabov
Full-Fledged Russia-Ukraine Cooperation 'Inevitable' Given Deep Historic Ties
On Thursday, Russian Prime Minister Dmitry Medvedev said that the government is planning a response to the EU's economic sanctions against Russia, which were prolonged on Wednesday until January 31, 2018.

Speaking at a cabinet session, Medvedev expressed regret that "our European partners continue this not very constructive line with regard to our state."

"Once again, politics takes over the economy and by and large over common sense in general," Medvedev said.

Konstantin Voronov, director of European Political Studies at the Russian Institute of World Economy and International Relations, told Radio Sputnik that there are several layer to the EU's sanctions.

"I think this is a sort of 'layer cake.' Firstly, there is certainly a large ideological component in the foreign policy course of our European neighbors and partners. That is, these sanctions meet their ideological evaluation of Russia's activities with regard to the Ukrainian crisis."

"Secondly, this 'multilayeredness' also has political component – this is the desire to change Russia's foreign policy. The third layer is a practical component, that is, how much these sanctions are correlated with practical ties – economic, financial, and so on," Voronov said.

Of these three aspects – the ideological, political and practical – the most important objective is political, Voronov said.

"Above all, they would like to change Russia's foreign policy course. That's what they expect in the West: that the pressure of sanctions will force Russia to change its policy with regard to Crimea and Ukraine, to take a retrograde step. That is the main goal of our partners in Europe and in the West as a whole," the analyst explained.

The EU, US and a handful of their allies first imposed sanctions against Russian individuals and companies in March 2014, following Crimea's decision to rejoin with Russia in the aftermath of the Euromaidan coup d'etat.

Moscow, in turn, put in place a food embargo on a wide range of products originating in the countries which had targeted Russia with sanctions.

In 2013, Ukraine's largest trading partners were Russia, China and Germany, whose trade turnover with Ukraine totaled $38.2 billion, $10.6 billion and $8.4 billion respectively. Close economic ties with Russia led Moscow to propose Ukrainian membership of the Eurasian Economic Union, a free trade area which would build on existing links between countries in the post-Soviet area.

Russia was still the single largest investor in Ukraine in 2016, according to the State Statistics Service of Ukraine. Year-on-year, Russian investors increased their investment in the country by 250 percent, to $1.667 billion, accounting for 38 percent of all total investment.

© Sputnik / Vasiliy Batanov
Ukrainian Daydreams: Why Kiev's Plans for Crimea are Doomed to Flop
However, with encouragement from Washington, the EU offered Kiev an EU–Ukraine Association Agreement and Deep and Comprehensive Free Trade Area (DCFTA). Moscow warned of an inevitable tightening of customs procedures for Ukraine's largest export market, which led the Ukrainian government to suspend the signing of the agreement with the EU and begin negotiations to join a customs union with Russia, Belarus and Kazakhstan.

The government's decision led to protests from supporters of EU integration in Kiev's Independence Square, or Maidan Nezalezhnosti. On February 18-20 2014, hundreds of people died in clashes between protestors and security forces, violence which ultimately led to the ouster of the democratically elected Yanukovych government.

However, Yanukovych denied giving orders to fire on protestors and subsequent research has found that the killings of protesters were organized by far right paramilitary groups and allied opposition parties, not the former government's Berkut riot police, as claimed by the current Kiev government and repeated by Western media.

Washington Wants to Sell Coal to Ukraine, Other Countries Around World