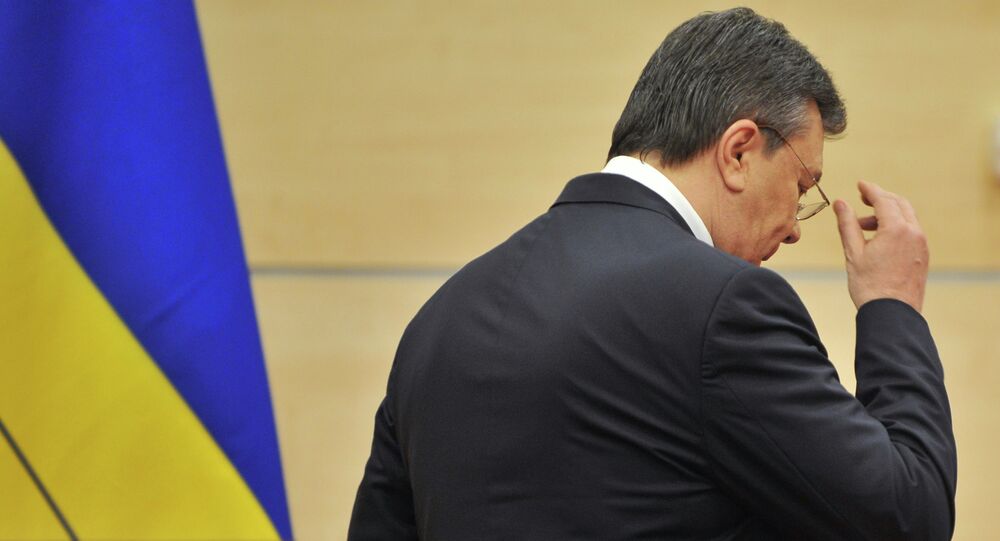 Ukrainian President Petro Poroshenko appealed to the country’s constitutional court, asking the court to recognize the ousting of former President Viktor Yanukovych in February 2014 as illegitimate.

"I ask the court to acknowledge that the law ‘on the removal of the presidential title from Viktor Yanukovych' as unconstitutional," Poroshenko said in a court statement published on the website of the Ukrainian constitutional court.

The current Ukrainian president said the law violates the constitution, according to which the President of Ukraine is protected by law and his title remains with him forever. He also added that by enacting the law in February of 2014, the parliament of Ukraine undermined the constitution.

Now, the amusing fact is that Poroshenko himself actively supported the Euromaidan protests between November 2013 and February 2014 in Kiev that resulted in the overthrow of Yanukovych.

© AP Photo /
UK PM Blames Ukraine Ex-President Yanukovych for 'Discontent, Instability'
As the current head of Ukraine, who became the president after the illegal coup, Poroshenko's statement seems strange at best. By admitting that the overthrow of Yanukovych was illegal and stressing that the President of Ukraine should be forever protected by the country's law, Poroshenko might be insinuating that his own presidency is put in jeopardy.

Otherwise, why would someone else who became the president after the coup all of a sudden defend the former leader of the country? Seems illogical.

Alexei Pushkov, the head of the Foreign Affairs Committee of the Lower House of Russia's parliament, commented on Poroshenko's bizarre revelation.

"Here we go, Poroshenko acknowledged the unconstitutional nature of Yanukovych's removal from power. The EU and PACE both denied it. Now it's recognized," Pushkov wrote on his Twitter account.

Last year, Yanukovych became the scapegoat of Ukrainian politics after his government was accused of all the misfortunes in the country. Now, more than a year after the former president was gone, his legacy is still around. Mikheil Saakashvili, the new governor of Ukraine's Odessa Region, said that in the best case scenario, Ukraine will need 20 more years to reach the economic level of Yanukovych's government in 2013.