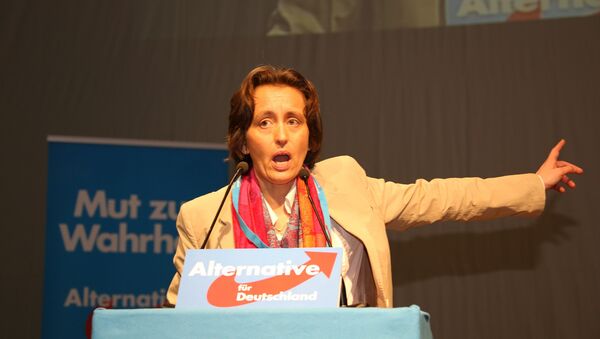 Member of the European Parliament from the right-wing Alternative for Germany (AfD) party, Beatrix von Storch, stated that the governments of the European Union member states are putting the European project before economic sense by imposing sanctions on Russia.

Russia
EU Sanctions Against Russia Failed to Reach Intended Aim - Foreign Ministry
BERLIN (Sputnik) — The EU decision to prolong sanctions against Russia means that the governments of the bloc's member states have prioritized the European project over economic benefit and their citizens’ jobs, a member of the European Parliament from the right-wing Alternative for Germany (AfD) party, Beatrix von Storch, told Sputnik Wednesday.

Earlier in the day, the Council of the European Union, which groups the 28 EU member states, formally prolonged economic sanctions against Russia for another six months over the alleged lack of progress in the implementation of the Minsk accords on Ukrainian settlement.

Russia
Russian Senator Says Extended Sanctions on Moscow Sign of EU’s 'Inertia'
The sanctions are also a flawed approach to solving the Ukrainian conflict, she added.

“To continue the sanctions is to continue a failed policy that historically has proved very ineffective… This is a regional issue that we cannot win. Whenever the European Union and the United States raise the stakes, the Russians will simply go higher. If we do not put a stop to our interference this will end badly for everyone,” the lawmaker warned.

The European Union, along with the United States, continually prolongs sanctions against Russia, imposed after Brussels and Washington put the blame for the eastern Ukraine conflict on Moscow and refused to recognize Crimea’s rejoining Russia as a result of the March 2014 referendum. Moscow has repeatedly refuted the allegations and in August 2014 introduced retaliatory restrictions on food imports, which were prolonged until the end on 2017.