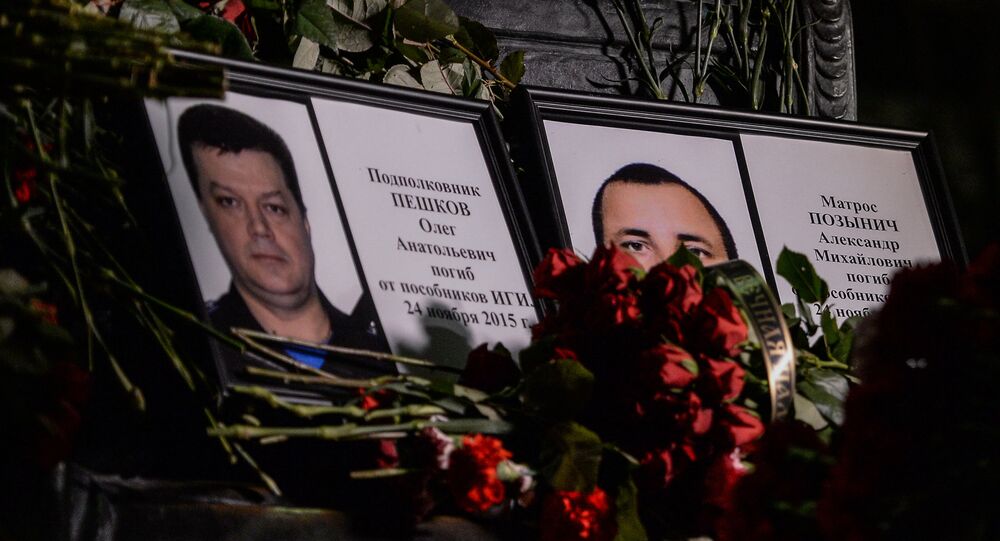 The relatives of Oleg Peshkov, the pilot of the Russian Su-24 bomber that was downed by the Turkish Air Force jets in Syria, refuse to believe that he is dead. According to them, he may be injured or taken prisoner.

© Flickr / UK Ministry of Defence
Make No Mistake: Su-24 Downing by Turkey a 'Clear Act of War' – US Author
As Moscow mourns the death of the Russian pilot and the marine who were killed on Tuesday in Syria, the family of the pilot refuses to believe that Oleg Peshkov is dead.

Oleg Peshkov was born in the Lipetsk region of Russia and as his friends have said, he has always had dreams of becoming a pilot. He finished Suvorovskiy Military Academy with a gold medal. He went on to study further and upon completion he had difficult assignments in various hot spots, Vesti News reported.

On Tuesday, a Russian Su-24 bomber jet flown by Oleg Peshkov was shot down by an air-to-air missile of a Turkish F-16 jet over Syria and fell 4 kilometers from the Turkish border.

There was a memorial service for him in Moscow and in his hometown in Lipetsk where his many colleagues, friends and neighbors came to pay tribute and lay flowers in the church where the service was held.

However, in an interview with the Russian newspaper ‘Komsomolskaya Pravda’ the younger brother of the pilot, Pavel Peshkov, said that the body has not been found, hence, he does not believe that his brother is dead.

Pavel said in an interview that he spoke with Oleg on November 14th and Oleg told him that he was leaving for an assignment for two months. “For my brother this was not the first assignment, he has worked in hot spots before,” Pavel Peshkov said.

“I knew this was his job and I wasn’t even worried. He is a fighter pilot and he is a good specialist. He has many flight hours and experience.”

However, when information appeared about a downed Su-24, his relatives got worried. “I looked online thoroughly for available information,” Pavel said. “At first there was information that it was a different person and that the plane was from Chelyabinsk. I was relieved but then my brother’s wife called again saying that it was ours and that in the airplane there was Kolya, the navigator, and Oleg. Who survived and who died that was unclear.”

© Sputnik / Dmitriy Vinogradov
Turkey Claims Did Not Release Audio of F-16s Warning Russian Jets - Moscow
The relatives of Oleg Peshkov were informed of his death only after the navigator who survived was brought to the airbase.

“I do not believe this information and the videos that the militants published. There is no body. I know my brother, he is a fighter. Maybe he is hurt or has been taken prisoner but until and unless I see his body I refuse to believe that he is dead,” Pavel said.

He further talked about how he has seen all of the videos that have been released by the militants next to the body of the Russian pilot, “There are those (videos) where you can see the face but it is covered in blood. I do not see familiar features, I do not recognize them. For me that is not him. I am ready for a DNA test because I do not believe it.”

Oleg Peshkov’s entire family continues to hope that he is still alive. He has two children, a 16-year-old daughter and a younger son.

Following the crash of the Su-24, the Russian General Staff claimed that the bomber didn’t cross the country’s border and this data was confirmed by intelligence from the Syrian anti-aircraft defense forces.

Ankara is insisting that the Russian plane violated Turkish airspace.