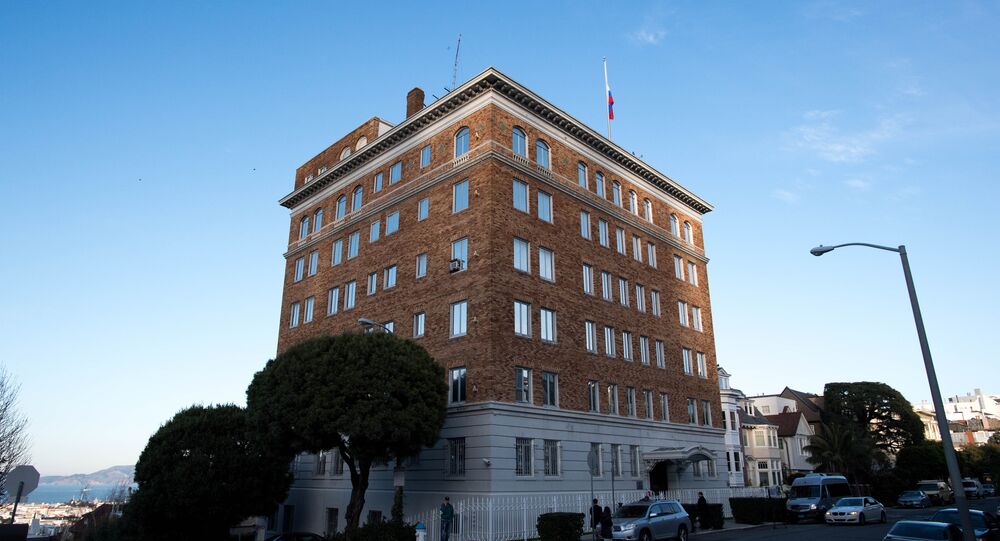 The United States demanded that Russia shut down its Consulate General in San Francisco and two other diplomatic entities in New York City and Washington, DC by September 2, the US Department of State said in a press release on Thursday.

"In the spirit of parity invoked by the Russians, we are requiring the Russian government to close its Consulate General in San Francisco, a chancery annex in Washington, DC, and a consular annex in New York City. These closures will need to be accomplished by September 2," the release stated.

The United States has reduced the size of its staff at the US Embassy in Russia by 455 people as instructed by Moscow in July as a response to the 2016 expulsion of 35 Russian diplomats and sanctions against Russia passed by the US Congress in July, the State Department said.

"The United States has fully implemented the decision by the Government of the Russian Federation to reduce the size of our mission in Russia," the statement read. "The United States is prepared to take further action as necessary and as warranted."

Moscow suspended the use of all warehouses in Moscow by the US embassy starting from August 1 following the US Senate's approval of a new set of sanctions against Russia, Iran and North Korea.

"The United States hopes that, having moved toward the Russian Federation's desire for parity, we can avoid further retaliatory actions by both sides and move forward to achieve the stated goal of both of our presidents: improved relations between our two countries and increased cooperation on areas of mutual concern," the State Department added.

"In Washington, DC and New York, they [Russian government] have a number of annexes that have different offices," a senior US administration official said during a press briefing. "The annex in Washington, DC currently houses their trade mission and the one in New York also houses a trade mission."

Meanwhile, the Russian consulate in New York said it had "received no official information".