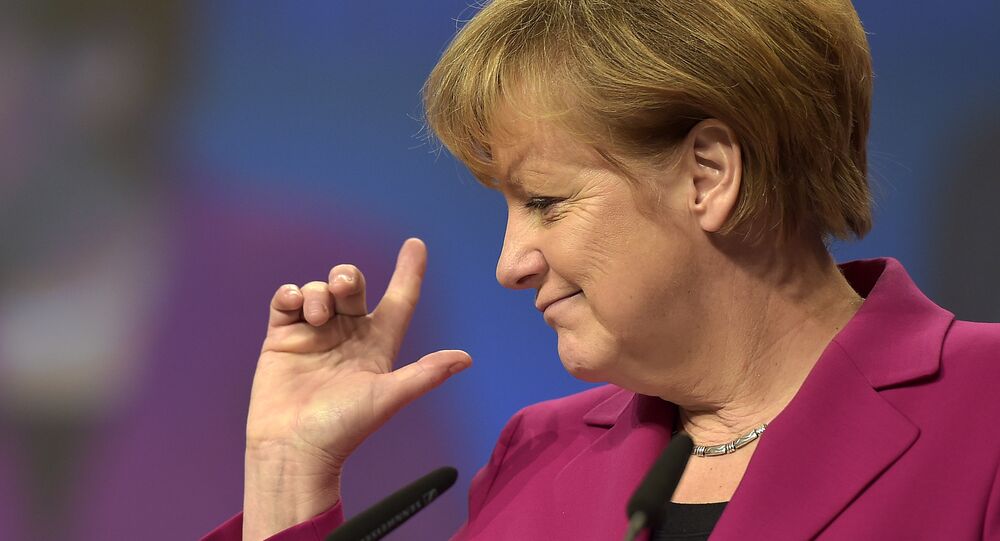 It appears that the US-EU "geopolitical marriage" is bursting at the seams due to the irresponsible foreign strategy of the US political elite, Russian economist Ivan Danilov wrote for RIA Novosti, revealing what could become the final straw for the long-lasting trans-Atlantic union.

© REUTERS / Alessandro Bianchi
Geopolitical Divorce: EU to Choose Between US Blackmail and Chinese Investments
It seems that the geopolitical divorce between the US and the EU may take place sooner than anyone expected, Ivan Danilov, a Russian economist and author of the popular blog Crimson Alter, notes in his op-ed for RIA Novosti.

In his earlier articles Danilov called attention to the growing dissatisfaction with Washington among European leaders, highlighting that the US-EU "marriage" had begun to crack.

However, there is a factor that could accelerate the process, the economist pointed out.

"When the US senators voted for a new package of sanctions against Russia, they were solving domestic political issues, and also tried to limit the freedom of foreign policy maneuver for President Donald Trump. They couldn't imagine that their actions would not only cause a sharp diplomatic reaction from the leading EU countries, but would also lead to the emergence of the issue of retaliatory sanctions against the United States of America in the European media," Danilov wrote.

Indeed, the recent package of anti-Russian measures which is meant to be codified into law has caused a storm of criticism from US allies in Europe.

© REUTERS / Jim Lo Scalzo/Pool
Why US Senators Seek to Codify Anti-Russian Sanctions Into Law
The problem is that the new bill is targeting Russia's energy sector, most notably the Nord Stream 2 project which is intended to carry cheap natural gas from Russia to Europe. Furthermore, Germany's Wintershall and Uniper, Austria's OMV, Anglo-Dutch Shell and France's Engie are directly involved in the project.

In a joint statement, Germany's Foreign Minister Sigmar Gabriel and Austria's Chancellor Christian Kern slammed the decision by the US Senate to impose new sanctions on Moscow over its alleged interference in the US presidential election as well as the ongoing situations in Ukraine and Syria.

"Threatening German, Austrian and other European enterprises with penalties on the US market only because they take part in the gas supply projects such as the Nord Stream 2 together with Russia or finance them, is adding an absolutely new and highly negative aspect in relations between the US and Europe," the joint statement reads.

For his part, the leader of Germany's Social Democratic Party (SPD), Martin Schulz, lambasted US senators' move and called upon German Chancellor Angela Merkel to oppose it.

"We have the right to defend the industrial interests of the Federal Republic of Germany and Europe," Schulz stressed.

It cannot be excluded that the EU resistance may translate into concrete action, Danilov noted.

© REUTERS / Joe Skipper
Is 'Tillerson Plan' for Ties With Russia Connected to New US Sanctions Bill?
The economist referred to the article by Stuart Elliott of S&P Global Platts who emphasized that the reaction to sanctions from Germany and Austria was "as fierce as it was immediate" and that "there has even been talk already in Berlin of reciprocal sanctions against the US."

What Elliott was writing about isn't just a rumor given the fact that earlier, on June 16, German Economy Minister Brigitte Zypries told Reuters that Berlin would mull over counter-measures if US President Trump signs the anti-Russian sanctions bill.

"If he does, we'll have to consider what we are going to do against it," Zypries said.

However, it's not just obstacles in the way of receiving cheap Russian gas which have sparked Berlin and Vienna's concerns.

"There is no reason to believe that Gazprom would stop work to build the pipeline, even if sanctions block the five European companies from investing further in the project," Elliott remarked.

Germany and Austria suspect that Senate's anti-Russian bill is an attempt to "occupy" the European energy market on the part of US corporations.

"Germany and Austria went one step further, too — accusing the US of looking to promote the role of US LNG in Europe at the expense of Russian gas," the S&P Global Platts writer underscored, adding that the US apparently wants to kill two birds with one stone by exerting sanctions on Nord Stream 2: to "punish" Moscow and promote US LNG supplies in Europe, "which would have the knock-on effect of supporting domestic US gas industry."

In this context, Danilov wrote, it is most likely that potential anti-American sanctions would be aimed not at inflicting any economic damage on the US but at sabotaging Washington's attempts to seize the European energy market.

"A ban on the import of American LNG into the EU countries could have become a very effective tool to prevent America's attempts to influence the European market," Danilov assumed adding that this measure could potentially attract wide public support.

© Sputnik / Sergey Guneev
Trade War: US Pressures EU to Nix Nord Stream 2 to Remove Russia From Gas Market
"Obviously, this ban would not comply with WTO rules, but possible US sanctions against European gas companies are also a gross violation of [WTO] regulations," the Russian economist stressed.

According to Danilov, the much-discussed US bill may become the final straw that will break the US-EU "geopolitical marriage."

"This is the first time when anti-American sanctions are being discussed in the European information filed while European diplomats and officials are fiercely criticizing their US partners, which have become accustomed to Europe's submissiveness," the economist wrote.

It appears that the US political elite have completely forgotten that the interest of its European partners should be taken into account, Danilov concluded.

New US Sanctions Not on Table for Canceled Ryabkov-Shannon Meeting - State Dept.

New US Bill Aims at Boosting Russia Sanctions, Increasing US Military in Europe