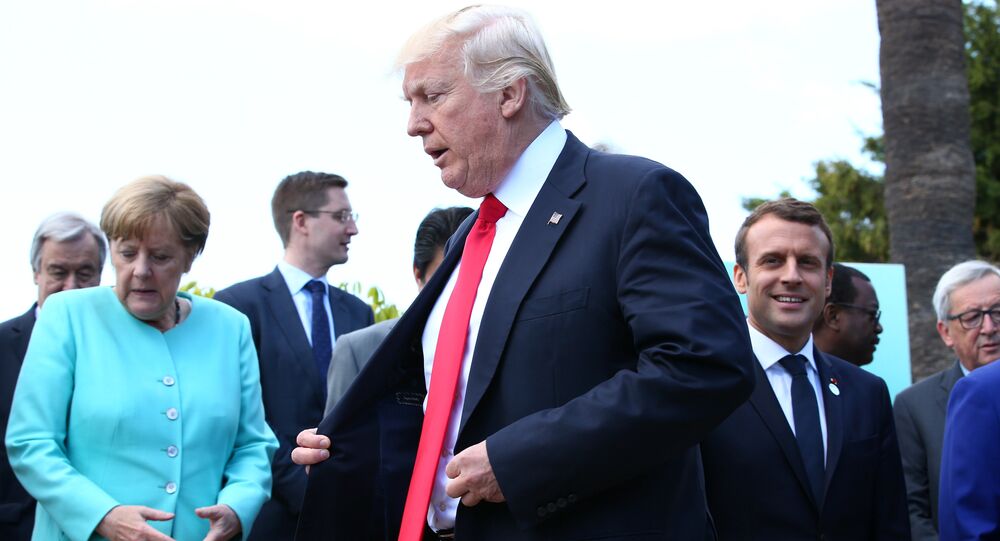 Geopolitical Divorce: EU to Choose Between US Blackmail and Chinese Investments

Chancellor Angela Merkel's recent call for Europeans to take their fate into their own hands resembles a move towards the EU's "geopolitical divorce" from Washington, Russian economist Ivan Danilov writes for RIA Novosti.

It appears that German Chancellor Angela Merkel has decided to "get a divorce" from Washington, Ivan Danilov, a Russian economist and author of the popular blog Crimson Alter, writes for RIA Novosti.

"The times in which we could completely depend on others are, to a certain extent, over," Merkel told an election rally in Munich following US President Donald Trump's visit to Europe. "I've experienced that in the last few days; we Europeans truly have to take our fate into our own hands."

© AP Photo / Andrew Harnik
Trump Offers Moscow a Way Out of the Ukrainian Stalemate – Can Russia Trust Him?
According to Danilov, Merkel's statement resembled nothing so much as a petition for geopolitical divorce from the US due to a US misunderstanding of the EU's role in global politics.

However, the crisis of transatlantic solidarity between Washington and Brussels has both ideological and financial causes.

There is a problem that has become the apple of discord between US and EU leaderships and the price of this apple is almost 330 billion euros per year.

"The aforementioned figure corresponds to 2% of the EU's GDP for 2015; this particular 'tribute' is demanded by the US president in the form of annual European investments in the collective 'defense piggy bank'," Danilov wrote.

© REUTERS / Michaela Rehle
Merkel Wins Over Bavarian Beer Tent With 'Can't Rely on Others' Dig at Trump
Indeed, during his appearance at the NATO headquarters, Trump signaled clearly that the payback time has come.

Members of the alliance must finally contribute their fair share and meet their financial obligations," Trump said, "Twenty-three of the 28 member nations are still not paying what they should be paying and what they are supposed to be paying for their defense. This is not fair to the people and taxpayers of the United States."

The truth of the matter is that during his election campaign Trump promised the American military-industrial complex that he would force NATO member states to fork out, the blogger explained. Now the US president is simply delivering on his election promise.

To add to the controversy, what Trump demands is nothing but a "tribute," not just payment for "security services," Danilov highlighted, calling attention to the fact that the US president failed to pledge a commitment to Article 5, dedicated to the alliance's collective defense.

Instead of endorsing the "one-for-all, all-for-one" principle, the US president "offered a vague promise to 'never forsake the friends that stood by our side' in the aftermath of the Sept. 11 attacks," the New York Times wrote, commenting on the issue.

"The White House told the NYT yesterday that Trump would finally endorse Article 5. The fact that he did not is astonishing and it shows… that someone in the White House or POTUS [Trump] himself took it out. This will come as a huge shock to NATO members," Thomas Wright, the director of the Center on the United States and Europe at the influential Brookings Institution, tweeted.

© REUTERS / Jonathan Ernst
New World Order: How Global 'Grand Chessboard' Turned Into a 'Card Table'
In the eyes of the Europeans, this means that they are offered to pay 330 billion euros per year virtually for nothing: Trump has not provided them with any security guarantees, Danilov remarked.

In this context, the idea of a new European armed forces, which has been repeatedly voiced by President of the European Commission Jean-Claude Juncker, takes on a new significance, he added.

Back in November 2016, Juncker told reporters that the EU needs to "overhaul" its defense strategy and consider the creation of a European army.

"We have a lot to thank the Americans for… but they won't look after Europe's security forever. We have to do this ourselves, which is why we need a new approach to building a European security union with the end goal of establishing a European army," Juncker said.

© AP Photo / Carolyn Kaster
'Germans Are Bad, Very Bad' - Trump on Country's Huge Car Export Volumes to US
According to Danilov, EU officials would rather endorse spending 330 billion euros per year on European needs, rather than hand this money to the US president and Pentagon.

There is yet another factor that could deepen the rift between the EU and Washington: Trump has reportedly threatened to complicate the access of German automakers to the US market.

"The Germans are bad, very bad," the US president said, as quoted by Der Spiegel's sources, "See the millions of cars they sell in the US, terrible. We will stop this."

Such a prospect would obviously disappoint both Chancellor Merkel and her voters, Danilov remarked, adding that the German leader is not the only European official disheartened by Washington's growing ambitions.

Meanwhile, there is a potential light at the end of the tunnel and this "light" is called the China-led One Belt One Road initiative, the Russian blogger emphasized.

"Indeed, against the background of open American blackmail and general hostility, Chinese investments, as well as the Chinese globalization project 'One Belt — One Road', in which Russia plays a key role, look very attractive in the eyes of the EU," Danilov stressed.

While the geopolitical divorce between Washington and the EU will apparently take a lot of time, the giant crack has already appeared, the blogger believes.

US, EU 'Should Tackle Their Relations by Themselves' - Kremlin on Merkel's Words