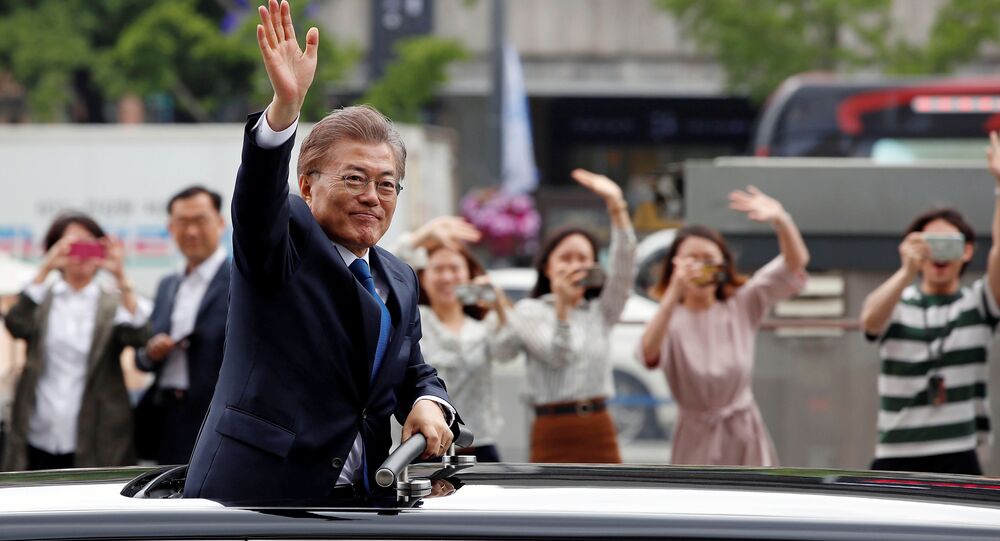 © REUTERS / USFK/Yonhap
THAAD Deployment: What to Expect From South Korea’s New President
Moon Jae-in's rise to power in South Korea may potentially ease the ongoing tensions on the peninsula.

"The victory of President Moon was just as predictable as the defeat of Marin Le Pen. His rivals did not have a chance — which is understandable, if you recall the monthslong scandal surrounding Moon's predecessor, impeached [South Korean President] Park Geun-hye. The candidate from her party was well aware that he would lose," Kosyrev wrote.

What is more important, it was clear that the coming to power of the Democratic Party of Korea's presidential candidate would signal a change in Seoul's attitude toward North Korea and its "nuclear threat," he highlighted.

In light of this one may assume that Moon's win plays directly into the hands of Moscow and Beijing, which are making efforts to prevent further escalation of the North Korean nuclear problem.

© AFP 2021 / KIM JAE-HWAN
South Korea: Rising Moon of the East
Kosyrev noted that if one takes a look at the list of Moon's election promises, one would see that the newly elected president is likely to push ahead with the rapprochement between Seoul and Pyongyang within the framework of the so-called "Sunshine Policy."

Andrew Korybko, a political analyst and regular contributor to Sputnik, suggested that the election of South Korean President Moon Jae-in "presents a historic opportunity for the country to earn its rightful place in the Multipolar Century."

"South Korea's new leader basically branded himself as a breath of fresh air in a stale political climate, and true to his populist positions, he immediately said that he'd be a "president for the people" following news that he won the election by a landslide," Korybko wrote in his recent op-ed for Sputnik.

"Should Moon succeed in his stated agenda, then he has the chance to historically redefine South Korea's place on the world stage and turn it into a powerful multipolar actor in Asian affairs," he stressed.

© Sputnik / Michael Klimentyev
Japan's Abe Hopes to Meet South Korea's Moon to Discuss Cooperation
The question then arises whether Washington is satisfied with the outcome of the South Korean election given the fact that Moon is looking forward to strengthening ties with China, Russia, Japan and the US and is going to learn how to say "no" to America.

"This is primarily about the installation in South Korea of the American system of anti-missile defense (THAAD). In short, the Americans dragged these anti-missiles into the country ahead of schedule, in April, being well aware that the favorite of the May [presidential] elections would like to dismantle these systems," Kosyrev underscored.

After Moon's election, the future of the US-made Terminal High Altitude Area Defense (THAAD) system in South Korea may be thrown into doubt.

"In any case, exactly what is happening now is in the interest of China and Russia: namely, the ambiguity surrounding THAAD, with its possible de-installation, the emergence of the prospect of negotiations with Pyongyang (no matter with what participation) and the 'sunshine' policy [pursued by] the new South Korean President," Kosyrev wrote.

As for Moon and the Democratic Party of Korea's political affiliation, he is a left-wing politician, according to the Russian political commentator.

"If one carefully looks at the election program of the new South Korean leader and his biography, one will see that [Moon] is a lawyer and human rights activist, a little bit of a socialist who is calling for raising taxes, salaries and pensions, and who opposes nuclear and coal energy. He also wants to be 'closer to the people' and plans to move the presidential office to the business part of the city," Kosyrev remarked.

"That means that if Moon were American, he would be called Bernie Sanders, and if he were French, he would be Francois Hollande or, even Emmanuel Macron," he added.

However, while the aforementioned liberal Western candidates could by no means be called pro-Russian, it is highly likely that Moon will find a common language with Moscow, Kosyrev believes.

With a New President in South Korea, Could Peace Break Out on the Peninsula?