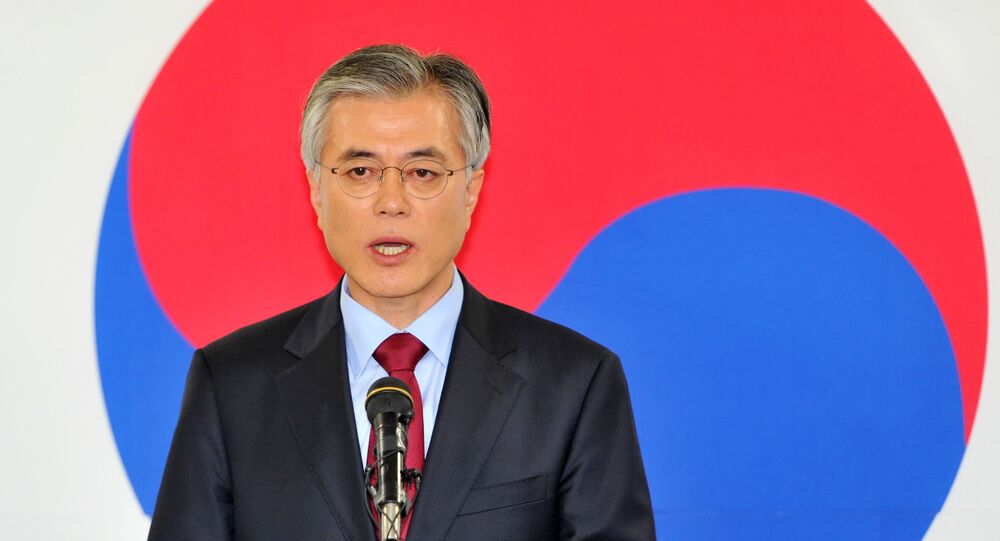 The election of South Korean President Moon Jae-in presents a historic opportunity for the country to earn its rightful place in the Multipolar Century.

South Korea is widely applauded for being one of the Four Asian Tigers which drove regional economic growth for decades during the Old Cold War, but despite its impressive prosperity, the country has lived under the US' shadow the entire time. The contemporary global situation has markedly shifted as the world undergoes the lengthy transition from unipolarity to multipolarity, yet South Korea's relationship with the US remains mostly unchanged, and this is holding it back from realizing its full geopolitical potential.

© REUTERS / USFK/Yonhap
South Korean President Wants to Resolve THAAD Problem in Talks With US, China
While it's true that the government did in fact pursue somewhat of an independent "Sunshine Policy" of rapprochement towards North Korea from 1998-2008, the conservative authorities which have led the country for roughly the decade since have largely dismantled any positive progress from that time. Even worse, they've put South Korea's pragmatic relationship with China in jeopardy in order to satisfy Washington's grand strategic objectives vis-a-vis Beijing and Moscow with THAAD.

Moon, however, pledged to change all of that, campaigning on a broad platform, which emphasized sovereignty for South Korea and equality with each of its partners. He was also voted into office because he ran on an anti-corruption ticket promising to dismantle the influence that family-run megacorporations exert over the government, partially the reason why former President Park Geun-hye was impeached for abuse of power.

South Korea's new leader basically branded himself as a breath of fresh air in a stale political climate, and true to his populist positions, he immediately said that he'd be a "president for the people" following news that he won the election by a landslide. Accordingly, should Moon succeed in his stated agenda, then he has the chance to historically redefine South Korea's place on the world stage and turn it into a powerful multipolar actor in Asian affairs.

Here are the three promises Moon has to deliver on if he hopes to achieve that.

© REUTERS / Yonhap
New S Korean President Promises to Build 'New Country' at Inauguration
"Chaebols" is the Korean term for large family-owned multinational corporations, which have come to dominate the country's economic scene and have subsequently turned into discrete political powers in their own right. In fact, it was a chaebol scandal with Samsung that was one of the many reasons why South Korea's former leader was deposed of on corruption charges. The average Korean is sick and tired of the hidden hand that these companies play over their lives, and they believe that Moon is their man to finally end it once and for all.

Just as Trump is finding out when it comes to making good on his signature slogan to "drain the swamp," Moon is going to have a very difficult time reforming the chaebol system and purging its influence from politics. There are very clear constitutional constraints to what he can do, and his party doesn't have enough parliamentary support to push through his agenda without entering a legislative quagmire full of complicated deal making and concessions. Moon wants to be a force of systemic change in his country, but the system might be much too powerful for one man alone to change.

The reason why he wants to reform the domestic status quo in South Korea is because it's evident to any savvy politician that the populist anti-chaebol sentiment in the country isn't going away anytime soon, and that it was already powerful enough to bring hundreds of thousands of people out into the street in pushing for the impeachment of the former president. South Koreans want to experience a real democracy, not a corporatocracy, and they've finally "woken up" to the systemic problems facing their country and united behind Moon as their best hope to change them.

© REUTERS / Kim Kyung-Hoon
South Koreans Head to the Polls: A New Day for Relations With Pyongyang?
If Moon is serious about having South Korea emerge from the US' shadow, then he absolutely needs to carry through on his word to seek a rapprochement with North Korea. He used to be the chief of staff to former President Roh Moo-hyun who had executed the last five years of the decadelong Sunshine Policy, and Moon's campaign remarks have spoken favorably about reviving it in form. Therefore, whether it's called the same thing as before or something different this time around, South Korea's new leader must return to the policy set by his liberal predecessors and rely on it as the most pragmatic step needed to de-escalate the fearsome war mongering tensions prevalent in the peninsula nowadays.

North Korea didn't go crazy, just like the author explained in a previous Sputnik analysis from over a year ago, although it quite often goes overboard and is easily baited by the US in its reactions. Pyongyang has legitimate security threats, however, which include first and foremost the US' incessant saber rattling against it through live-fire war games right on its border. The reason why this unnerves North Korea so much is because such exercises could conveniently be used as a front for disguising an actual invasion of the country, and given Pyongyang's propensity to seemingly overreact to any provocation, it's both irresponsible and dangerous for the US to manipulate North Korea into this type of security dilemma.

© AFP 2020 / KIM JAE-HWAN
New South Korean President Calls on Army to Maintain High Combat Readiness
The only realistic solution is for Moon to embrace the Chinese proposal that the US and South Korea halt their large-scale war games in exchange for North Korea suspending its nuclear program. The previous caretaker government outright rejected this idea because it wanted to retain political consistency with its conservative-led predecessor, but the people voted for Moon precisely because they crave a radical change in their country's domestic and foreign policies. If he follows in Philippine President Rodrigo Duterte's footsteps by bravely downscaling certain dimensions of his country's military relationship with its mutual defense treaty ally, then it could go a long way towards also improving the deteriorating relations between Seoul and Beijing.

Rebalance Between East and West

South Korea, by virtue of its geographic position, always does best whenever it balances between East and West. For example, one of the main reasons why the country became an Asian Tiger in the first place is because its location allowed it to skillfully manage cheap Chinese labor and hefty amounts of Japanese capital, which proved to be the winning formula that South Korea needed in order to develop during the strict leadership of General Park. Everything was running smoothly enough until Seoul committed to hosting THAAD, and the system actually began to be deployed on its soil just recently, which both Beijing and Moscow viewed as setting a precedent for further anti-missile deployments that could eventually undercut their nuclear second-strike capabilities. Russia isn't in a position to influence South Korea, but China definitely is, and Beijing's economic countermeasures against Seoul (which for all intents and purposes could be regarded as "unofficial sanctions") have had a noticeable impact on its economy.

© REUTERS / USFK/Yonhap
China Tests Weapons Near Korean Peninsula in Protest Over THAAD
If Moon doubles down on a new Sunshine Policy and correspondingly backtracks on his predecessor's THAAD agreement (relying on the decision's disputed constitutionality as a plausible justification), then he can restore his country's all-around relations with China and turn South Korea into a much more strategic balancer between East and West than it was even before the missile crisis began. In a sense, Moon would just be taking a page out of Duterte's playbook in leveraging his country's geostrategic position between China and the US in order to reap the most dividends from both of them as they each fiercely compete for his loyalty.

By playing coy when it comes to the future of THAAD and large-scale war games with the US, Seoul could incite Beijing and Washington into an even wilder rivalry than the one presently playing out for his country, and this would only serve South Korea's ultimate benefit due to its international profile rising as a result and the state subsequently becoming one of the most geostrategic pivots in the world.

For that to happen, however, South Korea must earn a reputation for neutrality and fair play, and it can only do that by distancing itself from the US' unipolar plans against China and Russia. This requires reviving the Sunshine Policy (and eventually Moscow's plans for a Korean Corridor) and relatedly reining in the US' military privileges on the peninsula, and if South Korea's new president can succeed in these tasks without first being stopped by the pro-US chaebol "deep state," then he'll go down in history for making his country the rising Moon of the East in the Multipolar Century.