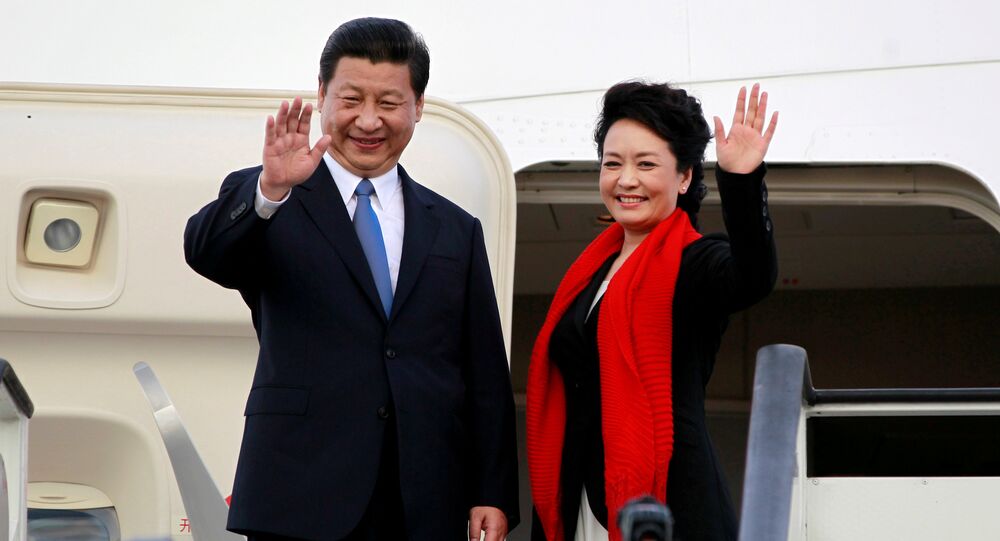 It was no coincidence that Donald Trump ordered to hit the Syrian government force's Shayrat Air Base on April 7 while hosting Chinese President Xi Jinping.

Surprisingly, Xi remained silent in response to the show of force.

"It's not known how Xi responded when Trump informed him of the missile strike, which occurred as they were finishing dinner," enterprise reporter for the McClatchy DC Bureau Stuart Leavenworth wrote last Friday.

© REUTERS / Carlos Barria
Strategic Triangle: Trump Charms Xi to Try to Break Moscow-Beijing Partnership
"Afterward, Xi and other Chinese leaders seemed hesitant to respond to the missile strike," he continued, adding that "at a briefing in Beijing on Friday, Chinese Foreign Ministry spokeswoman Hua Chunying offered only a muted comment: 'What is imperative now is to prevent further deterioration of the situation'."

Beijing's nonchalant reaction prompted a lively debate among observers wondering what was behind Xi's silence.

"Xi can't fail to be impressed by Trump's resolve. Xi will have to reassess what the Trump presidency means for Chinese interests in East Asia, particularly North Korea and the South China Sea," Australian military analyst Alan Dupont suggested, as cited by the New York Times.

Malaysian geopolitical analyst Mathew Maavak commented on the matter in his recent interview with Sputnik.

"I think Xi must have quietly realized that Beijing now has the upper hand in its dealings with the United States," Maavak believes.

© AFP 2020 / Leon Neal
China Remains Committed to Political Solution of Syrian Crisis, Xi Jinping Says
"If the intention was to intimidate China over North Korea's nuclear sabre-rattling, then Beijing will likely raise the stakes by providing an additional economic lifeline to Pyongyang," the Malaysian analyst suggested.

"Even if Trump had promised a quid pro quo in terms of tacit US recognition over Chinese territorial claims in the South China Sea, it won't go down well with US-friendly nations in ASEAN. Furthermore, no one would trust a US president who will attack a nation just days after proffering rapprochement, as was the case with Syria," he noted.

Indeed, a few days before the Pentagon's missile strike against Syria, the Trump administration signaled that the topping of Syrian President Bashar al-Assad was by no means the White House's priority.

"There may be several overlain messages here from Trump," Maavak noted, "Trump may have wanted to impress Xi with his knowledge of China's 'hardball' negotiation tactics, and may have mistaken the serious affairs of state with pulling a poker bluff in his casino."

According to the analyst, Trump failed to give his geopolitical competitors the shivers by authorizing the Syria strike, if that was his intention.

© REUTERS / U.S. Navy
US Top Diplomat Tillerson Claims China Ready for ‘Action’ on North Korea
"To attack Syria so peremptorily over specious charges — right after declaring a policy of accommodation with Damascus — reeked of a pathetic variation of Nixon's Madman Theory which was designed to intimidate geopolitical rivals with threats of irrational brinkmanship, including the nuclear option, in the late 60s and early 70s," he said.

"Trump's antics were made even more macabre by the painstakingly rehearsed Mandarin folk rendition from his grandchild before Xi and his wife. Remember, this was the man who boasted that he could 'win against China' by treating them to a McDonald's treat instead of a state dinner!" Maavak noted referring to Trump's 2015 election speech.

Maavak recalled that there were rumors that the child's mother and the president's daughter Ivanka Trump could have had cast the decisive lot to attack Syria.

"Any Chinese would have come away thinking that he was dealing with a stereotypical Western barbarian despite the requisite post-summit diplomatic politesse.  That is the real result no matter what Trump wanted to demonstrate to Xi!" Maavak believes.

Some observers say Trump has adopted a "stick-and-no carrots" approach to his geopolitical rivals. What is really behind the US President's toughened stance?

Commenting on the issue Maavak recalled that from the very beginning of Trump's presidency his political opponents had been throwing sand in his gears. However, the US president's Syria strike has become the game changer.

"Once relentless political opponents like John McCain, Lyndsey Graham and Hillary Clinton are now hailing Trump's attacks on Syria… Trump, as one pathetic hack put it, finally 'became president' after the strike on Syria.  That's how the fetid American swamp keeps its presidents afloat — by the willingness to generate and maintain wars," said Maavak.

© Sputnik / Mikhail Voskresenskiy
How US Missile Strike in Syria is Likely to Affect Russia-China Ties
Back in October 2016 Jeffrey D. Sachs, an American economist and director of The Earth Institute at Columbia University, warned Washington against launching "costly foreign adventures," predicting that the US may finally exhaust itself just like the USSR, which collapsed in 1991.

What does the future have in store for the Asia Pacific region in the wake of the US' Syria attack? Is the US really capable of waging an assertive military policy while suffering from "imperial overreach"?

"Trump probably knows that he can neither drain the swamp nor fix the US economy.  After the strike on Syria, there is every reason to believe that he will not even attempt to live up to any of his electoral promises and will instead use a series of low-intensity military brinkmanship worldwide to divert attention away from growing domestic economic woes," Maavak told Sputnik.

"The high-growth Asia-Pacific region might seek greater economic integration to avoid an impending US-style meltdown a la the 2008 Great Recession. The US strategy therefore might be one of fomenting instability, insecurity and friction between nations in the Asia-Pacific region," he suggested.

"The shadow state that warred against Trump will probably be calling the shots over all military and foreign policy matters. It will likely resume draconian social controls and surveillance over the US society. Who knows? Instead of the draining the swamp, Trump seems to be drinking heartily from it!" the geopolitical analyst said.