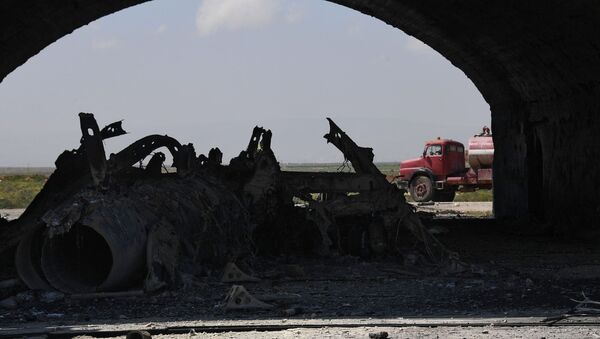 The decision by United States President Donald Trump to carry out a missile strike on an airbase in Homs is indicative of his geopolitical failure because this decision is likely to prompt Russia to form a military alliance with China, according to military analyst Konstantin Sivkov.

Erdogan Welcomes US Missile Strikes on Syrian Airbase, Says it's Not Enough
On Thursday, Trump said he ordered a missile strike on a Syrian airbase where the alleged chemical attack in Idlib was launched. The Pentagon launched 59 ship-based Tomahawk missiles from the USS Porter and the USS Ross. The missiles hit the Sha'irat base, killing five and injuring seven.

Moscow commented on the attack describing it as an "act of aggression against a sovereign state."

"The fact is that we no longer know what goals Washington pursued when deciding to carry out these strikes, but it is univocal that they are launched de facto in the interests of Daesh, al-Nusra Front and other terrorists. In this connection, we can only express regret," Kremlin spokesperson Dmitry Peskov told journalists.

"Having launched missile attacks on the Syrian airbase, Trump demonstrated pure madness, impulsiveness and a total geopolitical ignorance. This decision gives Russia and China no other choice but to form a strategic military and economic alliance. This is what Washington has tried to prevent in recent years," Konstantin Sivkov, head of the Russian Academy of Geopolitical Problems, told Radio Sputnik.

According to him, Moscow should focus on finding diplomatic ways to get out of the tense situation.

"I don’t think that a confrontation with the Americans in Syria would be in the interests of Russia. We need negotiations, but so far it is hard to tell how negotiations could be held," Buzhinsky noted.