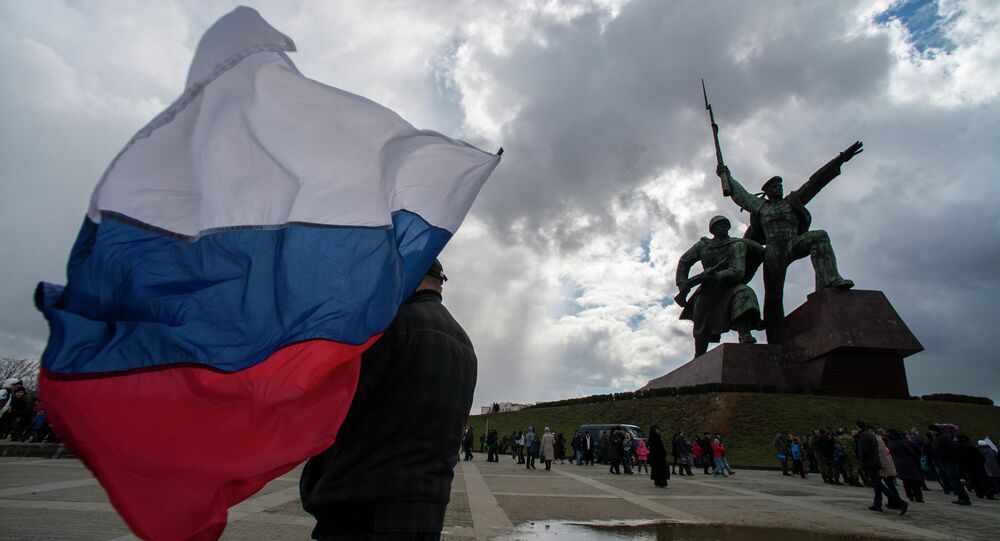 US President Trump has yet to articulate his foreign strategy, Russian political analyst Alexei Martynov said, commenting on the White House's "mixed signals" on Crimea. Apparently therefore new UN Secretary-General Antonio Guterres's statement on the peninsula's status was rather ambiguous.

© AP Photo / Evan Vucci
The Crimean Issue: What's Really Behind Trump's Message to Russia
US President Donald Trump's "mixed signals" on Crimea have stirred a listless debate in Europe, Alexei Martynov, Director of the International Institute of Modern States, noted in his interview with Radio Sputnik.

"President Trump has made it very clear that he expects the Russian government to de-escalate violence in the Ukraine and return Crimea," White House spokesman Sean Spicer told a daily news briefing Tuesday.

At the same time, Spicer underscored that the US President wants to be able to get along with Russia, "unlike previous administrations, so that we can solve many problems together facing the world, such as the threat of ISIS [Daesh] and terrorism."

The next day Trump reiterated that Crimea was "taken" by Russia.

​"Crimea was TAKEN by Russia during the Obama Administration. Was Obama too soft on Russia?" the US President tweeted.

However, during the election campaign Trump signaled that he was "going to take a look at" the option of recognizing Crimea as part of Russia.

"The people of Crimea, from what I've heard, would rather be with Russia than where they were [Ukraine]. And you have to look at that," Trump told ABC News in July 2016.

The President's "mixed signals" have prompted some analysts to assume that Trump's recent statement was an attempt to appease the US establishment following the resignation of his former national security adviser General Michael Flynn.

"Trump's statement on Crimea was an attempt to appease the anti-Russian US establishment," Vladimir Batyuk, a senior expert with the US and Canada Institute in Moscow, told Radio Sputnik Thursday.

Answering La Stampa's question whether "Russia's presence in Crimea is acceptable," Guterres did reply directly to the question but referred to the principle of territorial integrity of UN member states.

"I think it is clear that there are some essential principles, and one of them is territorial integrity of UN member countries. It is still valid, and my hope is that the international community can ensure these principles," the UN Secretary-General said.

Commenting on Guterres' remark Martynov called attention to the fact that the statement was rather ambiguous.

The crux of the matter, according to Martynov, is that Europe is used to coordinating its stance with that of Washington. However, the Trump administration's foreign policy has yet to take shape and its major imperatives remain unclear for Europeans.

"For decades European and Western policies in general have been under US diktat. It has a consequence. They have simply lost the ability for independent analysis and assessment of events," Martynov believes.

© AFP 2021 / ARMEND NIMANI
'Independent' Kosovo: 'Failure' of One of the West's Most Expensive Political Projects
The political analyst recalled that the much discussed principle of territorial integrity of UN member states has been repeatedly violated since the collapse of the USSR.

Speaking to Sputnik back in November 2015, Serbian politician and geopolitical analyst Dragana Trifkovic highlighted that after the collapse of the USSR Washington and its NATO allies have redrawn the European borders "according to their needs."

"Since the breakup of the Soviet Union, the United States has been redrawing the borders in Europe according to their needs, starting from the Balkans. Serbia was bombed just because it did not voluntarily consent to the American occupation," Trifkovic said.

Meanwhile, Russia's Federation Council's Committee on Defense and Security Olga Kovitidi argues that the Texas annexation of 1845 could be considered as a legal precedent.

Back in 1836 the Republic of Texas declared independence from the Republic of Mexico. At that time vast majority of Texas' population sought to join the United States. In March 1845, then-US President John Tyler signed the annexation bill and Texas ratified it with popular approval.

Kovitidi emphasized that just like Texas, Crimea had a Constitutional right to declare independence and drew attention to the fact that by the time of the referendum that took place in March 2014 the Republic of Crimea had its own Constitution, a flag, a coat of arms and a hymn.

"The history of the incorporation of the Republic of Texas in the United States indicates that there is an international precedent which gives the legal basis for the international community to reconsider its position toward Crimea's reunification with the Russian Federation," Kovitidi underscored, adding that in this light the anti-Russian sanctions could be regarded as illegal.

The Russian Senator suggested that this historical precedent could have been behind Trump's promise to "take a look" at the option of recognizing Crimea as a part of Russia.

"We will see whether or not Trump is man of his word in actual steps of the new White House's occupant," Kovitidi said, as quoted by RIA Novosti.