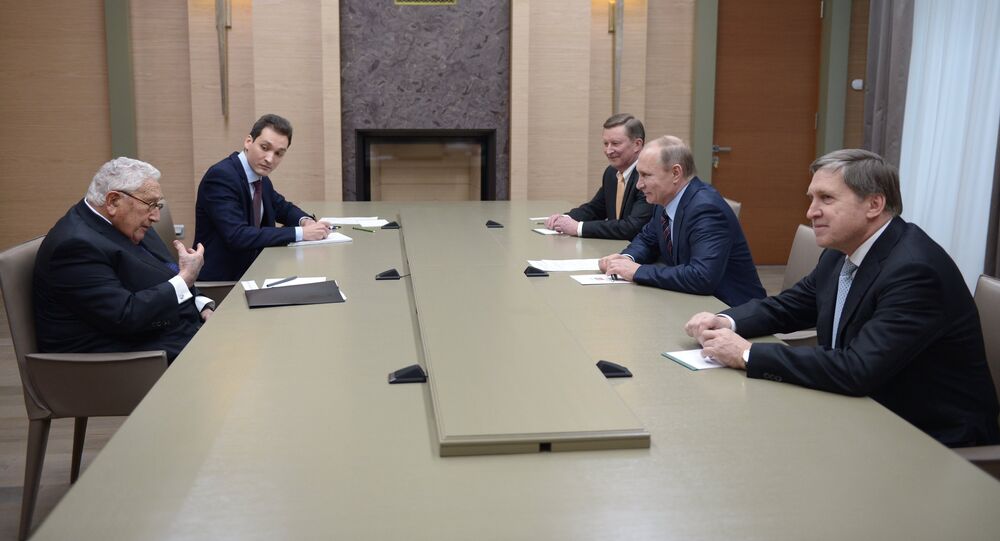 US political scientist and former diplomat Henry Kissinger has endorsed Trump's pragmatic approach toward Russia. However, there are questions as to what really lies behind Kissinger's turn toward Moscow and whether the US establishment will lend its sympathetic ear to Kissinger's advice or continue to throw sand in Trump's gears.

Henry Kissinger, former US Secretary of State and ex-Assistant to the President for National Security Affairs, believes that Washington and Moscow should turn towards each other and start a serious dialogue.

Russia Has 'Secured the Equilibrium of the World' Many Times

"President Trump has indicated that he would favor a less confrontational and more political approach [toward Russia]. I agree with the general attitude," he pointed out.

"I think Russia is a country with a very special history, of eleven times zones, touching Asia, the Middle East and Europe. Its impact on all these areas is considerable. It has been the cause of many tensions but also securedthe equilibrium of the world in the face of challenges from Asia and from various countries in Europe," Kissinger emphasized.

© Photo : U.S. Air Force
Cyber-Hacking Report: US Establishment 'To Go to the Mat' to Prevent Trump's Détente With Russia
The US politician expressed hope that an effort will be made to achieve a serious dialogue in order to avoid "a drift towards confrontation." He underscored that Europe, America and Russia need to come to some agreement "about the limits within which military pressure is carried out."

"That is, what I think, one of the major tasks of the new administration," Kissinger stressed.

In the past few years the former American diplomat has repeatedly advocated establishing working relations between the US and Russia, and with good reason.

As Kissinger noted in his op-ed for The National Interest, "in the emerging multipolar order, Russia should be perceived as an essential element of any new global equilibrium."

In his recent Davos speech, Kissinger reiterated that the global order the US and EU were familiar with is fading away.

"One of the key problems of our period is that the international order with which we were familiar is disintegrating in some respects, and that new elements from Asia and the developing world are entering it," Kissinger pointed out Friday.

In light of this, it is no surprise that Kissinger sees Trump's approach toward Russia largely as a step in the right direction.

Citing information obtained by Western European intelligence from Trump's transition team, the German newspaper  wrote in late December that Kissinger has repeatedly met with Trump in the past couple of months and that the White House is likely to go for "constructive cooperation" with the Kremlin.

But that's half the story. According to Lake, it was Kissinger who urged Trump to nominate Rex Tillerson as Secretary of State and recommended his former assistant K.T. McFarland to be Flynn's deputy.

"Kissinger is one of the few people in Trump's orbit who can get him on the phone whenever he wants, according to one transition adviser," Lake noted.

Vladimir Batyuk, a senior expert at the Institute for US and Canadian Studies at the Russian Academy of Sciences, believes that Kissinger's involvement in shaping a potential détente between Moscow and Washington is very possible and that is good news.

"Kissinger could have been involved in the development of a new conception of US-Russia ties because he has already played the role of an unofficial mediator between Moscow and Washington. He is very well-respected in the US and Russia. And he deserves his reputation," Batyuk told RIA Novosti.

"Such a classic of political realism could help overcome the deadlock in relations between the US and Russia," he stressed.

However, Brazilian journalist Pepe Escobar argues that Kissinger's plan is actually aimed at intervening in the Sino-Russian rapprochement, which he believes presents a major foreign policy dilemma for the US.

"I have argued that Trump's foreign policy guru Henry Kissinger's strategy to deal with the formidable Eurasia integration trio — Russia, China and Iran — is a remixed Divide and Rule; seduce Russia away from its strategic partnership with China, while continuing to harass the weakest link, Iran… In fact that's how it's already playing out," Escobar emphasized in a recent op-ed for Sputnik.

It appears that Escobar's concerns are not completely groundless, given the controversial role Kissinger played in driving the USSR and China apart in the 1970s. That strategy became known as "triangular diplomacy."

John Pomfret of the Washington Post has called attention to the fact that 45 years ago Kissinger had managed to pit Moscow and Beijing one against the other by placing an emphasis on closer cooperation with the Chinese. The journalist asked whether Trump will adopt a similar strategy, this time "making a 'pivot' toward Moscow, and away from Beijing."

Interestingly enough, less honey-tongued and more frank US geostrategist Zbigniew Brzezinski openly speaks about the necessity to drive a wedge between China and Russia.

"The US must be wary of the great danger that China and Russia could form a strategic alliance, generated in part by their own internal, political, and ideological momentum, and in part by the poorly thought out policies of the United States," Brzezinski said in his speech at the Nobel Peace Prize Forum in Oslo, Norway, in December 2016.

"Nothing is more dangerous to the US than such a close connection," Brzezinski highlighted.

The Empire Needs to Take a Break

However, there could be yet another explanation for Kissinger's purported plan for a US-Russian détente.

As Jeffrey D. Sachs, an American economist and director of The Earth Institute at Columbia University, pointed out in his op-ed for the Boston Globe, the US currently suffers from "imperial overreach" and needs to pause to catch its breath.

"The end of the Cold War, in 1991, should have been the occasion for a fundamental reorientation of US guns-versus-butter policies… Alas, the blinders and arrogance of American imperial thinking prevented the United States from settling down to a new era of peace," he stressed.

Only time will tell how the US, Russia and China will solve their new geostrategic dilemmas in the emerging multipolar world order.

However, it is clear that Trump's efforts to develop working relations with Russia are likely to face fierce resistance from the US political establishment. It remains an open question whether or not the new generation of American hawks will lend a sympathetic ear to Kissinger's advice.