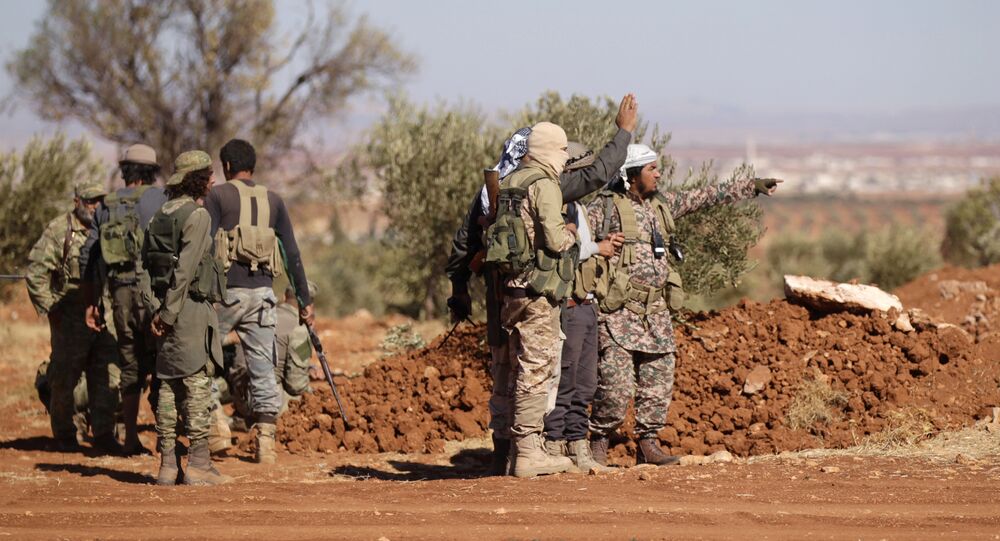 On Friday US President-elect Donald Trump signaled that he looking forward to establishing much-discussed "safe zones" in Syria.

© Sputnik / Mikhail Voskresenskiy
Assad: Trump May Be 'Natural Ally' for Syria in Fight Against Terrorism
"Our foreign policy needs a new direction… For too long we have been moving from one reckless foreign intervention [to another]… Instead of rebuilding foreign nations, it is time to rebuild our nation," he underscored.

Following Trump's win this November Syrian President Bashar al-Assad suggested in his interview with Portuguese television broadcaster RTP that if the US President-elect joins the fight against terrorists being waged by Russia, Damascus and Iran he may become Syria's "natural ally."

"So, we cannot tell anything about what he's [Trump] going to do, but if, let's say if he is going to fight the terrorists, of course, he will become an ally, natural ally in that regard with Russia, Iran and many other countries which seek to defeat the terrorists," Assad said.

Commenting on the matter, Russian analyst and former diplomat Vyacheslav Matuzov told Radio Sputnik that actually the US President-elect has raised an important issue.

"Syria lies in ruins and those who destroyed it should take part in its reconstruction. Donald Trump's statement shows that we can reach common ground [with the US] while dealing with the Syrian humanitarian catastrophe caused by criminal policies of the Obama administration and some Arab countries," Matuzov pointed out.

The former Russian diplomat underscored that its hard to argue with the claim that Saudi Arabia should contribute to Syria's reconstruction, since all Arab countries should participate in this effort.

"Syria needs substantial financial support and most notably from Arab countries, which are Syria's brotherly countries. Syria is part of the Arab League," Matuzov emphasized.

© Sputnik / Mikhail Alayeddin
US Approval of Arms Supplies to Syria to Benefit Militants, Fuel Crisis - Russian Lawmaker
At the same time the Russian expert doubted that the US President-elect will revise relations with Saudi Arabia, America's longstanding ally in the region.

"It's not in America's interests to revise relationships with leading Arab countries," Matuzov believes.

In his opinion Trump's statement is meant to exert some pressure on the Saudi leadership. At the same time it sends a signal to Riyadh that it now needs to comply with Washington's new foreign policy course.

A year ago geopolitical analyst Tony Cartalucci noted in his op-ed for New Eastern Outlook online magazine that the so-called "safe zones" or "buffer" zones could be used by Washington to fragmentize Syria.

© REUTERS / Kevin Lamarque
How Aleppo Was Liberated After Months of Diplomatic Rows
He cited Richard Haas, the President of the Council on Foreign Relations (CFR) who came up with the plan to create "relatively safe enclaves" in Syria in his October op-ed published in 2015.

"A Syria of enclaves or cantons may be the best possible outcome for now and the foreseeable future. Neither the US nor anyone else has a vital national interest in restoring a Syrian government that controls all of the country's territory," Haas suggested.

Matuzov believes that Trump's plan to build safe zones will work only if Damascus preserves its control over these territories.

"The creation of safe zones [in Syria] should not mean bringing them out of control of the Syrian legitimate government," the former Russian diplomat highlighted.

"I believe that 'safe zones' could mean only one thing — to keep territories safe against terrorist groups Syria is suffering from," he explained, "If Trump meant exactly the same thing we will have no problems with it."