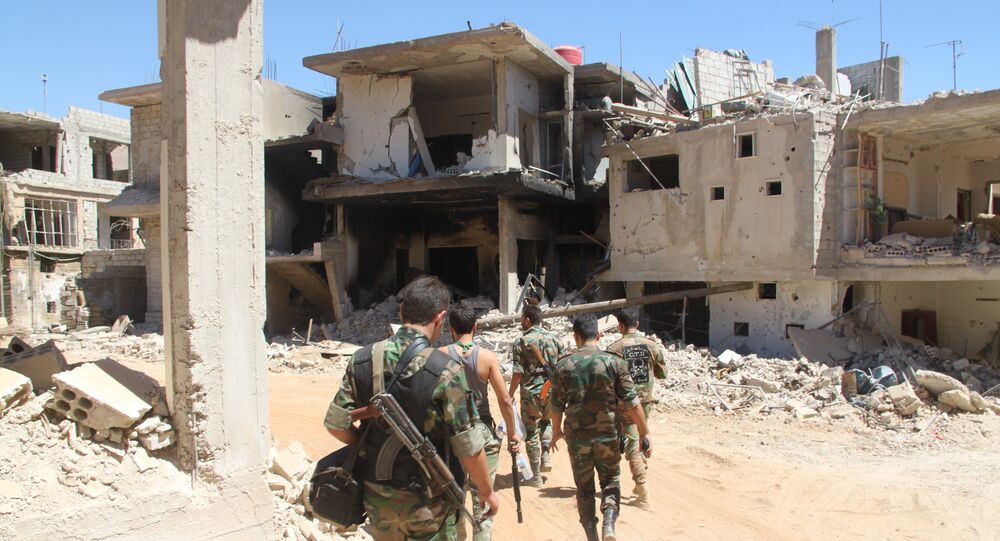 "In a desperate last bid, the US may try to seize and expand 'buffer zones' within Syrian territory in the hopes that these expansions can at least Balkanize Syria before Russia and Syria are able to roll back terrorist forces from most vital regions. It will be a race between Russia and Syria's ability to drive out terrorists and stabilize liberated regions and America's ability to bolster terrorists in regions along the border while obtaining public support for providing these terrorists with direct US-NATO military protection," Cartalucci emphasized in his article for New Eastern Outlook.

© AFP 2020 / ARMEND NIMANI
US Policymakers Mull Over Using 'Refugees as Human Shields'
The idea is not new, the researcher pointed out, adding that the concept of buffer zones had been proposed by US policymakers as early as 2012.

Cartalucci noted that in late June 2015 the Brookings Institution, an influential US policy think tank, published a report entitled "Deconstructing Syria: A new strategy for America's most hopeless war."

The authors of the report proposed that "moderate rebels" should establish "reliable safe zones within Syria."

"The end-game for these zones would not have to be determined in advance. The interim goal might be a confederal Syria, with several highly autonomous zones and a modest (eventual) national government," the paper elaborated.

The Brookings Institution's analysts added that "the confederation would likely require support from an international peacekeeping force, if this arrangement could ever be formalized by accord."

© AP Photo / Hadi Al-Abdallah
US War in Syria, Iraq Part of Bigger Plan Aimed Against Iran and Beyond
However, the ultimate goal is to train and equip more recruits within the zone in order to expand it.

Interestingly enough, an idea similar to the concept Cartalucci refers to was voiced by former CIA analyst Kenneth M. Pollack in September 2014. In his article "An Army to Defeat Assad" Pollack proposed to form, arm and train an opposition army in order to fight President Bashar al-Assad and ISIL. According to Pollack's plan, the opposition army should occupy the territory of Syria step-by-step.

"Once the new army gained ground, the opposition's leaders could formally declare themselves to represent a new provisional government. The United States and its allies could then extend diplomatic recognition to the movement…  In the meantime, areas controlled by the US-backed army would require a provisional authority — ideally, a special representative of the UN secretary-general who would retain sovereignty until a new government was ready," he wrote in his piece for the Brookings Institution.

Russia's involvement in Syria has upset Washington's applecart. However, US war planners and geostrategists have not given up.

Cartalucci quoted Richard Haas, the President of the Council on Foreign Relations (CFR) who published an op-ed titled "Testing Putin in Syria" on October 15, 2015.

Haas points out that "relatively safe enclaves" should emerge as a result of the US effort in Syria.

"A Syria of enclaves or cantons may be the best possible outcome for now and the foreseeable future. Neither the US nor anyone else has a vital national interest in restoring a Syrian government that controls all of the country's territory," Haas stressed.

According to Cartalucci, in essence these zones would constitute "a de facto NATO invasion and occupation."

"The territory seized would be used as springboards to launch attacks deeper still into Syrian territory until eventually the entire nation was either permanently Balkanized or destroyed," the geopolitical researcher explained.

© AFP 2020 / LOUAI BESHARA
How Washington Squandered Numerous Opportunities for Peace in Syria
To imagine what Syria is facing, one should take a look at Afghanistan, Iraq and Libya, Cartalucci remarked.

US political analyst Phil Butler noted in his recent interview with Sputnik: "the current [Washington's] mission in Syria is not intended to be a Korean War-era partitioning, but a splintering as we saw with Kosovo."

Cartalucci also called attention to the fact that during the recent US Senate Committee on Armed Services hearing, retired US Army General John Keane was also pushing ahead with the idea of 'free zones' in Syria.

Furthermore, the general went even so far as to offer to populate these zones with Syrian refugees in order to halt Russian airstrikes against terrorists.

"If we establish free zones — you know, for moderate opposition forces — but also sanctuaries for refugees, that gets world opinion support rather dramatically. If Putin is going to attack that, then world opinion is definitely against him," General Keane noted at the latest US Senate hearing on the Russian military campaign.

"The Russians, Syrians, Kurds, and Iranians are strangling NATO's proxies at their very source and instinctively, so NATO has raised its hands in the form of a 'buffer zone' to defend them and relieve the pressure — thus revealing the true nature of this regional conflict and the central role the West has played in creating and perpetuating ISIS [ISIL], al-Qaeda, and other extremists currently ravaging Syria and beyond," the geopolitical researcher concluded.

Russia-Syria Cooperation Should Not Prevent US From Working With Moscow